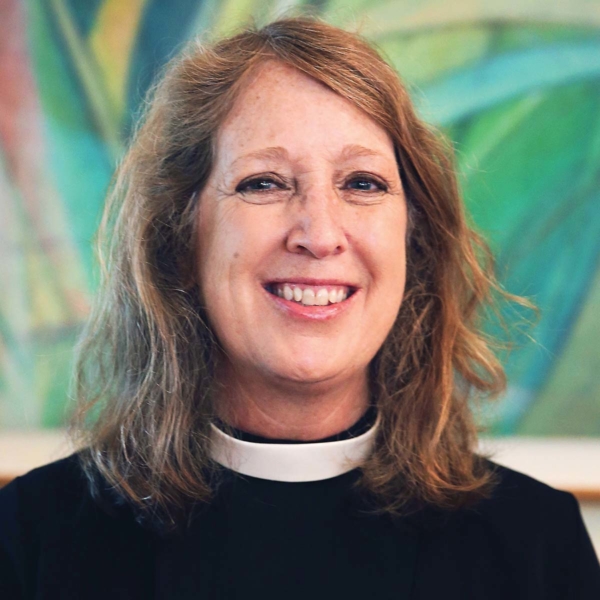 The Rev. Cathleen Chittenden Bascom, from the Diocese of Iowa, was elected Oct.19 as the 10th bishop to lead the Episcopal Diocese of Kansas.

[Diocese of Kansas] The Rev. Cathleen Chittenden Bascom, from the Diocese of Iowa, was elected Oct. 19 as the 10th bishop to lead the Episcopal Diocese of Kansas. She was elected on the second ballot during an election that took place in the worship space of Grace Cathedral in Topeka, receiving 64 votes from lay delegates and 56 votes from clergy.

Bascom is the first woman to be elected bishop since the diocese was formed in 1859.  This also marked the first time in the history of the Episcopal Church that a bishop heading a diocese was elected from a slate of candidates who all were women.

The Very Rev. Foster Mays, president of the governing body that has overseen the diocese in the interim period between bishops, said, “It delights me that Cathleen Bascom will be our next bishop. While this election was historic, at its core lay delegates and clergy were selecting the person who will lead this diocese for the next decade or more. I believe Mother Bascom’s many gifts and years of experience will serve this diocese well.

“I know that clergy and lay leaders from all our congregations are looking forward to the opportunity to participate in ministry with her, to share together the good news of Jesus and to serve the world in the name of our Lord. I’m very excited for the future of the Episcopal Diocese of Kansas under her leadership.”

Bascom has been serving since the fall of 2014 as Assistant Professor of Religion and Philosophy at Waldorf University in Forest City, Iowa. She previously had been dean of the Cathedral Church of St. Paul in Des Moines, Iowa, as well as rector of St. Stephen’s in Newton, Iowa.

She served for eight years in the Diocese of Kansas from 1993 to 2001, leading ministry efforts at Kansas State University in Manhattan.

She also is the second priest to become Kansas’ bishop while serving in the Diocese of Iowa. The first was Thomas Vail, the diocese’s first bishop, who was rector of Trinity Church in Muscatine, Iowa, when he was elected bishop in 1864.

The service of ordination and consecration by which Bascom becomes a bishop and assumes responsibility for the pastoral and administrative work of the diocese, will take place on Saturday, March 2, 2019, in Grace Cathedral, Topeka. The chief consecrator will be Presiding Bishop Michael Curry.

The Episcopal Diocese of Kansas, based in Topeka, includes 44 churches across the eastern 40 percent of the state. It includes more than 10,000 baptized members with more than 70 active priests and deacons, of whom 43 percent are women.