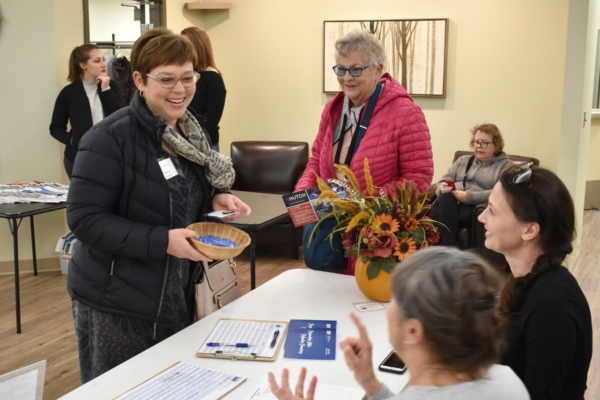 The Rev. Devon Anderson, rector of Trinity Episcopal Church in Excelsior, Minnesota, checks in at the candidate event co-hosted by the church Oct. 16 at the South Shore Community Center in Shorewood. Photo: David Paulsen/Episcopal News Service

[Episcopal News Service – Shorewood, Minnesota] Within this politically “purple” state, the Rev. Devon Anderson describes her congregation at Trinity Episcopal Church as a “purple parish,” neither red nor blue but with parishioners who bring viewpoints that fall all along the political spectrum.

Purple isn’t an easy color for a parish, especially in these increasingly partisan times. Parishioners at the church in Excelsior, Minnesota, where Anderson is rector, had long felt uncomfortable sharing their political views, and some preferred avoiding such topics altogether at church.

Today, the parish is embracing its political diversity rather than hiding from it. Several church volunteers proudly sported their Trinity name badges as they helped stage a local candidate event Oct. 16 at a community center in the adjoining city of Shorewood, about five miles north of the convention center in Chaska where the Episcopal Church’s Executive Council is meeting this week.

The event, through a partnership with the local chamber of commerce and League of Women Voters branch, was part of Trinity’s effort to turn what could be a liability into an opportunity for promoting open, civil discourse. Anderson sees the congregation as a kind of “incubator” for compassionate dialogue across political divides.

“If we have this parish – we care about each other, we celebrate the sacraments together, we’re really focused on building relationships with each other – could we not also use that as a training ground for being out in the community as respectful, kind people?” said Anderson, who is a member of Executive Council.

On this Tuesday evening, that plan seemed to be hitting its mark. A roar of conversation filled the South Shore Community Center as dozens of voters met with candidates for office in communities around the Twin Cities’ west suburbs. Signs, buttons, postcards and banners – Tonka Bay mayor, Hennepin County sheriff, Excelsior City Council, Minnesota House of Representatives – decorated all corners of the room, and some candidates placed cookies on the assigned card tables to sweeten their pitches for support. 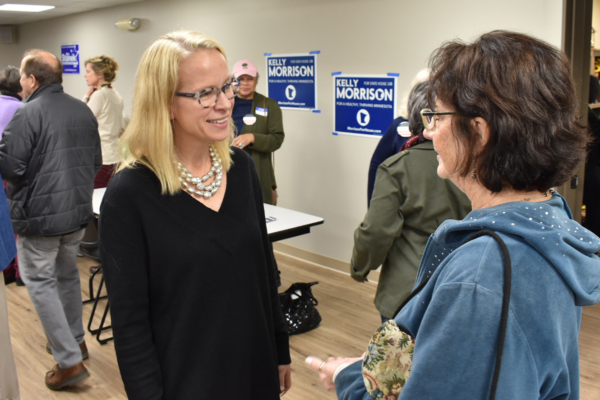 One of the candidates, Kelly Morrison, who is running for a state house seat, is also a member of Trinity. She has been inspired by her church’s efforts to encourage people to talk and listen without prejudging each other based on political beliefs.

“I’m a proud Democrat, but I don’t want conversations to end before they begin,” Morrison told Episcopal News Service. “We’re all on the same team.”

She also thinks Christian teachings, such as loving your neighbor and welcoming the stranger, help inform Christians’ actions as they enter the public sphere. They’re “what all of this should be about,” Morrison said.

Fellow Trinity member Bev Lane, who had volunteered as a greeter at the candidate event, shares that support for the congregation’s efforts.

“When you know the people, you understand them,” Lane said. “I think that we have to be more civil. We have to get along, even though we have differing opinions.”

Gary Veazie, who works part time as facility manager at Trinity, on this occasion was in charge of setting up refreshments in the community center room. He stood watch over the table of snacks and drinks. 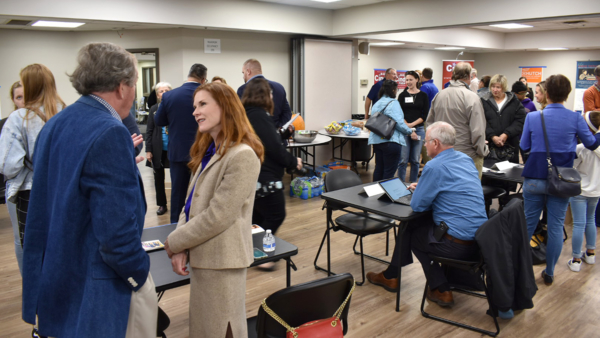 Candidates for local election in the west suburbs of the Twin Cities talk with voters Oct. 16 at the community center in Shorewood. Photo: David Paulsen/Episcopal News Service

Veazie started attending worship services at Trinity in 1980, and he had high praise for the congregation’s several rectors over the years. Anderson, too, is known for giving a “top-level sermon,” he said – including sermons that draw connections between the Gospel and current events, “which is a hard line to walk.”

One particularly difficult sermon in 2016 helped focus the congregation on its civil discourse work.

The presidential election left Anderson in a “panic,” she admitted in her sermon that November, not from her own views on the outcome, but because she wasn’t sure how to unify a congregation with such divergent reactions to Donald Trump being elected president.

Some parishioners were cheerful, while others were in shock. “How are we going to continue together?” she thought.

She found her answer in the very congregation that seemed so divided. “We need church and Christian community more than ever, because within it we can practice the kind of peace and unity we so desire for our country,” Anderson told her congregation.

Minnesota narrowly voted for Hillary Clinton in 2016, but the state’s counties are a patchwork of blue and red, with the bluest centered around the metro areas of the Twin Cities, Rochester and Duluth. Hennepin County, home to Minneapolis, went solidly Democratic; however, Anderson said, Excelsior and other west suburbs are more politically diverse and lean more conservative than Minneapolis.

Trinity Episcopal Church already had begun encouraging parishioners to be more open about their political views and listen to each other respectfully. An early catalyst was Minnesota’s adoption of a law in 2013 legalizing same-sex marriage in the state.

As with other political issues, parishioners’ views on gay marriage varied widely, and “the congregation had never had a conversation about it,” Anderson said. Trinity would need to decide whether it would offer same-sex ceremonies, but first it enlisted a consultant from the University of St. Thomas, located in St. Paul, to coach parishioners as part of the school’s Civil Discourse Lecture Series.

“We needed to learn how to create a safe space for people to really be able to express how they felt, and so we learned a methodology for doing that,” Anderson said.

After strengthening the congregation’s civil discourse skills, the vestry called an all-parish meeting to discuss offering the sacrament of marriage to all people. Parishioners were encouraged to put their newly developed skills to work as they listened to members sharing their views one at a time. The meeting felt like a liturgical experience, Anderson said, as each speech was followed by a moment of silence and hymn singing.

The meeting was well attended and lasted several hours, she said, and when the vestry later voted to offer same-sex ceremonies, it was not the divisive decision it otherwise could have been.

“It was a real moment for the parish,” Anderson said. “Because it was like, we can actually do this. We can be diverse in our opinions, in our political opinions, and we can still be a really close worshiping community.”

Such an approach worked for Trinity, but it need not end there.

“I think this kind of thing should be the leading edge of the Episcopal Church,” said Betty Bright, a vestry member who was volunteering at the candidate meet-and-greet event. “For me, it’s about being open to each person’s heart.” 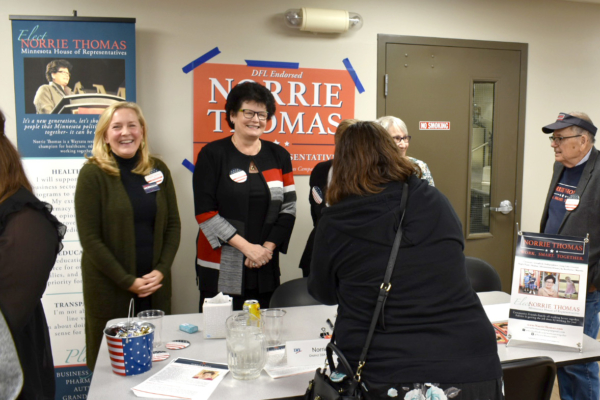 Fellow vestry member Christopher Williams also attended the event and was pleased by the turnout. Some Episcopalians may attend worship services and just want to hear the Gospel, without talking about how it may apply to contemporary life, he said, but opening paths of conversation across differences can broaden people’s thinking, within the congregation and beyond.

“I think it’s great,” Williams said. “I think it adds a lot to any conversation you’re going to have, with anybody about anything.”

A small team of volunteers from Trinity had been working to host candidate forums at the church, but they struggled to get candidates to commit, Anderson said. In the meantime, the volunteers turned their focus toward supporting the meet-and-greet event Oct. 16.

Monica Wiant, a vestry member and one of the event volunteers, credited Anderson for pressing the congregation not to shy away from conversations just because they may seem uncomfortable. The all-parish meeting on same-sex ceremonies was a big step, she said.

“It was just terrific,” Wiant said. “Because not everybody agreed, but there was a lot of mutual support and listening.”

Wiant, who described herself as “proudly liberal,” was among those parishioners shocked and unsettled by the presidential election, and she appreciated Anderson’s invitation to come together as a faith community. “The church needs to be a place where we can bring those emotions and work through it,” Wiant said.

Whether Republican or Democrat, they are all Christian.

“I think spiritually we have a lot of common ground, regardless of how we vote,” Wiant said.