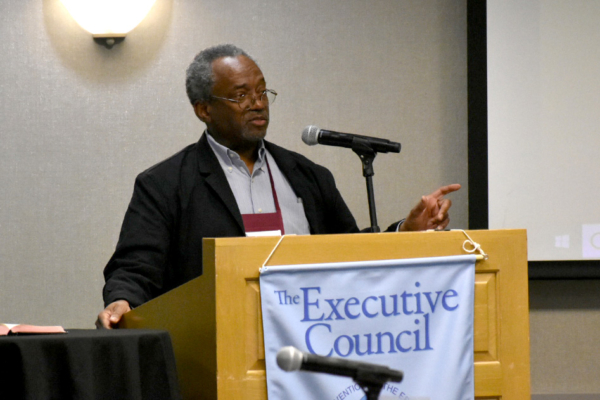 [Episcopal News Service – Chaska, Minnesota] The Episcopal Church’s Executive Council kicked off its first meeting since the 79th General Convention on Oct. 15, gathering in a conference center in this Twin Cities suburb to begin discussing how to align church operations with the priorities and mandates established in July.

The 40 voting members of Executive Council and additional nonvoting members represent a broad mix of races, ages, genders and places of origin. One example was Table 4, where Honduras Bishop Lloyd Allen sat across from the Rev. Devon Anderson, rector at the nearby Trinity Episcopal Church in Excelsior, Minnesota. The Rev. Gay Clark Jennings, House of Deputies president, lauded the group for its diversity – “more diverse than it was at last triennium, and I think God for that.”

Presiding Bishop Michael Curry opened the morning session at Oak Ridge Hotel & Conference Center by using a passage from the Gospel of John to set the tone for this four-day session: “I am the vine, you are the branches,” Jesus said during his Last Supper. “Those who abide in me and I in them bear much fruit, because apart from me you can do nothing.”

Curry came back to those lines several times during remarks that ran about 20 minutes. The church “loses its soul the further it gets away from Jesus of Nazareth,” he said, but the work of the Executive Council will build on the movement of Christians seeking to reclaim what it means to be followers of Jesus and his teachings.

“I know that it’s easy for fads to come and go, and yet it is my deep and earnest prayer that our embracing what it means to be the Jesus Movement will not be a fad that comes and goes,” Curry said.

The Episcopal Church put its beliefs into action through more than 500 resolutions passed at the 79th General Convention in Austin, Texas. “Our structures for translating, processing and disseminating strained at the sheer volume” of resolutions, Jennings said, but she was heartened rather than troubled by the numbers. A record number of resolutions shows Episcopalians are energized by their faith.

She also was encouraged by the stunning number of people – 1,200 – who have volunteered to serve on one of the interim bodies that continue the work of General Convention during the triennium.

“The good news is 1,200 people want to be involved in the work between conventions,” Jennings said. 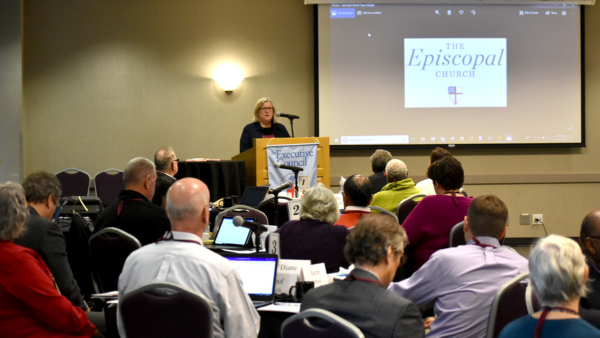 Jennings opened her remarks by briefly recapping General Convention and couldn’t help getting in final references to the General Convention Pigeon and some deputies’ love of Voodoo doughnuts. Lighter moments aside, during the two weeks in Austin, the bishops and deputies led the church in confronting some of the most pressing issues facing society today, including immigration and gun violence.

At convention, the House of Bishops held a “Liturgy of Listening” to tell the stories of sexual abuse and exploitation, including within the church, drawing attention to these issues “that too many church leaders have refused to acknowledge and have only become more urgent since convention concluded,” Jennings said.

In February, Jennings appointed a 47-member Special Committee on Sexual Harassment and Exploitation to lead the church’s efforts, and those efforts will accelerate in the new triennium, Jennings said Oct. 15. She also referenced her guest post published Oct. 8 in The Christian Century, which she wrote in response to the sexual assault allegations against Justice Brett Kavanaugh made by psychology professor Christine Blasey Ford.

Executive Council’s responsibility is to carry out the programs and policies adopted by the General Convention, according to Canon I.4 (1).

Curry, as presiding bishop, serves as president of Executive Council, and Jennings is vice president. Twenty members of Executive Council – four bishops, four priests or deacons and 12 laypeople – are elected by General Convention to six-year terms, with half of those members elected every three years. Each of the Episcopal Church’s nine provinces elects an ordained member and a lay member for six years, and those elections also alternate every three years.

The agenda for the first day of this Executive Council meeting was light on legislative business, though the group voted in the morning to establish a new roster of committees based on the priorities set by General Convention under Curry. They are Finance, Government & Operations, Mission Within the Episcopal Church, and Mission Beyond the Episcopal Church. 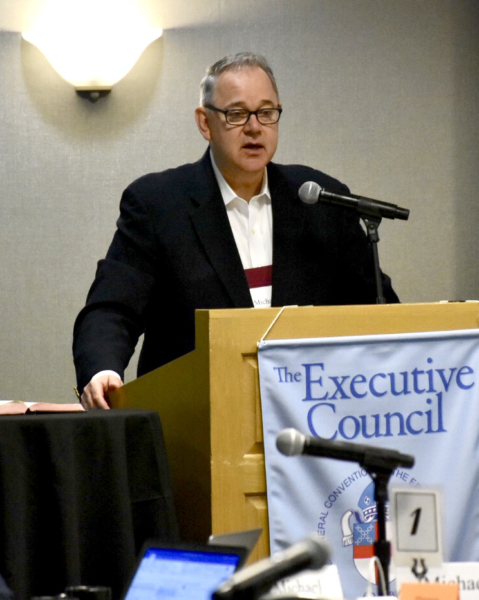 The Rev. Michael Barlowe, secretary of General Convention, sought to frame the Executive Council’s business this week partly as an attempt to bridge the gap between the churchwide and the local. “The further you get from the local congregation,” he said, “the more remote things can sometimes seem.”

The next Executive Council meeting will be Feb. 21-24 in Midwest City, Oklahoma. Future locations have yet to be announced.

Curry, in his remarks, also alluded to unspecified organizational “crises” within the Episcopal Church that had been hindering its spiritual work. “Every crisis is a disguised opportunity; you just have to figure out what it is,” he said. “We realized we needed to do something different.” One of those things was hiring a personnel consultant to study the workplace culture of the churchwide offices and help church leaders improve that culture.

“Through it all, we’re going to love each other and take care of each other,” he said.

Curry was more pointed in making his case for “reclaiming Jesus,” invoking an initiative that he and other ecumenical leaders launched earlier this year to refocus the broader culture on Jesus’ teachings. Certain far-right evangelical preachers don’t even mention Jesus, Curry said, but they speak with a “religious intonation” that sounds Christian but is actually political.

“Christianity is being hijacked in public perceptions of what it means to be Christian,” Curry said.

By trying to reclaim the Jesus of love and compassion, he said he wasn’t making a political commentary, though “it may have political consequences.”

“That’s what I believe we need, not just in the church,” he said. “I’m talking in the culture – a revival of the way of being Christian that looks something like Jesus, the Jesus that said ‘love is what it’s all about.’”

When the group reconvened after lunch, Curry spoke briefly about the “Way of Love,” a rule of life that he, his staff and leaders from around the church developed to help Episcopalians practice being part of the Jesus Movement in their own lives and communities.

Russell Randle, a lay member from the Diocese of Virginia, offered praise and thanks for the Way of Love, which Curry had unveiled during General Convention.

“For the first time, really, in my memory our wider church has put in the hands of people a very able and effective tool to make people at the individual and parish level more effective witnesses of the Gospel,” Randle said. One of the resolutions at Virginia’s upcoming convention would ask parishes how they plan to implement the Way of Love locally, he said.

Allen, bishop of Honduras, who spoke through an interpreter, emphasized the need to change how the church reaches the younger generation, including through smarter use of technology and rethinking what church should be in today’s world.

“Jesus Christ has challenged us,” Allen said. “Jesus Christ is challenging this church. … Let’s leave our old ways behind, and let’s do what Jesus called us to do.”

The Executive Council’s mandate is to provide top-level leadership for the church during the triennium, but Allis Freeman worried that most Episcopalians don’t understand its function.

She urged the church to communicate that mission more widely, adding this is one way to improve outreach to young people.

As if on cue, much of the rest of the afternoon was devoted to a presentation about the role of the Executive Council, led by Sally Johnson, chancellor for the president of the House of Deputies, and Douglas Anning, chief legal officer.