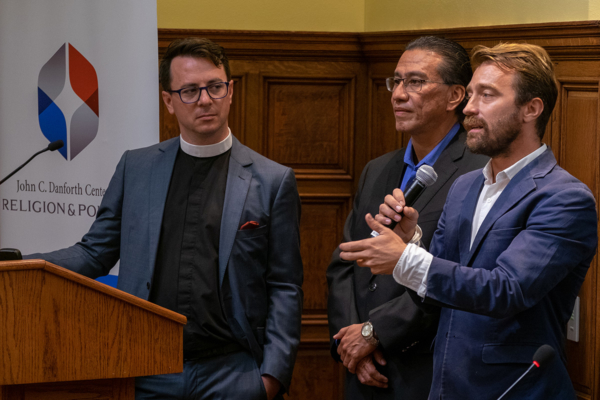 [Episcopal News Service – St. Louis] A human rights group in El Salvador founded by Episcopal clergy is using the courts to force the government there to live up to its responsibility to protect hundreds of thousands of citizens internally displaced by rampant violence, criminal and otherwise.

And when such refugees from violence come to the United States, this country also has a responsibility to give them safe haven, said Noah Bullock, the executive director of Cristosal, in a symposium on a faith-informed response to immigration and violence on Oct. 8 at Washington University in St. Louis.

“No person can be denied a place on planet Earth where they can be free of persecution,” said Bullock, speaking at the university’s John C. Danforth Center on Religion and Politics, named after U.S. Sen. John Danforth, a Missouri Republican and Episcopal priest.

Contrary to popular opinion, Bullock said, the typical immigrant crossing the southern border of the United States is no longer a Mexican looking for work, but someone from the “Northern Triangle” countries of El Salvador, Honduras and Guatemala fleeing gang violence. Cristosal, which has offices in all three countries, operates safe houses there for their protection. However, the ultimate solution is not for private groups to replace the government in this guardian role, Bullock said. Rather, groups like Cristosal achieve long-term structural reforms by “activating” victims to claim their rights, and the state to do its duty. The 1951 Refugee Convention of the United Nations, Bullock said, spells out this duty for whatever country harbors people fleeing persecution.

Bullock described one successful execution of its activation strategy. Cristosal sued the Salvadoran government on behalf of six families forced out of their homes by gang violence, contending that an indifferent government had violated their constitutional rights. In July, the country’s Supreme Court sided with the families, ordering the government to recognize the problem of forced displacement after years of denial, prevent it from happening and aid victims.

David Morales, who directs Cristosal’s strategic litigation team, told the audience of 75 at Washington University of another attempt to hold the powerful of El Salvador accountable for wrongdoing through the courts. Cristosal is privately prosecuting the perpetrators of the El Mozote massacre, in which U.S.-trained government soldiers killed more than 1,000 civilians – more than half of them children – in 1981, the second year of the country’s 12-year civil war. Morales began investigating the massacre during the conflict when he worked in the human rights office of the Roman Catholic Archdiocese of San Salvador, in the nation’s capital. (Morales also sought justice for the 1980 assassination of Archbishop Oscar Romero, a defender of the poor scheduled to be canonized as a Catholic saint on Oct. 14).

The El Mozote case came to a halt when the civil war ended in 1992 with an amnesty agreement that shielded war criminals from prosecution. However, the country’s Supreme Court struck down the amnesty as unconstitutional in 2016. That decision allowed Morales to pick up where he left off years earlier.

Morales said the naked use of violence against civilians during the war has persisted into the present as the Salvadoran police and military take an “iron fist” approach toward gang violence “without investments in policies to prevent crime.” In the process, young people merely suspected of gang membership face imprisonment, torture and extrajudicial execution, he said.

“We think we can challenge the assumption of impunity, the assumption of the powerful that they can do what they like to the weak without any consequences,” Bullock said about the court case. “It’s something we chip away at.”

Other than urging the United States to protect refugees from the Northern Triangle, Bullock and Morales did not address controversial U.S. immigration policies on family separation, temporary protected status or Deferred Action for Childhood Arrivals. Bullock more broadly stressed the importance of the United States, however imperfect, upholding human rights.

“It means a lot to the world when the United States says that human rights matter,” said Bullock. “There’s leverage, then, for organizations like ourselves to advocate.”

“But when the United States abrogates a leadership role, there’s less pressure to leverage those changes,” he said. He noted a resurgence of authoritarianism across the globe and “even in our own country,” which emboldens human rights violators. Case in point: “In Nicaragua, the regime has killed more than 400 protesters in the last few months and kicked the United Nations High Commissioner for Human Rights out of the country with no concern for [international] consequences,” he said.

Bullock also disputed President Donald Trump’s characterization of El Salvador and other developing nations as “shithole countries,” saying that the president ignores U.S. policies that have shaped those countries for the worse over the years. For example, the bullets used by the government soldiers in the El Mozote massacre were made in an army munitions plant in Independence, Missouri, Bullock said.

“We can’t see ourselves in isolation from the conditions that are there,” he said.

A panel of three St. Louis faith-based activists at the symposium related the work of Cristosal in Central America to their own missions. “Faith is personal, but not private – faith has to go public,” said the Rev. Travis Winckler, pastor of Second Presbyterian Church. His congregation, said Winckler, is trying to live out those words by bridging the divide between a predominantly African-American neighborhood immediately to the north that has experienced “the historical residue of racism” and a more affluent, integrated neighborhood next door.

To the Rev. Dietra Wise-Baker, who was active in the protests in Ferguson, Missouri, following the police shooting of Michael Brown, the “iron fist” wielded by the Salvadoran army and police “sounds like the same story, the same song that has happened here, with police in riot gear.”

“How do they understand who we are in their service to us?” said Wise-Baker. “There’s so much resonance between our people and the people of El Salvador.” She added that she had not previously viewed the oppression of African-Americans through a human rights lens.

Wise-Baker, a community organizer with a group called Metropolitan Congregations United, is on the same page with Cristosal when it comes to using the judicial system. In August, her group filed a lawsuit against a local school district along with Missouri educational agencies in federal court for allegedly providing substandard education to homeless children, in violation of federal law. “This is a form of trying to get accountability from the state,” she said.

The panelists also commented on false characterizations or narratives repeated about those deprived of human rights, such as the misconception that undocumented immigrants crossing the southern border are mostly job seekers, or, as Trump has said, “criminals and rapists.”

“We’ve had a history of Jews illegally entering this country,” she said. “In my childhood, so many of the stories we heard were about how people heroically falsified papers, stole papers, did whatever they needed to do to survive.”

– Robert Lowes, an independent journalist and poet, is a member of the Episcopal Church of the Holy Communion in University City, Missouri, a suburb of St. Louis.