[Episcopal News Service] The Radical Vocation Conference at Church of the Incarnation in Dallas Sept. 20-22 drew an international crowd of young adults as well as other interested clergy and laity for three days of reflection on the priesthood. The group was given a unique opportunity to hear from top leaders in the Episcopal Church and Anglican Communion about vocations in the ordained ministry.

Speakers included Archbishop of Canterbury Justin Welby, Bishop N. T. Wright, Stanley Hauerwas, the Rev. Ephraim Radner and the Rev. Oliver O’Donovan. Presiding Bishop Michael Curry and Archbishop Josiah Idowu-Fearon, secretary-general of the Anglican Consultative Council, were also in attendance. The conference, which was sponsored by the Communion Partner Bishops, the Episcopal Diocese of Dallas and Church of the Incarnation, attracted 400 people.

Bishop George Sumner of the Diocese of Dallas welcomed the guests during a solemn evensong service. “We who are longer in the tooth hope this weekend will be a powerful moment of encouragement and discernment for a new generation of leadership in our church,” he said. “Be assured you are daily in our prayers that in the words of St. Paul, ‘you might continue to be ambassadors for Christ, God making his appeal through you – be reconciled to God.’” 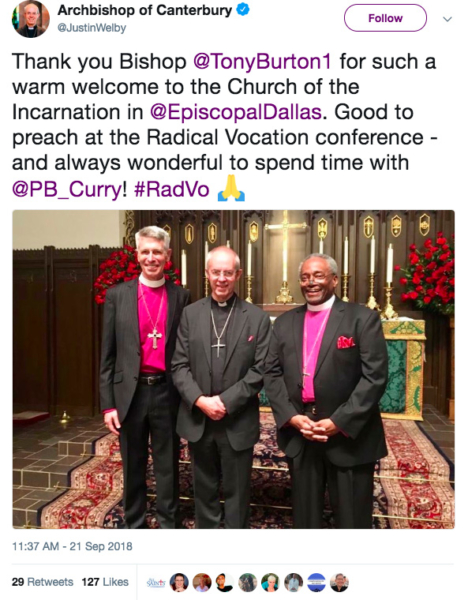 Welby delivered an eloquent sermon creating a mood of prayerful discernment and encouragement when he said that priests are “called to be children of light” to the world. He told the crowd of young discerners that they should be radical, the extremists of love who turn the whole world upside down.

He also spoke about the importance of vocation because of a declining number of faithful in the Western world. Welby said the priesthood is radical “because we follow the revolutionary Christ,” and “confront the darkness at every point which causes trouble.”

Attendees prayed, worshipped, and listened to lectures and panel discussions as they studied how they were being called to serve the kingdom of God. Hauerwas, a professor emeritus of divinity and law at Duke Divinity School, Durham, North Carolina, spoke about the church and pastoral care and how it is not only the work of the ordained. The care that Christians give one another stems from the reality and realization that Jesus is Lord, he said.

A breakout speaker, Elisabeth Kincaid, who teaches moral theology and Christian ethics at Aquinas Institute of Theology, spoke about virtuous leadership and the priesthood. The goal, she said, is to become the kind of person who makes appropriate decisions naturally, and to use reason to determine how to live in the community harmoniously. Virtues needed for this, she said, are temperance, modesty, humility, prudence and courage.

Church of England priest and ethicist Oliver O’Donovan’s humor and frankness during his session were hugely popular. “His lecture on the importance of good preaching was just excellent,” said Ben Davis, an attendee from Kansas.

O’Donovan advised against starting a sermon with a personal anecdote, entertaining story or news item. Instead, the preacher should make the connection between the church and the text of scripture, to search and discover what the congregation needs to hear. He said the scriptural text can be challenging: “[t]he passage you are given from an Epistle may begin with ‘Therefore,’ so be sure to explore the context in which the passage is given.” He noted that it takes about six hours of preparation for a 20-minute sermon. “The scattered contents of your mind need to be cleared away to discover that golden thread God has given you,” he said. “Let the text speak to you as though you have never read it before.”

New Testament scholar and retired Bishop N. T. Wright spoke about the sacramental ministry of the priest, describing it as standing at the fault line between heaven and earth and “knowing the dangerous joy of sacramental life.” Wright was emphatic that one can’t divorce the sacraments or sacramental life from the biblical story. “If you take the symbol out of the story … the whole thing falls apart,” he said. The priest needs to remember with every gesture that “you are playing music written in heaven … and [God] wants his song to be sung well.”

Representatives of seminaries and divinity schools also attended the conference in hopes of attracting students. “People are interested in our Master of Divinity program,” said Barbara Jenkins from Wycliffe College in Toronto. “We also have a lot of students and alumni here, so it’s good to reconnect.” Dallas Theological Seminary let folks know about a new Anglican/Episcopal track, and Oklahoma Christian University set up a table to tell about its online MA in Christianity and Culture. Bishop Jim Mathes from Virginia Theological Seminary said he enjoyed talking to people about their vocations and noted the diversity of attendees. “The mix is, not surprisingly, eclectic when you put the words ‘Radical Vocation’ in the program.”

The conference was a huge success, said the Rev. Jeremy Bergstrom, canon for vocations in the Diocese of Dallas. “I couldn’t be more grateful that work done by our diocese could point so many to Jesus Christ and encourage them to ask the question, ‘Is the priesthood for me?’ Please pray that Christ would use this to persuade many to enter into discernment for the renewal of our church.”

Prior to the conference, Welby and Curry participated in a question-and-answer session at St. Michael and All Angels Church, an event sponsored by the Anglican Centre in Rome. The two were reunited just a few months after serving in the wedding of Prince Harry and Meghan Markle, and joked like old friends; at one point, Curry quipped that he was Welby’s “sidekick.” The two talked about Curry’s sermon at the royal wedding and how it made worldwide news.

“On the way to Windsor Palace the archbishop told me, ‘Don’t hold back,’” Curry said.

“I wanted Michael to get out of the way,” he added. “This was God’s moment. That’s what I prayed for.”

Welby spoke about the Anglican Centre in Rome and said that the Anglican Church and Roman Catholic Church need to work together for the common good. It’s the outpouring of love that brings the churches together, he said. Welby noted that reconciliation is an Anglican strength and spoke about how the lack of a central authority, like a pope, is a blessing for Christian relationships. “We have to come to our agreements [ourselves] and not by someone saying, ‘This is what we are doing.’”

Overall, the three days brought serious thought and discussion about the ordained life. Sumner summed up the Radical Vocation Conference when he told the group, “My hope for each person attending is that you will hear the Gospel afresh, learn more about the apostolic tradition conveying it, of which the Anglican way is a part, and consider anew the call of the ordained and their life in the service of both.”

– Kimberly Durnan is director of communications for the Episcopal Diocese of Dallas.