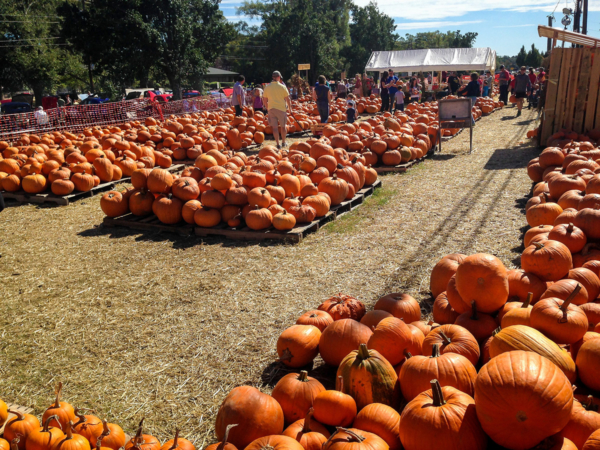 The Holy Cross Pumpkin Patch is open seven days a week throughout October or until the pumpkins sell out. Saturdays and Sundays are the busiest days, and sales always pick up the closer it gets to Halloween. Photo: Randy Cockrill

[Episcopal News Service] If you drive down SE Main Street in Simpsonville, South Carolina, during October you can’t miss the Holy Cross Pumpkin Patch. Piles and piles of pumpkins – thousands of them – in all shapes and sizes are for sale. But these pumpkins do far more than just decorate homes or get turned into jack-o’-lanterns.

It all began 13 years ago, when Holy Cross Episcopal Church faced a budget crisis. The congregation was part of the Golden Strip Church Coalition, an alliance of local churches that had agreed to combine their time, talent and treasure annually to build one house for Habitat for Humanity. But with the church’s budget stretched thin, it appeared Holy Cross would fall short of its financial commitment to the coalition.

A small committee met to discuss the problem. Folks were feeling pretty low. Where could they possibly get the dollars needed?

That’s when Ennis Whiddon piped up. “I’ve got this idea. How about we sell pumpkins?” he said.

Whiddon went on to explain how selling $6,000 worth of pumpkins would result in $1,000 profit to go toward the Habitat build. 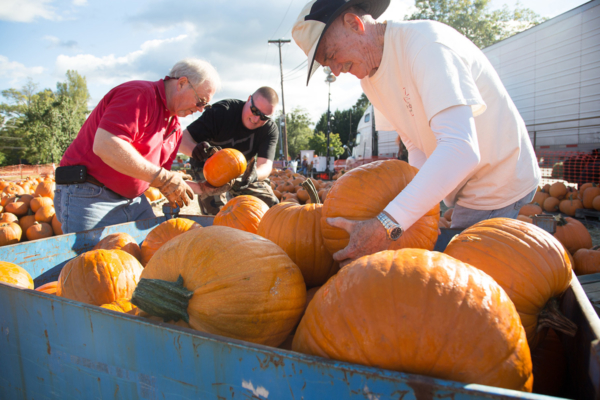 It’s all hands on deck when a tractor trailer shipment of 3,000 pumpkins and gourds arrives. Photo: Randy Cockrill

The room grew quiet. People shuffled in their seats. The idea of selling thousands of dollars worth of pumpkins sounded a little crazy.

Whiddon pressed on. He explained that Holy Cross could order pumpkins from Pumpkin Patch Fundraisers, which ran a farm in Farmington, New Mexico. The pumpkins would be trucked to Simpsonville in a semi.

“If we don’t sell them, we owe nothing,” Whiddon explained.

“Ennis had a get-it-done attitude,” recalls the Rev. Michael Flanagan, rector of Holy Cross. “He was kind of like a dog with a bone. When he got an idea, he didn’t let go of it easily.”

With no money down and no contract to sign, the idea seemed too good to be true. Ennis urged Holy Cross to take a leap of faith. The Vaughn family, members of the church and owners of Vaughn’s Country Store, provided a prime location in the heart of Simpsonville, thus assuring the sale good visibility. The church ordered one quarter of a tractor trailer load of pumpkins and gourds to be delivered at the start of October.

When the pumpkins arrived and folks saw just how high those pumpkins piled, many a parishioner began praying that they would manage to sell them all sell by month’s end. Their apprehensions were soon allayed. The first shipment sold out so quickly that another semi was dispatched to deliver more.

In one month, Holy Cross sold $17,000 worth of pumpkins, gourds and ornamental corn. In doing so, they raised $5,500 for Habitat for Humanity. The Holy Cross Pumpkin Patch became an annual event. 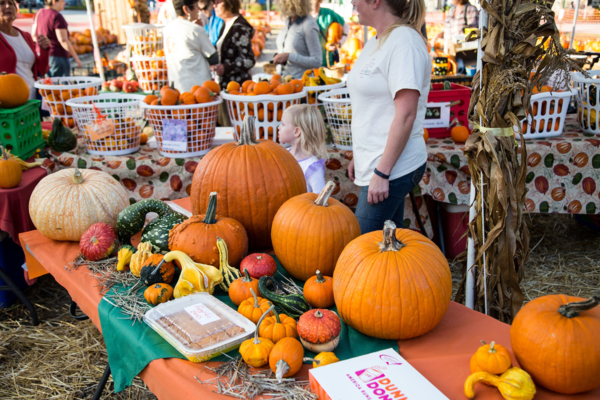 The Holy Cross Pumpkin Patch offers the best assortment of pumpkins and gourds in the Simpsonville area. Their prices aren’t the lowest, but 100 percent of profits are donated to area charities. Donations last year totaled $26,325.

The first 2018 organizing meeting took place in May. A second was held late in August, but by then, some behind-the-scenes work had already begun. Promotion within the church and volunteer sign-up started right after Labor Day. Actual setup begins the weekend before opening day.

Early in the morning on October 6, the first semi full of pumpkins will be unloaded by volunteers from Holy Cross. The patch will open for business later that morning and the fun will begin.

To staff the patch seven days a week for 26 days, volunteers must cover 248 two-hour shifts. These shifts are covered primarily by folks from Holy Cross, a congregation of 500 adult members. Volunteers from other churches and community organizations also pitch in. In addition, daily opening and closing work is required.

To receive this year’s total order of 9,000 pumpkins, two additional tractor trailers will arrive at later dates. These will be unloaded by volunteers from some of the charities the Holy Cross Pumpkin Patch helps to support.

Pumpkin Patch Fundraisers grows the pumpkins in cooperation with the Navajo Nation. The 1,200 acre farm employs more than 700 Native Americans during September and October, as well as a full-time off-season staff comprised entirely of Native Americans. In a region where unemployment exceeds 40 percent, jobs at this farm are highly prized. 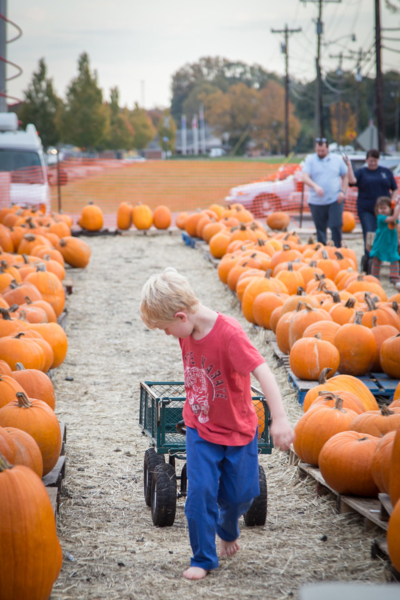 Carts make shopping easy for all ages, and all ages love the pumpkin patch. Many people return year after year. Photo: Randy Cockrill

What the patch gives

“Our charter dictates that 100 percent of our proceeds must be donated to 501(c)(3) nonprofits that support people in our own area of upstate South Carolina,” says Randy Cockrill, who has served as Holy Cross’ lead pumpkin patch organizer for the past six years.

“The pumpkin patch enables our congregation to make a big positive impact,” he said. “This year, we’ll be giving funds to Habitat for Humanity, as well as seven other ministry partners.”

In 12 years’ time, Holy Cross has donated $239,666 to charities that provide food, shelter, clothing, adult ESL classes, employment services and more to neighbors in need – all thanks to the pumpkin patch.

The church invites each ministry partner to make a presentation at Holy Cross. Plus, each partner is visited by a member of the church during the course of the year.

“In 2017, we helped to support 10 ministry partners,” says Cockrill. “This year we selected just eight so that we can provide more significant amounts to each one.”

Local animal shelters also benefit. Soft or damaged pumpkins are culled from the patch and donated to them to help feed the animals in their care.

Members of Holy Cross and others who volunteer at the patch develop connections that continue long after the last pumpkin is sold each year.

Ennis Whiddon, who died in 2015, had foreseen the pumpkin patch as a fundraiser and a community builder. What the patch has grown to be, however, exceeds his vision.

Through their work together, the members of Holy Cross achieve something they would be unable to achieve individually.

You might say they turn piles of pumpkins into gold for their community.