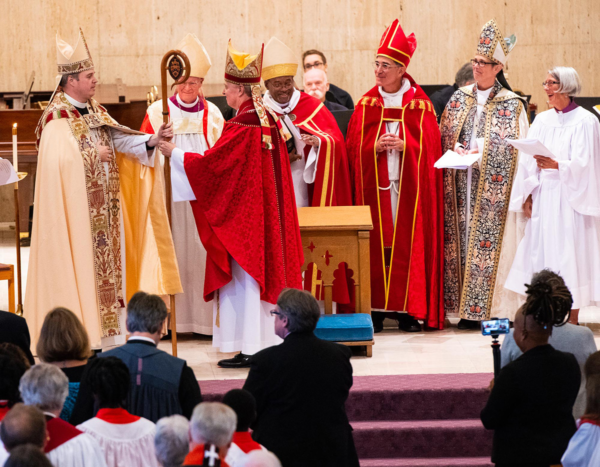 Kevin D. Nichols, newly ordained and consecrated ninth bishop of the Diocese of Bethlehem, Pennsylvania, receives the crozier from Sean W. Rowe, who has served as bishop provisional since March 2014. Photo: Danny Schweers

[Episcopal News Service] The Rt. Rev. Kevin D. Nichols was ordained and consecrated as the ninth bishop of the Diocese of Bethlehem on Saturday, Sept. 15, at the First Presbyterian Church of Allentown, Pennsylvania.

Nearly 600 people attended the festive consecration service, at which the Rt. Rev. A. Robert Hirschfeld, bishop of New Hampshire, preached. The presiding bishop of the Episcopal Church, the Most Rev. Michael B. Curry, led the service as chief consecrator.

Nichols will be seated at the Cathedral Church of the Nativity on October 12 during the diocese’s annual convention.

During the ordination service, Nichols was presented with a pectoral cross designed by Curtis Drestch, a professor at Muhlenberg College. The cross, a symbol of the bishop’s office, is made of stainless steel in recognition of the region’s history as a center of coal mining and steel manufacturing. 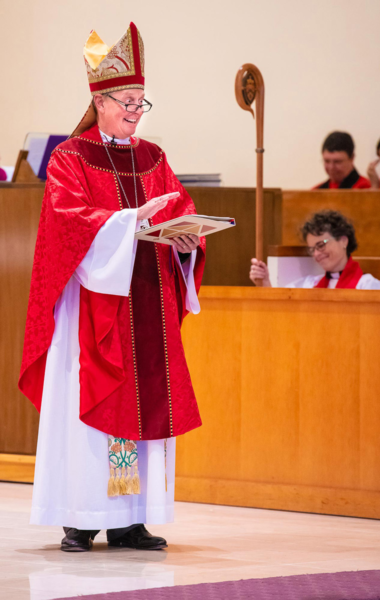 The Rt. Rev. Kevin D. Nichols was ordained and consecrated as the ninth bishop of the Diocese of Bethlehem on Saturday, Sept. 15. Photo: Danny Schweers

Nichols was elected bishop on April 28. Prior to his election, he was chief operating officer and canon for mission resources in the Diocese of New Hampshire, a position he held since 2014. Nichols was formerly president of the Diocese of New Hampshire’s Standing Committee and a member of the churchwide Task Force to Reimagine the Episcopal Church.

A former Roman Catholic priest who received his master of divinity degree from St. Mary’s Seminary and University in Baltimore, he was received into the Episcopal priesthood in 1999 and has served as rector of St. Stephen’s in Pittsfield, New Hampshire, and St. Andrew’s in Hopkinton, New Hampshire. He is married to Patti, a licensed clinical social worker. They have four adult children: Graham, Lindsay, Bryan and Keaton, and three grandchildren.

Nichols succeeds the Rt. Rev. Sean W. Rowe, who has served as bishop provisional since March 2014.

The Diocese of Bethlehem includes more than 9,000 Episcopalians in 58 congregations across northeastern and central eastern Pennsylvania.