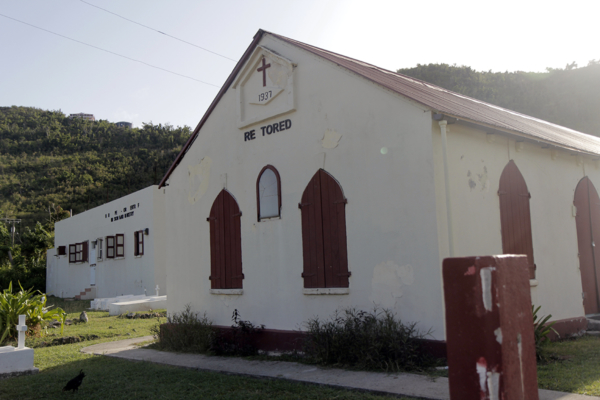 St. Paul’s Episcopal Mission is located on Tortola, British Virgin Islands, in Sea Cow’s Bay, named for the manatees that used to swim in its waters. The church building was destroyed in a hurricane in 1916 and rebuilt in 1937. In 2017, Hurricane Irma blew in the doors, and a pew landed on and destroyed the organ. The congregation worshipped in the parish hall until the first Sunday of Advent last year. Photo: Lynette Wilson/Episcopal News Service

[Episcopal News Service – Tortola, Virgin Islands] St. Paul’s Mission parishioners pray by name for the children who went off island to attend school in the aftermath of two hurricanes that devastated the Virgin Islands last September. A year later, many of them haven’t returned.

Right after the storm, Huberta Hamlet, her sister, and their families were airlifted off Tortola by her sister’s company. When Hamlet, St. Paul’s junior warden, called the mission’s vicar, the Rev. Sandra Malone, to explain that they and their children were going away, Malone sat on her bed and cried.

Of the church’s 12 children, a small but active group, two have returned.

“I think that impacted the church a lot,” said Malone, even more so given that parishioners had no opportunity to say goodbye or to offer a proper send-off to one family that moved permanently to another island.

Most of St. Paul’s parishioners are related, and children breathe life into the community. St. Paul’s, like most Episcopal churches, serves an older population. Children leaving to study abroad is a reality of island life, but it’s usually delayed until college. Irma and Maria changed that.

Angelica Pini, 15, a secondary student at St. George’s Episcopal School on Tortola, was sent to live with relatives in Forli, Italy. She didn’t have contact with her friends back on the island.

“It hurt me. I missed my family and friends,” she said.

At first, adjusting to the education system in Italy was difficult, and at the time, even though she spoke Italian (her father is Italian), she didn’t read or write the language. But the worst part, she said, was when she arrived at her aunt’s house, the vibration from a nearby train station gave her flashbacks to the tremors she felt during the hurricane.

“I woke up at 12 a.m. and thought this is another hurricane,” said Pini. “I thought, I have to tell my aunt because if I stay here every night, I’m going to be traumatized.”

Many of Pini’s classmates from St. George’s left Tortola too, at least in the hurricanes’ immediate aftermath.

Eleventh grader Aniyah Wilkinson, 15, and her family evacuated to Puerto Rico after Irma, only to get caught in Hurricane Maria’s path 16 days later.

“It was horrible, people were scavenging for food and water,” she said.

On Wednesday, Sept. 6, 2017, Hurricane Irma ripped through the Virgin Islands as a Category 5 storm, stripping the islands of vegetation and damaging or destroying the majority of homes and buildings. 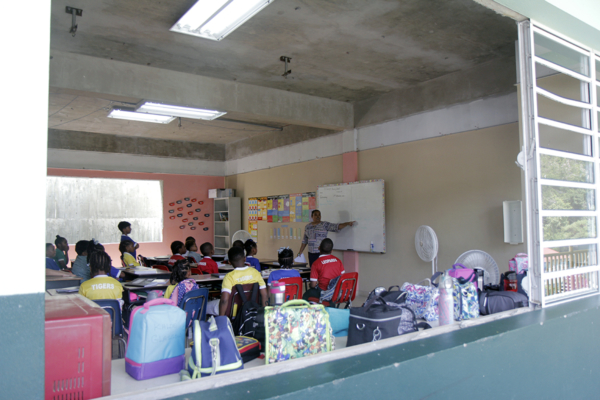 The classrooms at St. George’s Primary School on Tortola remain damaged, which is starting to get on parents’ nerves, said Cherilyn Anderson, the school’s principal.

Both St. George’s secondary and primary schools suffered significant damage and remained closed until October 2017. Both schools were chosen to participate in a UNICEF program designed to help children process stress and trauma following a disaster.

The school held group therapy and art therapy workshops to help students process their memories and emotions. UNICEF also trained teachers in how to identify trauma.

Early this September, as the Atlantic hurricane season was approaching its peak and three storms had formed off Africa’s west coast, students were on edge.

“What I’m hearing now is that some are thinking that the same thing is going to happen,” said Odalys Gonzalez, a Spanish teacher.

St. George’s Primary School reopened on Oct. 2, 2017 with 126 students, down from 216 before the storm. Many of the students went abroad, but they’ve returned this year and enrollment has reached 238, as St. George is also enrolling students from other schools, said Cherilyn Anderson, the school’s principal.

The primary school introduced its own coping program, SMILE, which stands for Share, Manage, Interact, Love and Embrace, devoting the last 30 minutes of each day to helping students cope with life after the hurricanes. It also uses the UNICEF curriculum.

“Coming from St. Lucia, I’ve seen lots of floods and hurricanes, and I know students need to cope,” said Anderson. “I just knew they would need something because, as an adult, I was feeling that I had to cope.”

Irma was the first hurricane many of the students had ever experienced. 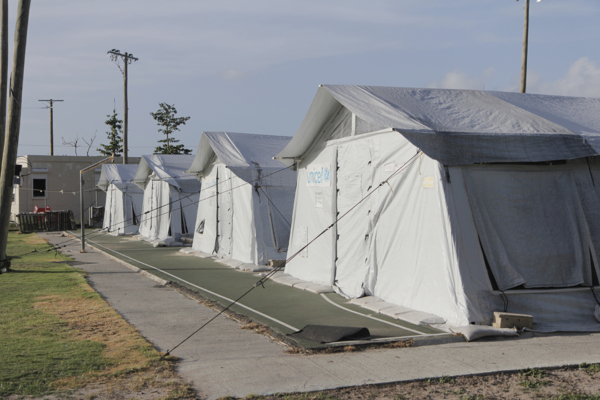 “They couldn’t stop talking … who had to go into the refrigerator, who had to hide in the cupboard,” she said. “You’re kind of happy they are children because they don’t make so much of it … living with others, living without electricity and water.

“Their first sense of normalcy was returning to school, and they were happy to be here.”

After the hurricanes, Anderson and the school’s teachers began clearing debris from the school, which suffered serious damage. Many of the teachers came to help clean the school even before they cleaned their own homes.

“That’s why we were one of the first schools to open,” she said.

When school started, Anderson brought in an iron, so teachers could iron their clothes, which they’d had to hand wash and wring out. At home, she cut the cord off an old iron and warmed it on the stove. The school had power three weeks after the storm, but Anderson didn’t get power at home until February. Each night she’d read herself to sleep with a flashlight balanced on her shoulder. 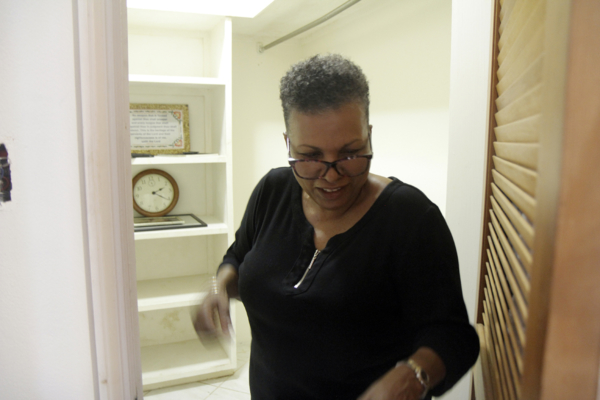 St. Paul’s Mission and St. George’s Anglican Church are the two Episcopal-Anglican churches on Tortola, which is part of the Episcopal Diocese of the Virgin Islands. The diocese covers five islands, which are connected by ferries and small planes. Three of the islands – St. Thomas, St. John and St. Croix, are U.S. territories. Tortola and Virgin Gorda are British territories. A hurricane in 1916 destroyed St. Paul’s. The Rev. Ralph Perry-Gore, who is buried in the parish cemetery, restored it in 1937.

Tortola is the largest of the British Virgin Islands. Its hills, where the people live, are steep. In the 27 years that Malone, St. Paul’s vicar, has lived there, she’s witnessed the temperature rise. It’s generally hotter, she said, and it’s harder to identify the rainy season. Those changes she attributes to climate change.

“The seasons are shifting and not so easily identifiable,” she said. “We live pretty close to the ground and can see what’s happening. At the sea, you can see the erosion and the coral dying. When you live it, it’s hard to deny it.”

Malone, her husband, Meade, and their 16-year-old son, Timothy, spent five or six hours riding out Hurricane Irma in a third-floor walk-in closet, with Meade holding the door closed as the wind continually threatened to open it.

Most of St. Paul’s parishioners tell similar stories of sheltering in bathrooms and closets for hours and struggling to hold doors shut. Felicito Moses and a friend sheltered in a closet while two feet of water rose around them. 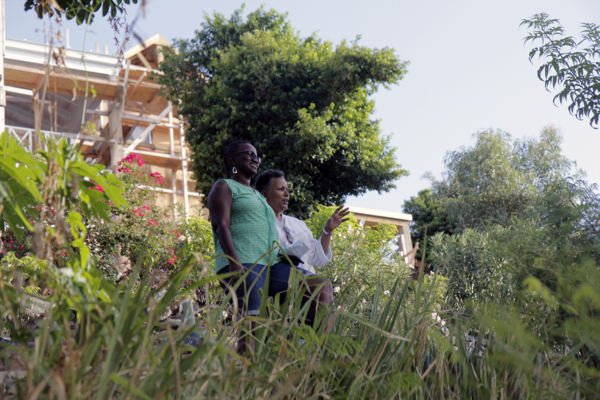 Parishioner Judith Charles sheltered from the storm in her cousin’s house; her own house was completely destroyed. As Irma approached, she watched the wind whip the water left and right. When the storm passed and she saw her home “ripped to shreds,” she didn’t cry a tear.

“It was done. What could I do … in the aftermath? It was like an apocalypse,” Charles said. “It looked like Beirut, bombed out; people looked bombed out and sad.”

At times, said Malone, winds gusted up to 235 mph. “How do you prepare for something like that? The only thing you can do is what you know.” Irma was a different kind of hurricane that also brought tornadoes. “Reports say it measured on the seismic scale,” she said.

Standing in long lines for hours under the hot sun for food and water that may run out before they get to the front of the line, the lack of construction materials, and a shortage of craftsmen to make repairs exacerbated an already bad situation. “It’s dehumanizing,” said Beryl Smith, president of St. Paul’s Episcopal Church Women.

This year, for some whose homes have been repaired, the tropical rains from an Aug. 30 storm increased anxiety. “A lot of people found the work was not done right,” Smith said.

In Irma’s aftermath, St. Paul’s became a supply distribution center and later served as an immunization clinic. The congregation received help from companion parishes in the Diocese of Alabama, and the mission continues to serve the community, providing food and schools supplies to families in need. 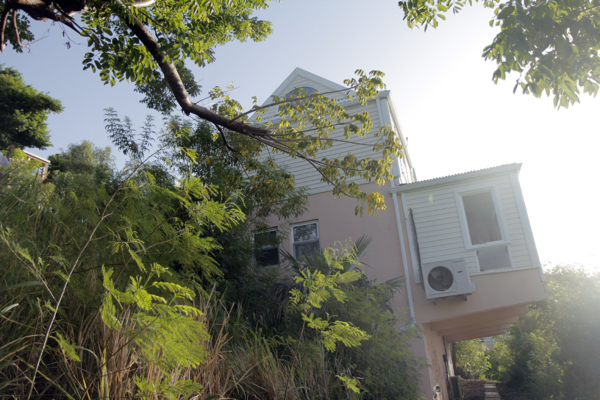 A parishioner gifted St. Paul’s a vicarage, an apartment in Long Bay, which the congregation had used as a retreat center but recently planned to rent as an income-generating property. Irma, however, destroyed its interior, and the apartment requires a complete renovation. Photo: Lynette Wilson/Episcopal News Service

The congregation moved back into the church on the first Sunday of Advent last year. On the first anniversary of Irma, Malone brought in a psychologist to talk to the community and performed a litany of remembrance.

On the Sunday after the storm, Malone made her way to the church, which is on Sea Cow’s Bay, named for the manatees that used to swim in its waters. With the devastation, it took her some time to find her way because nothing looked the same.

When Malone arrived at the church, she found Beverly Hodge Smith, then senior warden, already there cleaning the parish hall, and Malone began to help. Then, they got word to Realdis Todman, who’d been there earlier in the day. Together, they carried the altar out of the church, set it up in the parish hall and held services.

From there, “everyone just helped each other out,” Malone said.