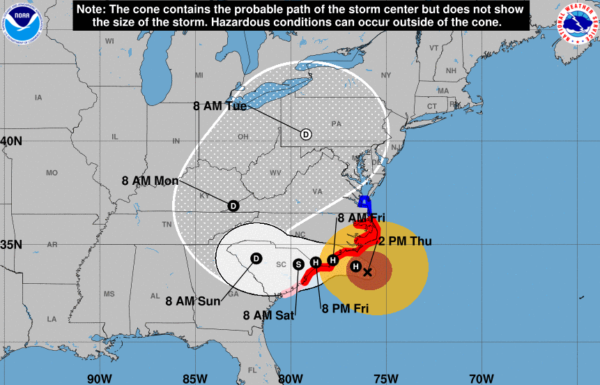 [Episcopal News Service] Episcopal dioceses and congregations along the Carolina coast and further inland are offering guidance, resources and prayers to Episcopalians in the line of Hurricane Florence, which is expected to make landfall late Sept. 13 or early Sept. 14 and bring destructive winds, waves and rain.

The eye of Florence is on track to pass over or near Wilmington, North Carolina, with hurricane-force sustained winds before making its way across South Carolina and weakening over the next few days, according to the National Hurricane Center forecast. Authorities warn the worst damage could be from storm surge on the coast and steady rain, which have the potential to cause dangerous flooding.

“Hurricane Florence is an uninvited guest, but she is just about here anyway,” Gov. Roy Cooper said Thursday morning, according to the Wilmington Star News. “My message today: Don’t relax. Don’t become complacent. This is a powerful storm that can kill. Today, the threat becomes a reality.”

Episcopalians are taking that threat seriously. Services and church activities have been canceled from the Episcopal Church in Okatie, South Carolina, near the Georgia state line to St. Timothy’s Episcopal Church in Greenville, North Carolina. Diocesan officials have been in contact with Episcopal Relief & Development and are communicating emergency info to their church members. And many Episcopalians on the coast have heeded evacuation orders or else are hunkering down as the storm approaches.

“There seems little doubt that Hurricane Florence is going to have a tremendous impact across the communities of our diocese, and many are projecting that it will be the most devastating storm that our state has experienced in decades,” East Carolina Bishop Robert Skirving said Sept. 12 in a letter to the diocese, which includes coastal North Carolina.

His diocese has created a “hurricane hub” on its website to provide residents with the latest storm updates and links to other information and resources. The website also invites those interested in helping to donate to the diocese’s relief fund or to Episcopal Relief & Development.

The National Hurricane Center warns that Florence is poised to bring “life-threatening storm surge and rainfall.” The storm’s wind speed has decreased in recent days, but it has grown wider and is expected to produce storm surges of up to 13 feet and up to 30 inches of rain for coastal North Carolina and northeastern South Carolina. Up to a foot of rain could fall on the rest of the Carolinas and Virginia.

The Church of the Servant in Wilmington isn’t taking any chances.

“Thank you to those who were able to come help us get COS ready for hurricane Florence,” the congregation’s rector, the Rev. Jody Greenwood, said Sept. 13 in a Facebook post showing a virtually empty church. “Consider hatches battened-down.”

When reached by phone, Greenwood told Episcopal News Service she and her wife left their home in downtown Wilmington to stay with other members of the congregation in a home more securely located away from the ocean. She brought her bicycle, to have another way to get back to the church if driving lanes aren’t passable after the storm.

The parish, with an average Sunday attendance of about 150, has an emergency plan that involves checking on each parishioner before the storm hits. Greenwood estimates half of them fled, and the other half are staying in Wilmington.

She hopes to let them know in the next day or so whether Sunday services will resume on Sept. 16. The services necessarily would be simple. No bulletins were printed before the storm. The congregation’s organist is staying in Alabama.

“If we have services, it’s going to be mostly to give people something to do and be in community with each other,” Greenwood said.

Across the city, fellow Wilmington congregation St. Andrew’s On-the-Sound Episcopal Church had closed as well, with all but its 11:15 a.m. Sunday service canceled for the week.

“Please, as always, pay attention to bulletins and warnings from local government,” the Rev. Richard Elliott, rector, said on the church’s Facebook page. “Err on the side of caution. Exercise common sense. If you are in a safe place and it is not safe on the roads, stay in the safe place. We will have church services another time. … Let us hold one another close in our hearts.”

Grace Cathedral in Charleston, South Carolina, noted it was under a mandatory evacuation and had canceled many of the congregation’s regularly scheduled activities for the week, though Sunday services are still on for now.

“We pray for our community, for all travelers, and all those affected by this coming storm,” the cathedral said in a post about the storm on its website. “We pray for the safety and security of all. We ask for God’s guiding Hand upon all first responders and all agencies that provide relief in the days ahead.”

The Episcopal Church in South Carolina, which includes Charleston and the state’s coastal congregations, has been working with Episcopal Relief & Development since Sept. 10 to plan for the storm, according to a post on its website. Sunday services are canceled for at least 12 congregations in the diocese.

Episcopal Relief & Development is supporting 11 dioceses in the path of the storm, which has prompted evacuation orders affecting more than 1.5 million people.

“Leaders throughout this region have extensive experience preparing for and responding to disasters and have powerful networks of relationships and ministries in their communities,” Katie Mears, senior director of Episcopal Relief & Development’s U.S. Disaster Program, said in a press release. “This wealth of experience and deep community connections will allow diocesan leaders to effectively serve those most in need.”

And although the communities along the Carolina coast are expected to be hit hardest by Hurricane Florence, churches further inland are taking the storm just as seriously.

Western North Carolina Bishop José McLoughlin sent a letter to his diocese Sept. 12 noting that he and the rest of the Carolinas and Virginia bishops have been on daily conference calls to coordinate church response, including through use of an emergency alert system.

“We are doing everything in our power to ensure that we all stay connected during the upcoming natural disaster,” McLoughlin said. “Please keep the other dioceses that are in the path of Hurricane Florence, as well as all first responders, in your prayers.”

The Diocese of North Carolina, which encompasses the middle third of the state, issued a notice Sept. 13 saying diocesan offices would be closed for the day and on Sept. 14. It also offered assistance for congregations that sustain damage to their churches and to clergy needing pastoral support.

Episcopal leaders in the region have been busy all week with preparations, North Carolina Bishop Suffragan Anne Hodges-Copple told Episcopal News Service by phone. By Sept. 13, with plans in place, it felt like the “calm before the storm,” she said, but behind the scenes communications continue among all affected dioceses.

“There is a huge collaboration going on,” Hodges-Copple said.

The Episcopal Church is familiar with this kind of response because of the expertise provided by Episcopal Relief & Response but also because of the frequency of similar disasters in recent years. 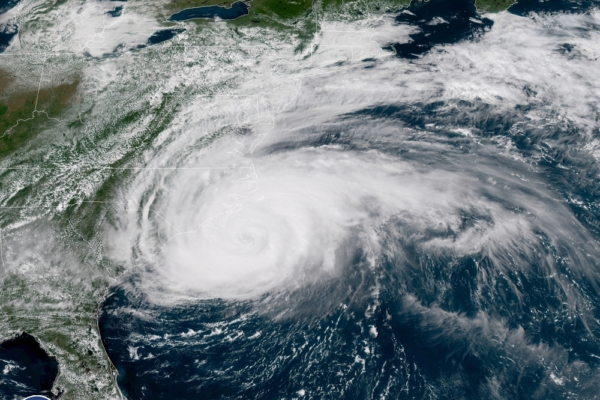 The eye of Florence is on track to pass over or near Wilmington, North Carolina, with hurricane-force sustained winds before making its way across South Carolina and weakening over the next few days, according to the National Hurricane Center forecast. Photo: NOAA

This month marks a year since Hurricane Harvey hit Texas and Louisiana hard, prompting the mobilization of the dioceses there to help with relief efforts. Later in September 2017, Hurricanes Irma and Maria devastated much of Puerto Rico and the Virgin Islands, and the Episcopal dioceses there still are working with residents to bounce back. Irma also hit the mainland United States, and Episcopal dioceses from Southwest Florida to South Carolina helped their congregations prepare for the storm and deal with the aftermath.

Hodges-Copple referenced storms from even farther back – Hurricane Hugo in 1989 and Hurricane Fran in 1996 – that hit the East Coast, including the Carolinas. Not everyone in her diocese today may remember those storms, but emergency communications have improved since then as technology has evolved. Even in remote, rural areas, the church is working to make sure no residents are forgotten during and after a major storm like Florence.

And often, the most immediate relief priests and deacons can offer their parishioners is a calming presence in the face of calamity.

“There’s going to be times when all we can do is be still and be prayerful,” she said.