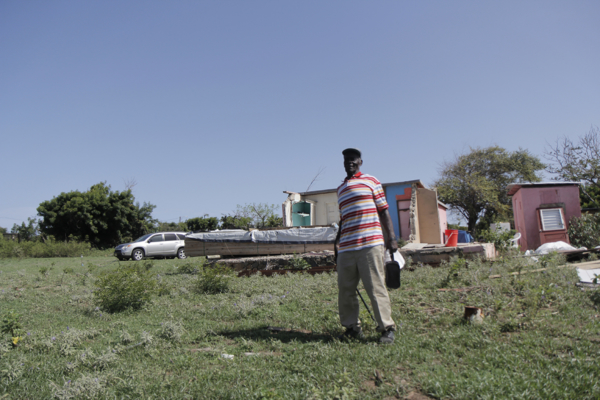 [Episcopal News Service – Virgin Gorda, Virgin Islands] Last year’s back-to-back hurricanes hit Virgin Gorda’s elderly population particularly hard. Many of them had worked and saved their entire lives to build homes that were destroyed in a day. In the 2017 storm season’s aftermath, 14 seniors perished. Some died from existing conditions made worse by the storm; others succumbed to despair and broken hearts.

“The seniors got hit the hardest,” said Denise Reovan, who serves on St. Mary the Virgin Episcopal Church’s vestry and as dean of the Virgin Island deanery, which includes St. Mary’s, as well as St. George’s and St. Paul’s on Tortola. The islands of Virgin Gorda and Tortola are part of the British Overseas Territory officially known as the Virgin Islands, but also referred to as the British Virgin Islands.

“There, seniors who have spent their lives building 10-by-8-foot homes; for some it’s all they have and have lived for … and to wake up one day and it’s gone,” she said. 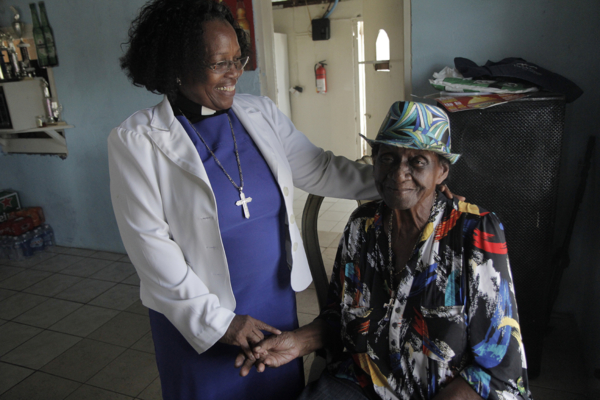 The Rev. Eriminie George, St. Mary’s supply priest, visits with Ovilda Stevens, 92. Every day, Stevens sits in the same chair next to the window in her family’s café, lamenting the loss of her home. Photo: Lynette Wilson/Episcopal News Service

Gladstone Walters, 86, is one such senior. His home, near the ferry terminal on Virgin Gorda, was severely damaged. After living next door with a family member, Walters eventually moved back into his own home, despite the damage. Like many others whose homes were either uninsured or underinsured, he has little money available to make repairs.

During a recent lunchtime meeting at St. Mary’s on Church Hill Road in South Valley, Walters sat silent, his head hung low, listening to the others who’d gathered – many of whom have worshipped together for generations. They shared their stories of survival during Hurricanes Irma and Maria. The hurricanes struck the island last September within 16 days of each other, damaging more than 95 percent of the island’s structures and stripping it of vegetation.

“Thank you for sparing life, we give you thanks, have mercy on us, spare us,” Walters mumbled. “God is love. Thank you for the spared life.” 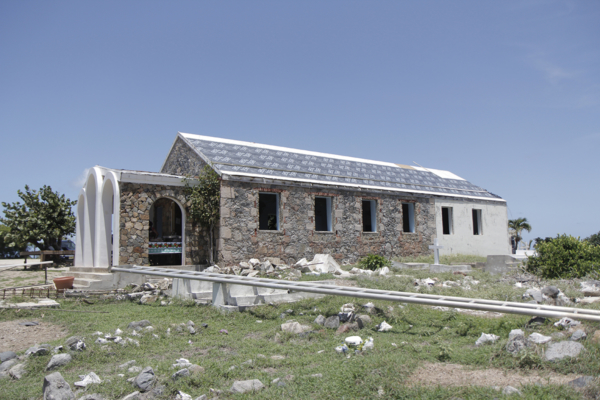 St. Mary the Virgin, the only Episcopal church on Virgin Gorda, lost all of its windows during Hurricane Irma. The congregation didn’t move back into the church until July. Photo: Lynette Wilson/Episcopal News Service

On Wednesday, Sept. 6, 2017, Irma terrorized Virgin Gorda residents for eight hours. From 9 a.m. to 5 p.m., otherwise stationary objects were flying through the air as the Category 5 hurricane’s at-times 250 mph winds ripped through the island.

“When Irma came, she was coming in this direction,” said Vanessa Rymer, senior warden, gesturing east. “She headed northeast and came right down on us and then kept changing her coordinates.”

The 135-year-old church, situated on 3.5 acres overlooking the Atlantic Ocean, lost its windows. The roof was damaged when the winds blew off the shingles, the bell towers collapsed to the ground, the organ was destroyed, the church’s pavilion was totaled, and the rectory was damaged. An addition to the original structure that housed a music school crumbled. Land leased to the government for agriculture remains unplanted. The list goes on. 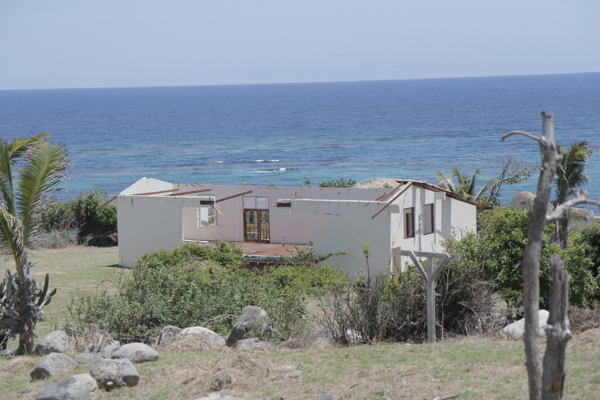 St. Mary’s pavilion, which overlooks the sea, was used by the community for jazz concerts, theatrical performances and other cultural events. Photo: Lynette Wilson/Episcopal News Service

Part of the Diocese of the Virgin Islands, which covers five islands and includes both the U.S. and British Overseas territories, Virgin Gorda is home to St. Mary the Virgin, the only Episcopal-Anglican church on the island. All told, Hurricanes Irma and Maria caused over $102 billion in damages, $7 million alone in damages to church properties. 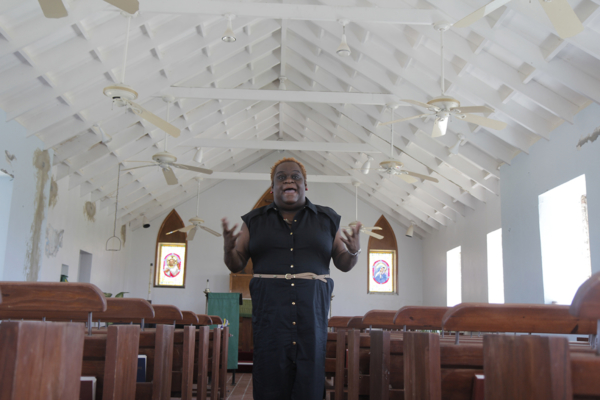 St. Mary the Virgin Episcopal Church members consider themselves “Anglican” given the British influence. They became Episcopalians when in the 1990s the churches on Virgin Gorda and Tortola became part of the Diocese of the Virgin Islands, a geographically based decision, they say.

Around 4,000 people from all over the Caribbean – St. Kitts, Anguilla – and expats from the United States and United Kingdom live on the 8-square-mile volcanic island discovered by Christopher Columbus in 1893. Columbus named the island Virgin Gorda because it looked like a “pregnant virgin,” locals say. 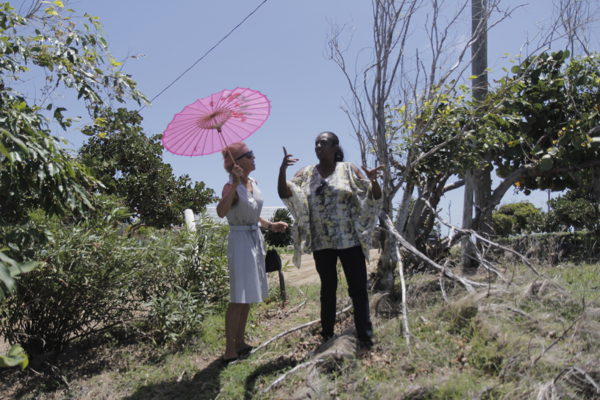 Longtime St. Mary the Virgin parishioner Chandra Carr, left, and Denise Reovan, who serves on the vestry, talk about the church’s plans to plant a garden on property that before the storm was leased to the government. Photo: Lynette Wilson/Episcopal News Service

Still today, an uneasiness pervades on the island, which even in good times can seem isolated. Shortages of building materials and craftsmen mean residents are still living in damaged homes. Of the laborers working on the island, many are employed by contractors building a luxury resort or repairing the part-time residences of wealthy expats. One ATM, but no bank, serves the entire island. Residents who do not have direct deposit must take a 30-minute ferry ride to Tortola to cash a check.

To watch the laborers commuting in buses to work on the resort and vacation villas “is demoralizing for all of us,” said Chandra Carr, a lifelong St. Mary the Virgin parishioner who bought her own property on the island in 1985.

Joy Defreitas, a Sunday school teacher, further explained that the contractors hire the workers for the resort and the villas. They can work for residents in the afternoon and on the weekends.

“Some are available, some are not,” Defreitas said. “When you work on a contract, you don’t have much time left over.”

The challenges to residents across the Virgin Islands remain the same.

“What we knew as normalcy will never happen again,” Reovan said of a situation made worse by the distance between churches and between islands.

“Isolation is a normal situation. When Bishop Curry visited in January, he took the time to hear from people in each church,” said Reovan. She explained that the presiding bishop told them, “‘You’re not alone, believe me, you are not alone.’ He didn’t say, ‘Help is on its way,’ but it came.”

Following Presiding Bishop Michael Curry’s January 2018 visit to the Virgin Islands, Episcopal Relief & Development stepped up and along with the Diocese of Alabama initiated a small grants program. 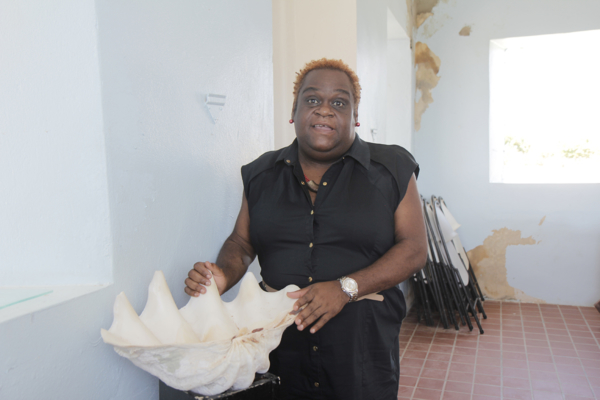 St. Mary’s is using funds from a mini-grant program to create “Lunch for a Bunch,” a program to feed the island’s senior citizens.

“You don’t have to be Anglican or Episcopalian, you just have to be a human in need,” said Reovan.

“We have parishioners – we are a proud set of people, proud and independent – people who don’t have a meal and they won’t ask, and you’ll see them out and buying food and they can’t afford it.”

St. Mary’s hasn’t had a regular full-time priest for eight years. A priest working a six-month stint has been the norm, which has affected church membership and growth, a situation exacerbated by the storms.

Under the leadership of the Rev. Eriminie George, a supply priest who travels from Tortola to Virgin Gorda on Sundays and some Wednesdays, the church continues to serve the community.

“As clergy we’re not doing enough. I should be looking out for the people’s needs. We are part of the Episcopal Church. There are people who’ve been giving their pittance to the church, and we’ve come to that point where we need to meet their needs,” said George. “There are seniors who worked so hard and built their homes. … Where is the church now to pick up the shreds? We need to meet the needs of the individuals first and foremost.”