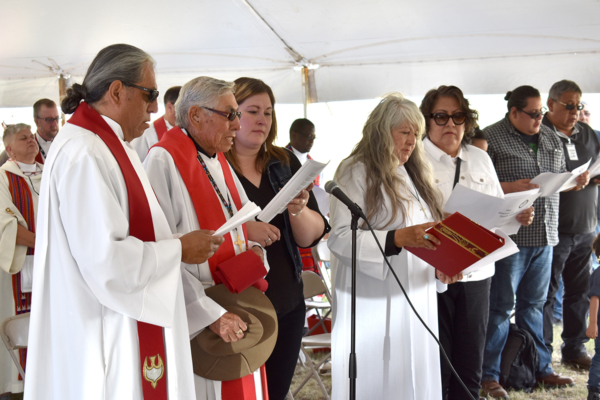 The Rev. Robert Two Bulls Sr., second from left, leads the Prayers of the People on June 24, 2017, at the ordination of his daughter, Twilla Ramona Two Bulls, as deacon during the 145th Niobrara Convocation at Red Shirt Table, South Dakota. Photo: David Paulsen/Episcopal News Service

[Episcopal News Service] The Episcopal Church is expanding its investment in translations of the Book of Common Prayer into indigenous languages, with the Diocese of South Dakota receiving a United Thank Offering, or UTO, grant to pay for a new Lakota translation.

That grant comes a year after a similar grant was awarded to the Diocese of Alaska in support of a translation of the prayer book into Gwich’in, the language of many Native Alaskans, and future translations may include the prayer book used by Navajo Episcopalians.

“Language is important. Without it, you can’t really understand or appreciate the culture of the people,” said the Rev. Bradley S. Hauff, Episcopal Church missioner for indigenous ministries. “And a big part of the [indigenous] culture is spirituality, and just knowing the language really opens up doors for understanding that English does not.”

The nine tribes in the Diocese of South Dakota rely on a partial translation of the 1928 Book of Common Prayer that is known as the Niobrara Service Book. The language is comprehensible but archaic, said the Ven. Paul Sneve, the diocese’s archdeacon, who is overseeing the translation process.

“I always tell people, if you can imagine the difference between speaking King James English and speaking English on the street, they’re a little different,” Sneve said.

There are other linguistic challenges as well, such as the Lakota language’s lack of gender pronouns. References to God as male are difficult to translate. “It actually makes it kind of awkward. We don’t talk that way,” Sneve said.

The $45,000 received from the UTO program will allow Sneve to assemble a team of elders and other fluent Lakota speakers, who will meet and discuss the linguistic, theological and cultural factors in producing a full Lakota translation based on the 1979 prayer book. But Sneve also hopes to go beyond the prayer book and develop additional liturgical resources based on the needs of congregations and communities in the diocese.

The rate of youth suicide and overdose is high among Native people in South Dakota, so one goal is to develop a funeral liturgy that can be adapted for burying a child. Home blessings and blessing of tombstones are part of some tribal cultures, so Sneve hopes this project will accommodate those as well.

Some parts of the prayer book, including baptismal rites and Rite II’s Eucharistic prayer A, already have been translated into modern Lakota, which can be understood by all nine tribes despite their differences in dialect, Sneve said. And the Dakota hymnal is a cherished part of services in the diocese.

By adding to those existing resources, the Episcopal Church has another purpose in mind: to help preserve Native languages that are at risk of being lost at a time when many younger Native Americans are learning English as their first language.

“Language and culture are so intimately connected,” South Dakota Bishop John Tarrant said. “A lot of anthropologists say when you lose your language you lose part of your culture.”

The Episcopal Church, through its historical missionary work with indigenous populations, was at least partly complicit in the U.S. government’s efforts to assimilate Native Americans into white culture while eradicating their culture, including language. In the face of that history, Tarrant said the church is offering “tremendous support” for cultural preservation efforts, particularly with the backing of Presiding Bishop Michael Curry and the Rev. Gay Clark Jennings, the House of Deputies president.

Tarrant also keeps in contact with the bishops in Alaska and Navajoland to share ideas about new ways to support indigenous communities. When Alaska received a $40,000 UTO grant last year to pursue a Gwich’in translation of the Book of Common Prayer, that helped motivate South Dakota to apply for its own translation grant.

“The church has been and should be a place where indigenous languages can be learned, expressed in that way, safeguarding them and promoting them,” Hauff said. “Any attempt that we as a church can make to preserve these languages is our obligation.”

Sneve, too, has been in contact with other dioceses that have undertaken prayer book translations, to receive guidance as he starts the process in South Dakota. His counterparts in the other dioceses have been friendly and helpful.

Once he forms committees to work on the translation, the committee members will start making “some hard decisions,” such as whether to include the entire Psalter, at the risk delaying publication. The house blessing is another example of a liturgical resource that the committees may decide is worth the time to produce, or else is something better left for the future.

Sneve has no definitive timetable yet for completing the task, but he estimates it will take at least two years before a translation is ready for publication.