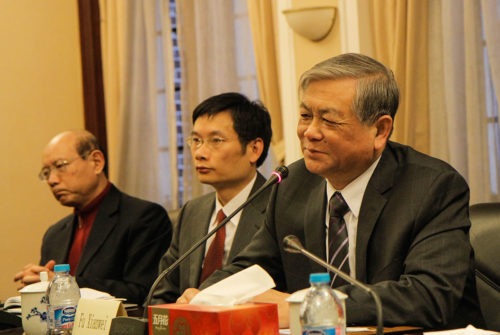 Elder Fu Xianwei, chair of the National Committee of the Three-Self Patriotic Movement of the Protestant Churches in China, addresses Presiding Bishop Michael Curry and his staff during a Feb. 22 meeting at the National Office of China Christian Council and the Three-Self Patriotic Movement in Shanghai, China. To Fu’s left are Gu Mengfei, TSPM’s associate secretary general and director of the CCC’s research department, and Elder Ou Enlin, director of overseas relations for the CCC/TSPM. Photo: Lynette Wilson/Episcopal News Service

[Episcopal News Service] Elder Fu Xianwei, chairperson of the National Committee of Three-Self Patriotic Movement of the Protestant Church in China and board chairperson of Nanjing Union Theological Seminary, passed away in Shanghai, China, on Aug. 20, aged 74.

Fu’s deep conviction and productive service to the Lord was a powerful encouragement to Christians in China. His immensely hardworking for the cause of the Church in China with consistent adherence to the Three-Self principle was a role model and support for his fellow colleagues. The ardent love and care for the state and the church over the decades of his leadership has been exemplified through his commitment to the reconstruction of theological thinking and the advocacy of the indigenization and contextualization of the Church in China.

Blessed are the dead who die in the Lord from now on.” “Blessed indeed,” says the Spirit, “that they may rest from their labors, for their deeds follow them!” (REVELATION 14:13)

The funeral in remembrance of Elder Fu Xianwei will be hosted at Shanghai Longhua Funeral Parlor (No. 210 Caoxi Road, Shanghai) at 9 a.m. on Sept. 5.