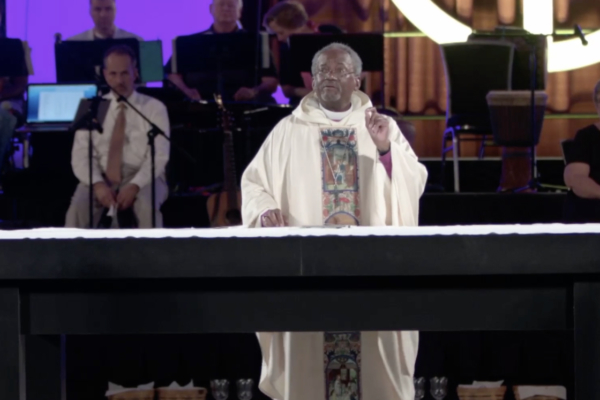 Presiding Bishop Michael Curry introduces The Way of Love during his sermon July 5 at the opening Eucharist of the 79th General Convention in Austin, Texas, in this image taken from an Episcopal Church video of the sermon.

[Episcopal News Service] Presiding Bishop Michael Curry spent much of his first three years as head of the Episcopal Church talking about Episcopalians being part of the Jesus movement. He has called them to follow Jesus into loving, liberating and life-giving communion with God, with God’s creation and with each other.

Curry provided an answer last month by launching a “rule of life” framework dubbed “The Way of Love,” featuring seven practices for Jesus-centered living. The churchwide response to the initiative so far has been overwhelmingly positive, Spellers said, and efforts to promote The Way of Love have just begun.

“You want to be people of the Jesus movement? You want to follow Jesus and to live his way? Well, his way is the way of love,” Spellers said. “And if we as a whole church commit to living a set of spiritual practices with conviction and in community, we will more and more live as Jesus’ people in this world.” 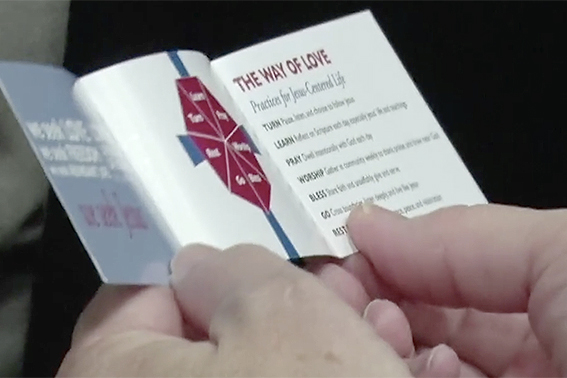 Worshippers were given Way of Love wallet cards at the July 5 opening Eucharist of the 79th General Convention in Austin, Texas, as seen in this photo taken from an Episcopal Church video of the service.

Curry first spoke of The Way of Love in his sermon July 5 for the opening Eucharist of the 79th General Convention in Austin, Texas. Since then, Spellers and her staff have produced more than 100,000 wallet cards for the initiative and posted additional print-ready materials to The Way of Love website. Those materials have begun showing up in church bulletins across the church, and Episcopal partners, including Church Publishing, Forward Movement and Forma, are developing and releasing their own Way of Love resources for congregations. Some bishops, meanwhile, have issued personalized messages to their dioceses inviting them to follow The Way of Love practices.

Those practices, hardly revolutionary, should be familiar to most Christians.

As we focus on the 1st discipline in The Way of Love, TURN, here is a question to ponder: Who will be your companion as you turn toward Jesus Christ?
Tweet your response so we can all learn from each other as we follow The Way of Love together! #WayOfLove pic.twitter.com/rKbLorEZVn

Curry, his staff and a group of outside advisers known as his “kitchen cabinet” began working on the framework in December. “We realized that we already have what we need in the tradition of the church going back centuries,” Curry said in his July 5 sermon, citing monastic traditions that have long relied on rules of life.

The presiding bishop also drew a comparison to the set of practices followed by the Rev. Martin Luther King Jr. and other leaders of the civil rights movement to focus their efforts. The Jesus movement, then, is built on the practices of The Way of Love, and Curry’s initiative aims to refocus Episcopalians on what it means to be a Christian in today’s world.

“I know and I believe that we in this church can help Christianity to reclaim its soul and re-center its life in the way of love, the way of the cross, which is the way of Jesus,” he said.

Spellers called this “an invitation to come home again.”

“If you look at what it takes to really grow spiritually vital Christian community, it’s not rocket science, but it does take commitment,” Spellers said. She thinks The Way of Love has been an early success because church members are hungry for spiritual formation and eager as Jesus’ followers to work for justice.

Church leaders also emphasize this isn’t a solitary journey. The shared commitment to The Way of Love echoes Episcopalians’ commitment to their baptismal covenant, a way of saying “yes” to God.

“That’s powerful, and it’s also what movements do,” Spellers said.

Spellers’ team plans to begin a major push on social media soon in support of The Way of Love, while encouraging local congregations to share their experiences, using the hashtag #WayOfLove. The team also is developing Way of Love liturgical materials that will be ready in time for Advent in December.

Wallet cards and brochures explaining The Way of Love can be downloaded from the website and printed for distribution locally. Spanish-language resources are being prepared. Congregations also are encouraged to experiment in how they incorporate The Way of Love into their parish life, part of an “open-source” approach to developing the initiative.

Looking for ways to engage in "The Way of Love" at home? "The Way of Love for Families" is a free resource and ready to download https://t.co/p1AR6LbnV0 #wayoflove #episcopal #jesusmovement pic.twitter.com/bBS6NlbJfl

St. Peter’s Episcopal Church in Conway, Arkansas, has paired each of the seven practices with a different liturgical season over the coming year, and The Way of Love will help shape all ministries, from the youth group to the senior citizen book club. Jerusalem Greer, the minister of formation and connection at St. Peter’s, is active in Forma and was part of the group Curry assembled to develop The Way of Love.

“One of the things that makes this really necessary right now is, as a culture, we feel a little free-floating, a little lost,” Greer said. “And I think this helps us create a trellis, to try to kind of cling to and grow up.”

And as Curry inspires more and more people with his talk of being part of the Jesus movement, “people want to know how do you do that,” Greer said. “I think it’s that age-old question, how then shall we live? … I want to figure out how to be light and hope in a very dark world.”

One of the questions The Way of Love asks is “Who will you walk with?” Forming discipleship groups will be an important step, to support each other and share experiences of spiritual growth, Spellers said. Parishioners may choose to form small Bible study groups, and several Episcopal seminaries have committed to developing on-campus gatherings centered on The Way of Love, including Virginia Theological Seminary, General Theological Seminary and the seminary at Sewanee: The University of the South.

“That gives us the chance to shape the leadership of the church and to deepen the spiritual roots for the next generation of Episcopal leaders,” Spellers said.

The initiative also is drawing attention from other corners of the Anglican Communion. A priest in Canada wrote recently to Spellers saying he’d like to print Way of Love posters for his church. A similar inquiry came from someone in the Anglican Church of Mexico.

Curry’s team conceived of The Way of Love as part of the Anglican Communion’s Season of Intentional Discipleship, an initiative following the theme of “living a Jesus-shaped life.” That language and vision pair with how Curry describes the Episcopal branch of the Jesus movement.

“I want to ask not only you, but every Episcopalian, to make a commitment to throw yourself into the hands of Jesus, and then live life out of that,” Curry said in his sermon at General Convention. “These tools may help you.”

Others in the Episcopal Church are helping to spread the word about The Way of Love.

“Any rule of life takes practice, and really that’s the point, practice. In a sense we never stop practicing,” Diocese of Olympia Bishop Greg Rickel said in a video message encouraging Episcopalians there to take up The Way of Love. “It’s a lifelong practice, one most of us never get to be perfect, but in this, the practice is the gift.”