[Episcopal News Service] The election in November will catch no one by surprise at the Church of St. Martin-in-the-Fields in Philadelphia, Pennsylvania. Dozens of church members are participating in voter education drives, and the congregation’s goal is 100 percent parishioner turnout on election day.

Civic engagement is running just as high at Holy Cross Episcopal Church in Decatur, Georgia, an Atlanta suburb. The congregation is sending parishioners to canvass the neighborhood around the church in support of statewide efforts to register up to 1.2 million new voters.

And in Indiana, the Diocese of Indianapolis has hosted voter outreach events where church volunteers are part of an interfaith initiative seeking to reach more than 100,000 Indianans who haven’t voted before.

“We often talk about how Jesus’ life shows us to be politically active. … We need to care about the most vulnerable members of our community,” said the Rev. Carol Duncan, a deacon who is coordinating St. Martin-in-the-Fields’ participation in election-related efforts. Episcopalians like Duncan have been outspoken in their call to “vote faithfully” because the church alone cannot change unjust systems. “You can’t do that unless you vote,” Duncan said.

The Episcopal Church’s Office of Government Relations is based in Washington, D.C., near the Capitol and offers resources to help Episcopalians mobilize for elections in nonpartisan ways. Photo: David Paulsen

Although Episcopalians may be motivated by personal political beliefs, their church-based election efforts are necessarily nonpartisan. Those efforts also are grounded in church policies established by General Convention, which just last month passed additional resolutions calling Episcopalians to greater political engagement. That engagement has the continued support of the church’s Office of Government Relations in Washington, D.C.

“Voting and participation in our government is a way of participating in our common life, and that is a Christian obligation,” Presiding Bishop Michael Curry said in a video statement before the 2016 presidential election. The Office of Government Relations’ Episcopal Public Policy Network referenced Curry’s comments again this week in an updated message about the upcoming elections.

How does someone “vote faithfully”? The message issued Aug. 7 provides resources, including links to voter registration information, states’ voting policies and polling locations. It also links to the Episcopal Church’s voter “toolkit,” which provides further guidance on individual action and community mobilization in ways guided by faith.

“We encourage Episcopalians to engage in the democratic process this fall by promoting voter registration, learning about candidates on the ballot in your area, making a plan for yourself to vote on Election Day, and helping others to do the same,” Office of Government Relations Director Rebecca Linder Blachly told Episcopal News Service. “Our Vote Faithfully Toolkit provides resources for parishes and individuals to get involved and to participate in our civic duty.”

We're aware folks want physical stickers of this graphic! Working on some troubleshooting with a recommended printer and will get back with folks for recommendations on ordering. #VoteFaithfully pic.twitter.com/sISJrbQUp7

The Rev. Fatima Yakubu-Madus, missioner for community engagement for the Diocese of Indianapolis, saw the emailed message this week and thought it was perfect material to adapt for an upcoming diocesan newsletter. Not everyone in her diocese has time to volunteer with the ongoing voter engagement drives.

Yakubu-Madus took on the missioner role just this year, after serving since 2010 as a deacon at St. John’s Episcopal Church in Speedway, Indiana. While at St. John’s, she regularly participated in neighborhood canvassing – knocking on doors, encouraging people to vote and helping them register if they weren’t yet registered.

She now is active in the collective of congregations known as Faith in Indiana, which is leading the effort to reach more than 100,000 unregistered voters and persuade them to go to the polls on Nov. 6. Church volunteers have called some of those residents during phone banks the diocese has hosted at Christ Church Cathedral in Indianapolis and at St. Christopher’s Episcopal Church north of the capital in Carmel. The Episcopal volunteers are specifically focused on reaching residents in a legislative district with historically low voter turnout.

Why is that a church function? Civic action is rightly influenced by faith, Yakubu-Madus argued, taking her cue from the presiding bishop’s comments on the subject.

“We have to participate in voting,” she said. Government agencies have unparalleled capacity to fulfill the Christian mission of serving people living on the economic margins of society, and “nobody’s going to if we don’t vote.”

“Our church has policy that urges all of us to advocate for the right to vote, including eliminating barriers to voting,” Blachly said. “Voter registration issues are addressed at the state level, so we encourage you to get involved.”

Two resolutions approved at General Convention in Austin last month address voting rights issues. Resolution C047 commits the church to advocating in support of the principle of “one person, one vote” – that all citizens’ votes should have equal impact on electoral outcomes.

Although the resolution doesn’t elaborate, its supporting explanation lists some examples of areas of concern: “Some impediments are as old as our nation and are embedded within the U.S. Constitution, such as the electoral college and the manner in which U.S. senators are elected,” the explanation says. “Other impediments are newer or have become increasingly problematic over recent decades, such as gerrymandering, variations in ballot access and in how votes are cast and counted across the country, certain aspects of campaign financing, and the increasingly sophisticated technology used in micro-targeting voters.”

Resolution D003 condemns measures that result in voter suppression and supports steps to increase voter participation, such as “policies that will increase early voting, extend registration periods, guarantee an adequate number of voting locations, allow absentee balloting without the necessity of having an excuse, and prohibit forms of identification that restrict voter participation.”

The resolution also singles out partisan gerrymandering for criticism and urges the National Conference of State Legislators to develop a fair process for establishing legislative and congressional districts.

Gerrymandering is the tactic of drawing districts that will favor one party over the other in elections, usually by packing similar voters into just a few districts or diluting them across several districts where they will remain in the minority. The U.S. Supreme Court chose not to rule on the constitutionality of partisan gerrymandering in a decision issued earlier this year, leaving open the door to further legal challenges.

The debate over gerrymandering is complicated further by gerrymandering’s use, under the Voting Rights Act of 1965, to ensure greater minority representation in Congress by drawing district lines to create what are known as “majority-minority” districts. Critics have argued, however, that this has had the long-term partisan effect of pooling more Democratic voters together and ceding more districts to Republicans.

So why should churches and Christians get involved?

“For the follower of Jesus, gerrymandering undercuts our fundamental vow to respect the dignity of every human being,” the Rev. Jarrett Kerbel, rector of Philadelphia’s St. Martin-in-the-Fields, wrote in an October 2017 article. “Participation in shaping our common life is a Christian duty and something Christians regard, respect and protect for all people regardless of affiliation, belief or nonbelief.”

Pennsylvania was then grappling with its own gerrymandering controversy, and in January, the state Supreme Court ruled the congressional district boundaries were unconstitutional. The court followed up with a map establishing new district lines that will take effect when the next term of Congress begins in 2019. 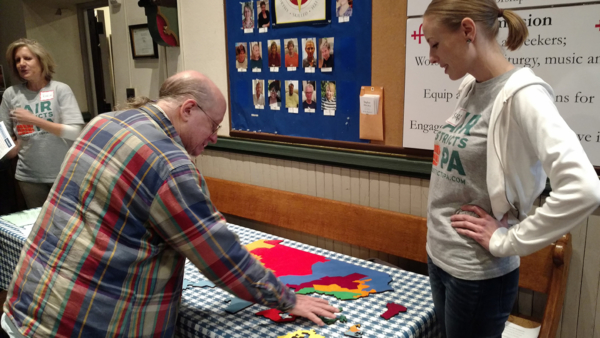 St. Martin-in-the-Fields, meanwhile, has turned its focus to voter education and voter registration.

“We know how important voting is, particularly this year,” said Duncan, St. Martin’s deacon. Her church has partnered with a group called POWER, an interfaith coalition of more than 50 congregations focused on community organizing in southeastern and central Pennsylvania.

POWER organizers led a forum in July at St. Martin-in-the-Fields, and about 40 parishioners attended to learn more about voter mobilization efforts, Duncan said. A training is scheduled Aug. 26 to coincide with the kickoff event for a voter education drive.

Other examples of Episcopal engagement can be found across the country. Good Samaritan Episcopal Church in San Diego, California, will host the League of Women Voters on Sept. 29 for a presentation about state propositions. The Diocese of Texas’ Episcopal Health Foundation partnered in 2016 with Mi Familia Vota to register Latino voters, and similar efforts in metropolitan Houston and Atlanta are in the works for this election cycle.

“People’s votes really do matter,” said Soyini Coke, a member of Holy Cross Episcopal Church in Decatur, who is coordinating the congregation’s voter registration efforts in the metro Atlanta area. 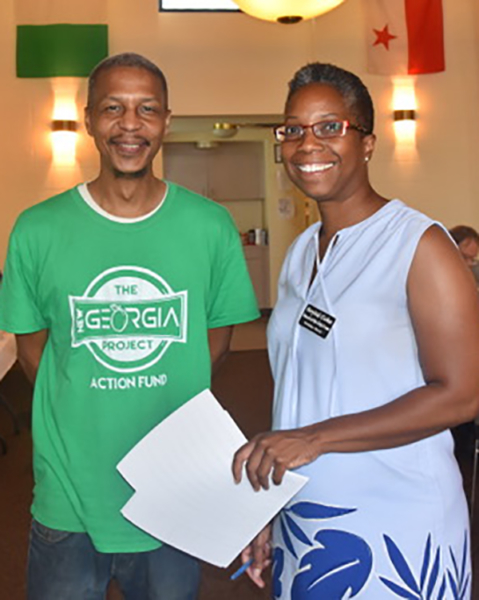 Coke admitted she was one of the citizens who never voted in elections and had been disinterested in the political process – until the November 2016 presidential election. She was disheartened by the outcome but committed herself to turning her anger into action.

“It is not sufficient to just complain,” she said, so she and about 20 parishioners met at Holy Cross on Aug. 4 for voter registration training followed by making direct contact with voters. Some broke into teams of two to knock on doors, guiding unregistered voters through the process of signing up. Others remained at the church to call potential voters on lists provided by the New Georgia Project.

The nonpartisan New Georgia Project has been registering Georgians to vote for several years with a goal of full participation of all eligible voters. It was able to identify 400 unregistered residents within a two-mile radius of Holy Cross, Coke said. The Aug. 4 registration drive generated 396 phone calls, 97 contacts with voters and seven new voter registrations.

That’s just the beginning. Holy Cross hopes to organize similar drives in the months leading up to the November election, Coke said. It is a majority black church, and such activism has deep roots in the black church tradition, she said.

“It’s very natural there,” she said. “If you’re going to talk about activism in the black community, the church is at the center of that and always has been.”