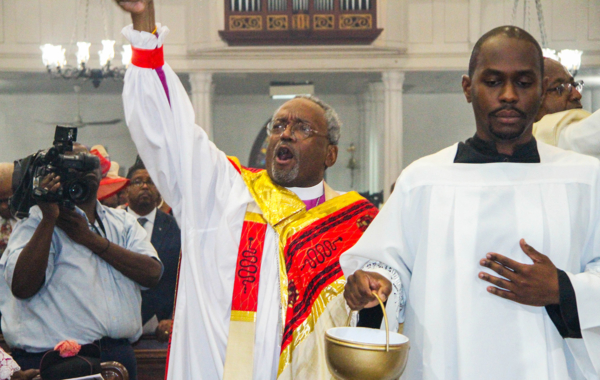 [Episcopal News Service — Nassau, Bahamas] Presiding Bishop Michael Curry electrified hundreds of worshippers who chanted “Love Lifted Me” along with him at Christ Church Cathedral here in Nassau during the July 24 opening Eucharist of the 50th annual meeting of the Union of Black Episcopalians.

More than 800 Bahamian and U.S. laity, clergy, dignitaries and officials responded passionately as Curry invoked the hymn, a favorite of his grandmother: “I was sinking deep in sin, far from the peaceful shore, very deeply stained within, sinking to rise no more, but the Master of the sea heard my despairing cry, from the waters lifted me, now safe am I.

Curry’s sermon, laced with frequent call-and-response, spontaneous laughter and sustained applause, echoed his familiar “Love is the way, the only way, there is no other way” mantra, as he challenged worshippers to embrace Christ’s ministry of reconciliation.

UBE President Annette Buchanan also invoked the rich spiritual heritage of black Episcopalians. She reminded the congregation that although the organization is observing its 50th annual conference, its precursors date to the pre-Civil War era.

“African-Americans were in the Episcopal Church prior to the civil war,” Buchanan told the gathering during the service. “We were the largest number of congregants in the church because we were slaves and Episcopalians.”

The earliest known national organization among black Episcopalians was the Protestant Episcopal Society for Promoting the Extension of the Church Among Colored People, founded by the Rt. Rev. James Theodore Holly of St. Luke’s Church, New Haven, Connecticut, who is considered the first African-American bishop in the Episcopal Church.

That organization began in 1865 with four clergy and seven congregations, according to the Rev. J. Carlton Hayden, in an article on the UBE website. Holly later served as bishop of Haiti.

Post-Civil War, many former slaves left the Episcopal Church, Buchanan said, adding, “but those of us who are here decided we were going to make this church what it said it was going to be — a place where all are welcome and where there will be justice for all.”

Buchanan said more than 300 youth and adults, laity and clergy registered for the July 23-27 conference, themed “Glory of the Past, Hope for the Future” at the Meliá Nassau Beach Resort. “Those of us who are here are descendants of those folks, who said we are not going anywhere,” she said. “We are going to make this church a better place.”

The Rt. Rev. Laish Zane Boyd Sr., bishop of the Anglican Diocese of the Bahamas and the Turks and Caicos Islands and celebrant at the three-hour service, welcomed Curry and UBE conference participants.

“UBE is 50 years old and has chosen to hold its annual conference for the first time outside the U.S., and we approve,” Boyd said amid laughter and applause. 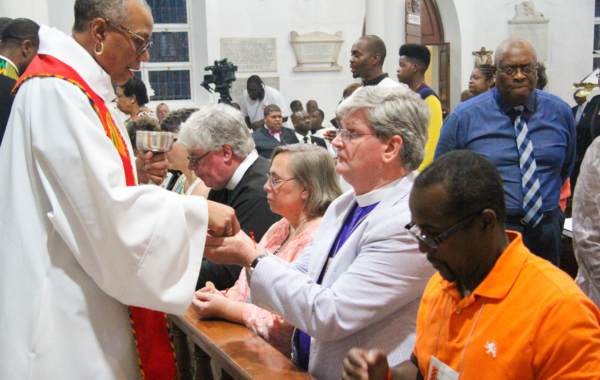 During the service, the Very Rev. Patrick L. Adderley, dean of Christ Church Cathedral in Nassau, said the congregation’s first building was erected between 1670 and 1684. Spaniards destroyed it in 1684, and also a subsequent building, in 1703. The current Gothic-style building is made of locally cut limestone rocks, held together by their size and weight rather than cement, he said.

The current building opened in 1841 and was named a cathedral by Queen Victoria in 1861. At the same time, she designated Nassau a city, “so there is a close and abiding relationship between the cathedral and the city,” he said.

The Bahamas, a British crown colony since 1718, became an independent commonwealth in 1973 and celebrates July 10 as its Independence Day.

The prime minister, the rock star and the power of love

Curry quoted both four-term British Prime Minister William Gladstone and rock guitarist and singer Jimi Hendrix as saying, “When the power of love overcomes the love of power, then the world will know peace.”

It helped illuminate further Curry’s message of love and reconciliation, and 2 Corinthians 5, the text he chose for his sermon. In it, St. Paul describes believers as new creations, and because Christ died for all, there is a new creation and believers have been given a ministry of reconciliation.

This way of love, the love of Christ “is so powerful, so profound, so awesome that it can turn the world upside down, which is actually right side up,” Curry told the gathering.

It can also change the way people relate to one another, personally, interpersonally, communally, politically and economically. “Love is surely the way. Turn to your neighbor and say, ‘Love is the way,’” Curry said.

He drew laughter and applause with “I attended a wedding a few months ago,” referring to his preaching at the royal wedding of British Prince Harry and U.S. actress Meghan Markle, a sermon that propelled him into the international spotlight.

After the wedding, he joined Archbishop of Canterbury Justin Welby at a rally attended by about a thousand youth. There, he said, young people told him, “We really want to believe you. We want to believe that love can change us and can change this world, but it’s hard to believe that. Do you really believe what you say? Is love really the way?”

Curry invoked the names of those who organized and mobilized love, including South Africans Nelson Mandela, Steve Biko and Anglican Archbishop Desmond Tutu; Mahatma Gandhi; U.S. civil rights worker Fannie Lou Hamer; and Martin Luther King Jr. “If you don’t believe them, ask Moses. And if you don’t believe him, ask Jesus,” Curry said, amid applause, adding, “Love can lift you up.”

Jesus was crucified by “religious folk” not by atheists, Curry said. “I’ve been a priest almost 40 years,” he added, amid laughter, “and let me tell you something, ain’t no atheist put grey hairs on my head.”

Rather, Jesus was killed by “an unholy alliance of religion, economic power and political power … self-interest and selfishness,” Curry said.

He drew raucous applause and laughter saying, “Pontius Pilate should have listened to his wife. Pilate’s wife told him, ‘I’ve been having a dream about this man and you need to leave that brother alone.’”

Instead, Curry said, Pilate ended up “a footnote appended to the Nicene Creed.” Pilate and others thought the crucifixion finished Jesus, but “Jesus was very wise to understand that in the kingdom there is radical equality,” Curry said. “In Christ there is no male or female, no Jew or Greek, all are one in Christ.”

As Mary Magdalene and other women went to the tomb early Sunday morning, to do what love required, to anoint Jesus and give him a proper burial, they discovered the risen Christ, he said.

Again, the congregation responded enthusiastically and passionately when Curry said, “If Jesus had not had women disciples and apostles and followers, we still might not know he rose from the dead.”

Curry continued by saying, “Thinking that the self is the center of the universe and the world and it’s all about me and you are on the periphery, when that selfishness, self-centeredness takes control, you have a world bent on destruction … [and it is] the most destructive force in the universe. It can destroy families, communities, churches, nations and, if left unfettered, will destroy creation itself.

And, drawing sustained applause, laughter and shouts, he asked, “What would the White House look like, if love was the way?”

Sobering, he recalled the July 8 prayer service that Episcopalians led outside the T. Don Hutto Residential Center near Austin, Texas, during the 79th General Convention of the Episcopal Church. The detention facility, a former medium security prison, has housed female immigrants and asylum seekers since 2009.

“And we stood there and bore witness,” Curry said, “while some in the group approached the center as close as police would allow and held up signs saying, ‘God loves you.’ ‘We’re here for you.’

“And they shouted to the women, ‘God loves you. God loves you.’ Most of the women inside spoke only Spanish. But the Holy Spirit did some translating because they understood what they were saying.

“And, inside, the women had towels and they were waving their towels in the windows.

“You can count on, you can bank on, you can commit your life to the way of Jesus, cause his love will never fail.”

The Diocese of the Bahamas and the Turks and Caicos Islands encompasses some 50,000 Anglicans.

The UBE conference continues through July 27 and features President of the House of Deputies the Rev. Gay Clark Jennings and other guest preachers and celebrants, as well as a diverse range of workshops.