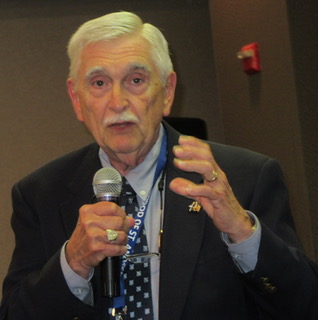 He’s revamped and re-invigorated this 138-year-old men’s ministry. Membership is up.

But he also pointed out one massive problem – the transition from a 19th-century dues-paying mentality to a 21st-century ministry pledge offering given out of thanksgiving.

“The idea that we can run this entire operation with volunteers left the station 20 years ago,” Butcher said.

In addition to the hundreds of local ministries undertaken by the brotherhood’s 5,162 members in 358 chapters throughout the U.S., the national brotherhood now supports and helps conduct seven ministries: discipleship and mentoring, Boy Scouts and youth, restorative justice, veterans affairs, racial reconciliation, human trafficking and recovery.

The brotherhood moved its headquarters from Ambridge, Pennsylvania, to Louisville, Kentucky.

In January 2017, the executive board hired Tom Welch to be the brotherhood’s first executive director in more than 12 years.

Here is a report on the day-by-day activities of the Brotherhood Triennial at the Embassy Suites Arboretum in Austin, which concluded July 7:

Presiding Bishop Michael Curry delivered the welcoming address, arriving from his duties at the Episcopal Church General Convention 10 miles away.

Curry praised the brotherhood’s now-seven national ministries. “Think about what this says about our commitment to our communities,” he said.

After a report on General Convention business, Curry ended by proclaiming loudly, “God bless the brotherhood.”

Just prior to the presiding bishop’s talk, Butcher offered his address. It contained a detailed look at the background and reasons for the organization’s many upgrades.

Following Butcher’s address, Senior Vice President Jack Hanstein led the group in a formal vote on various changes to the organization’s constitution and bylaws. The brothers approved the changes unanimously.

The triennial’s second day began with a homily by 91-year-old the Rev. Sid Gervais of Round Rock, Texas. He emphasized that there “is only one church. None of us has ever been baptized an Episcopalian. Or a Methodist.”

“The church makes mistakes when it begins to think of itself by denominations,” Gervais said. “There is no such thing as a ‘cradle Episcopalian.’

“There is a job before us and we all know what it is.”

Sticking to financial issues, the National Council next tackled the Sept. 2018-Dec. 2019 budget.

The 16-month 2018-2019 budget of $341,139.47 contains expense and travel allowances for elected officers, province presidents, missional theme vice presidents and the Anglican Liaison, as well as stipends for regional workshop speakers.

It provides assistance for regional workshops. Fourteen regional workshops took place in the last 18 months, with an aggregate attendance for these sessions and other national council meetings totaling 638 brothers participating.

After workshops on evangelism, scouting and human trafficking, the brothers were introduced to Forward Movement Executive Director the Rev. Scott Gunn, who talked about his seven years with the Episcopal Church ministry that publishes “Forward Day by Day” and other material. Gunn launched into a spirited discussion about evangelism.

“Once I got a great car wash for $12 at a new place in town,” Gunn told the 92 brothers attending the triennial. “I told everybody I knew about this great new car wash. I bet I told 100 people. But then I thought, ‘Why don’t I tell that many people about my faith, which is the most important thing in my life?’

“It was the beginning of a personal ministry of evangelism.”

He noted that the Episcopal Church is losing one percent of its membership every year – a figure Gunn said could easily be reversed.

“They used to say typical Episcopalians invite someone to church every 40 years,” Gunn said. “That was probably coined during the era of the Greatest Generation. Back in their day, you didn’t have to invite people to church – they just came. Not only to church but to the Rotary Club, the PTA and other community organizations.

“It was an entirely different story for their children, the boomer generation, the largest in U.S. history. The main thrust of the boomers was simply to ‘do good.’ It didn’t matter why or for whom.

“For many but not all boomers, the church was just as suspect as the government and corporate America,” Gunn said.

“Their children were labeled Generation X. After seeing their parents and grandparents struggle with three wars, a depression, assassinations and civil unrest, Generation Xers responded by partying. Gen Xers came of age in the 1980s, a decade of excess, cocaine and ‘greed is good.’ The church? What’s that?

“And their children rebelled by becoming a curious, studious bunch. They are interested in a lot of things, including spirituality. This is the millennial generation so coveted by advertisers and, yes, the church. They don’t reject society like their grandparents and parents. They will visit your church if invited, and they might come all on their own.”

Then he offered a practical solution to stop the decline.

“If a significant number of Episcopalians invited two people per year to church, this decline could turn into a great revival of the Episcopal Church,” Gunn said.

“Our liturgy, music and the fact that we kneel are among the unique things that set us apart,” he said. “Every time someone kneels, they are searching for Jesus.”

The Rev. Matt Marino from the Episcopal Church of St. John the Divine in Houston conducted a rousing workshop on discipleship and mentoring.

“Now you can see the importance of discipleship,” Marino said. “The youth of today have been advertised to and have seen more ads than any generation in history. They have great BS detectors.”

Marino says he’s noticed denominations often spend $150,000 on a college chaplain only to find their college ministries work better when the students themselves manage things.

To gain an understanding of how millennials think and how to minister to them, Marino recommends Googling “Simon Sinek” to find videos, talks and books by this British-American author of “Start with Why” and three other books.

– Jim Goodson is editor of the St. Andrew’s Cross.