The House of Bishops, meeting on the last day of the 79th General Convention, expressed their “deep gratitude” to the Schentrup family and Abigail Zimmerman for their “presence and witness” against gun violence.

At a downtown Austin park on July 8, Philip and April Schentrup, members of Saint Mary Magdalene Episcopal Church in Coral Springs, Florida, shared their emotional and spiritual journey before dozens of bishops and hundreds of onlookers following the Ash Wednesday murder of their daughter Carmen in the Marjory Stoneman Douglas High School shooting.

Carmen was among the 17 students and educators killed by a gunman at the Parkland, Florida. Resolution A279 also commends the keeping of Carmen to the “Almighty God” as well the 16 others killed and all victims of gun violence.

Specifically, the resolution “expresses our deep gratitude to Philip and April Schentrup and their children, Evelyn and Robert,” and to Abigail Zimmerman “for their presence and witness among us.”

Also at the July 8 gathering, Zimmerman, a ninth-grader and member of Saint Alban’s Episcopal Church in Waco, Texas, who co-led a school walkout in March in response to the Douglas High School massacre, shared the story of her work to organize students to campaign against gun violence.

The bishops’ resolution “supports the young people of this church and their fellow students who have been striving to turn a moment into a movement for lasting chance in the culture of violence that infects our countries at every level of our societies.”

The issue of equity for lay church employee pensions arose at General Convention from a proposal by a subcommittee of the special House of Deputies Committee on Sexual Harassment and Exploitation. They called for increasing required employer contributions to lay pension plans from the current nine percent to 18 percent, to match what is contributed for clergy.

While Resolution A045 was amended to remove the mandated increase and instead have the Church Pension Fund study the steps necessary to provide equity in the pension plans for lay and ordained church workers, it did affirm “that in the interests of justice the pension plans for clergy and lay employees should be as equitable as possible.”

During debate in the House of Deputies, the Rev. Terri L. Bays, deputy from Northern Indiana, said clergy and lay deputies who serve on vestries can go home and immediately address the issue of equity by virtue of their responsibility to negotiate compensation packages with lay employees. “Just because there is not a mandate, that does not mean that we cannot go back and demand this equity every time we negotiate a letter of agreement with our lay employees,” she said.

Bays, who handles the diocese’s transition ministry process, said she regularly gets calls from vestry members “who want to know exactly where that cut-off point is so that they can avoid giving benefits to their lay employees.” She said, “We can put a stop to that, case by case, even as we await a decision on the steps necessary for a churchwide mandate.”

Another action that could affect lay employees is Resolution B006, which requests that church employers provide a letter of agreement for any church employee, as part of a transparent hiring process and in accordance with the guidelines of the Manual for Business Methods in Church affairs.

The resolution says such letters of agreement can describe duties and responsibilities of the position, including details about salary and benefits, and may also include provisions for an annual performance evaluation, procedures for the reconciliation of disagreements, and policies concerning dissolution. 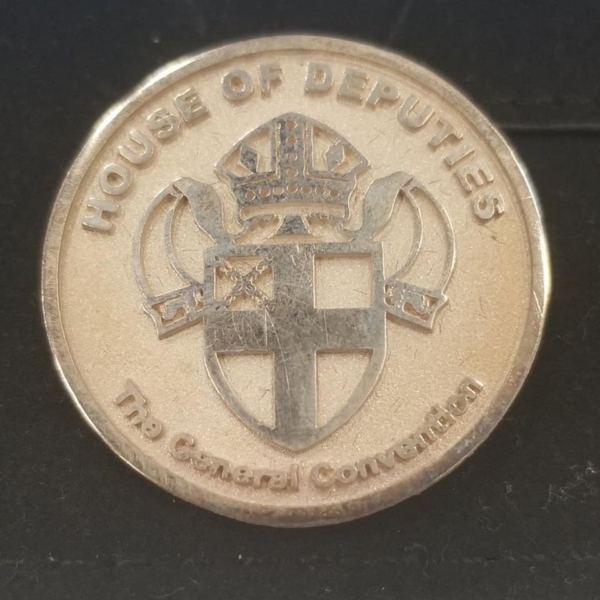 The Rev. Gay Clark Jennings, president of the House of Deputies, presented seven deputies with the 2018 House of Deputies medal for distinguished service to the Episcopal Church. Photo: Amy Peden Haynie

Based on the actions of the 79th General Convention, a new and simplified parochial report will be designed over the next few years. Resolution A053 charged the House of Deputies Committee on the State of the Church with designing a simplified report that is “relevant to the diversity of the Episcopal Church’s participation in God’s mission in the world.”

The resolution further asks that the data in the report be “easily collected and compiled” and relevant to the work of those who utilize the data. Finally, the resolution requests an improved user interface for entering and downloading data.

During testimony on July 5, skeptical legislative committee members expressed concerns that the changes specified in the resolution might place too much of an added burden on congregations. There was also concern expressed about the relevance of the data collected. The resolution that was approved at the convention is an amended and streamlined version of what was originally proposed.