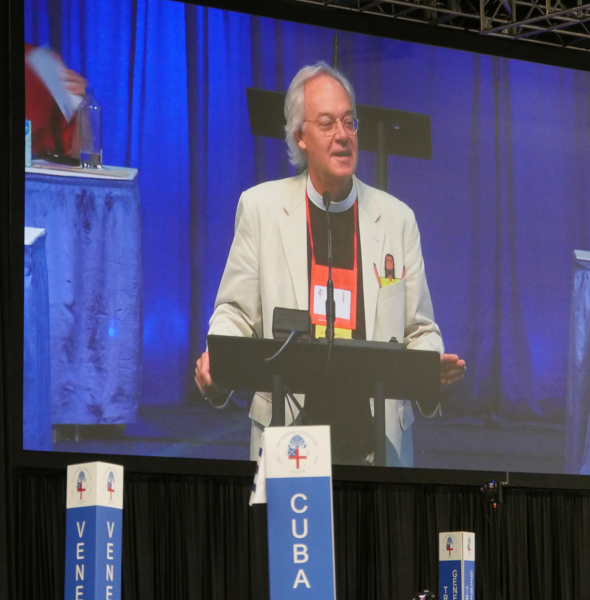 The Very Rev. Sam Candler, deputy from Atlanta and chair of the legislative committee that considered all of the convention’s marriage resolutions, urged the House of Deputies July 13 to accept the bishops’ technical amendment to Resolution B012 and not make any changes. The deputies agreed. Photo: Mary Frances Schjonberg/Episcopal News Service

[Episcopal News Service – Austin, Texas] Deputies dotted the last i and crossed the last t on July 13 with a historic resolution giving all Episcopalians the ability to be married by their priests in their home churches.

Resolution B012 had gone from the House of Deputies to the bishops and back to the deputies on its road to approval. Deputies overwhelmingly approved a heavily amended version of the resolution on July 9, and the House of Bishops added a technical amendment two days later that does not change B012’s goal of giving full access to two trial-use marriage rites for same-sex and opposite-sex couples approved by the 2015 meeting of General Convention (via Resolution A054). 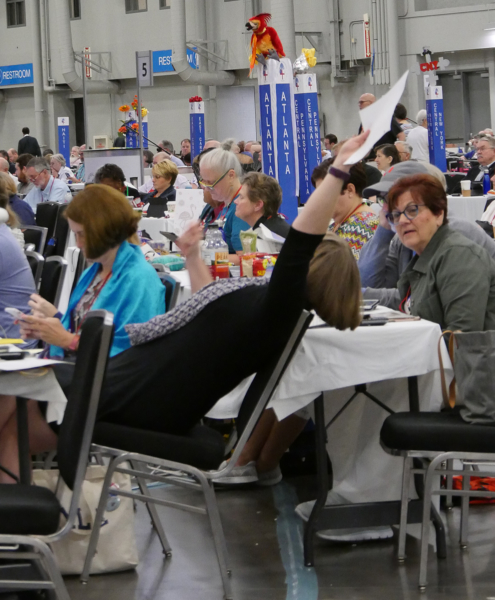 A Lexington deputy holds up the deputation’s paper ballot documenting its vote. During votes by orders, deputies vote on paper ballots and then deputations calculate the results and cast their vote electronically. Photo: Mary Frances Schjonberg/Episcopal News Service

Fifty-six votes in each order were required for passage. Divided votes are recorded when the clergy or lay members of a deputation split their votes between yes and no. General Convention resolutions must be adopted by both houses with the same text, and that is what deputies did early in the morning session of the last day of the 79th meeting of General Convention.

Scattered applause started to be heard among the deputies, but the Rev. Gay Clark Jennings, president of the house, cautioned that the body’s rules forbid such celebrations.

The resolution provides for:

The resolution also eliminated the original B012’s call for a Task Force on Communion across Difference. Such a group was created via a separate resolution, A227.

“We have already engaged in a grace-filled debate – an honorable and healthy debate, discussion and struggle,” the Very Rev. Sam Candler, deputy from Atlanta and chair of the legislative committee that considered all of the convention’s marriage resolutions, told the House of Deputies in urging passage without further tinkering. “We were reminded of the significant compromise that was made by various committed constituencies and holy saints of this church.”

No one spoke against the resolution during the House of Deputies’ short debate. 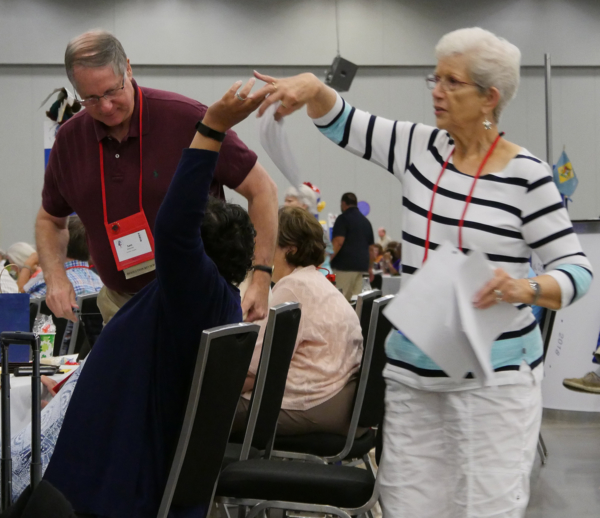 A House of Deputies page collects the written version of the Diocese of Southern Virginia’s vote by orders on Resolution B012. Photo: Mary Frances Schjonberg/Episcopal News Service

The Rev. Scot McComas, Fort Worth deputy, told his colleagues that if they passed B012 they would be acting as pastors to all the people of the Episcopal Church. Yet, he noted, “For 40 years our LGBT brothers and sisters have been at the back of the bus and, every so often, they are invited to move forward one row at a time.”

The Rev. Susan Russell, Los Angeles deputy and longtime leader in the effort for full inclusion of LGBTQ people in the life of the church, described the “long and winding road” that the Episcopal Church had traveled to get to this point. She said she supported B012 “recognizing that this is a hard-won compromise but one which I believe will lead us forward into that work as the Episcopal branch of the Jesus Movement.”

She reminded the house that its debate was being livestreamed and that Episcopalians in the dioceses of Tennessee, Dallas and Florida (three of the places in which the bishops have not allowed the rites to be used) “where the faithful in the pews are waiting for us to let our ‘yes’ be yes – to say, ‘we do’ to marriage for all.”

East Carolina Deputy Joan Geiszler-Ludlum, who chaired General Convention’s Task Force on the Study of Marriage, implored deputies to complete convention’s actions on marriage. “We are fond of saying around the Episcopal Church that all are welcome, and all means all, y’all.”

Long Island Bishop Larry Provenzano offered B012 in response to proposed Resolution A085 from the task force, which was proposed in part to give a way for Episcopalians to use the rites in eight of the church’s 101 domestic dioceses in which the diocesan bishop refuses to authorize use of the trial-use marriage rites.

“I think this is a really important moment for the church,” Provenzano said in an interview with Episcopal News Service just after the deputies’ decision. “We do this without there having to be one side wins and one side loses. Very much like the theme of the whole convention, there’s a great movement for the church to really be the church in this time.”

Vermont Bishop Tom Ely, who has long been involved in crafting resolutions to move the church closer to full sacramental inclusion of LGBTQ, said Episcopalians also need to know that the rites described in B012 are available to everyone in the church, not just same-sex ones. The resolution calls for studying how the rites are used across the church.

“So, let’s see if we like the actual liturgies,” Ely said. “Do these liturgies convey the spirit of what we want? Do they pray well? Do they work for all couples? Are these worthy of inclusion, at some point, in the Book of Common Prayer?”

Chicago Bishop Jeff Lee called B012 “an elegant solution for moving forward in a way that respects the role of bishops as the chief liturgical officers in their diocese” similar to that achieved earlier in the contentious issue of prayer book revision. Lee chaired the bishops’ part of the cognate legislative committee that reviewed the marriage resolutions.

The compromise was “built on the generosity of people who would rather have seen it go further in one direction or another,” Lee said. “And, that’s a remarkable thing about this convention, I think: that willingness on the part of people who cherish and really invested themselves in having ‘all this’ or ‘all that’ being willing to let go of the things they cherish for the sake of moving forward together.”

Resolution A054-2015 said that clergy could only use the rites under the direction of their bishop. This convention’s A085 would have required bishops to make provision for all couples asking to be married to have “reasonable and convenient access” to the two trial-use marriage rites. However, it also would have added the two trial-use marriage rites to the Book of Common Prayer and amend the prayer book’s other marriage rites, prefaces and sections of the Catechism to make language gender neutral. That change was a sticking point for many.

The original version of B012 would have required bishops who would not authorize the rites to allow congregations to receive Delegated Episcopal Pastoral Oversight (DEPO) from another bishop who would provide access to the liturgies. It removed the prayer book element.

Deputies agreed to a version of B012 that took away the DEPO option and placed the decision-making power for using the rites with rectors or other clergy in charge of congregations. The bishops’ amendment comes in the seventh resolve of the resolution and adds the words “provided that nothing in this resolve narrows the authority of the rector or priest-in-charge (Canon III.9.6(a)).”