Sisters in both houses 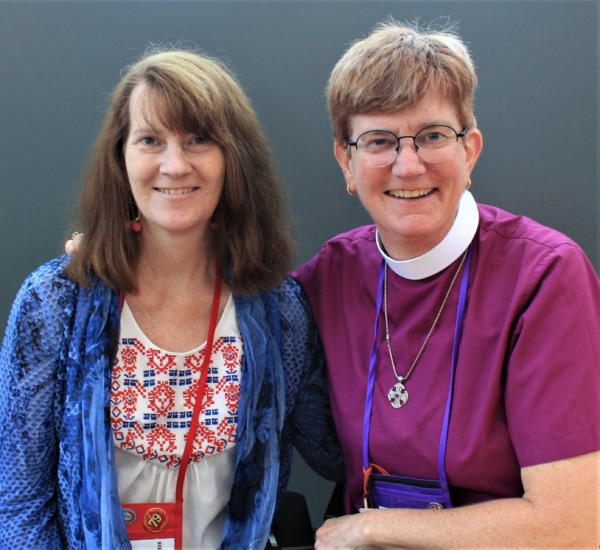 Deputy Jeanine Baunsgard (left) and Bishop Gretchen Rehberg are the first sisters to serve both houses at the same time at a General Convention. The 79th General Convention has many family connections, with fathers and sons, mothers and daughters and other familial combinations represented.

For the first time at general convention two sisters – not in-laws, not nuns or religious – are serving in both houses and from the same diocese. Deputy Jeanine Baunsgard represents the Diocese of Spokane in the House of Deputies, and her sister, Bishop Gretchen Rehberg, also from Spokane, serves in the House of Bishops. There is a long family tradition at General Convention for the Rehbergs. The sisters’ father, Wallace, was a deputy from 1976 through 1991, then their mother, Margaret, served in the HOD from 1994 through 2003.

Gretchen served in the HOD as a clergy deputy in 2009 and 2012. She was ordained a bishop in March 2017, moving to the House of Bishops for the 2018 General Convention. Jeanine carries on the nearly 15-convention family tradition with her second turn as a deputy, 2015 and 2018.

“I am honored and blessed to be a deputy for Spokane. As I look around the house [of Deputies] and listen to the songs and debate, I feel dad and mom’s presence, and I feel that I am honoring them. Although the process has changed dramatically with new technology, the same Holy Spirit is with us,” said Jeanine.

Wallace died in 2005, and the family did not serve in the 2006 General Convention. Gretchen said that her mother has attended Episcopal Church Women Triennial Meetings and other events related to General Convention since being a deputy, but this year is home taking care of the bishop’s dog.

“Jeanine and I know we are the first sisters [to serve both houses at the same time] because there just are not that many women bishops,” Gretchen said.

‘Everything is going OK’ despite record number of resolutions

The 79th General Convention is moving through a record 502 resolutions, but House of Deputies Parliamentarian Bryan Krislock told his colleagues at the opening of the morning legislative session July 12 that “everything is going OK.”

“We have every expectation that we will complete our business before the close of convention tomorrow and have enough time to discuss the very serious issues and resolutions that are before this house,” Krislock said.

Krislock said that “most of the time” in the sessions has been spent dealing with procedural issues, points of order and parliamentary inquiries rather than actual debate on resolutions. He projected a graph on the large screens in the house to illustrate his point. 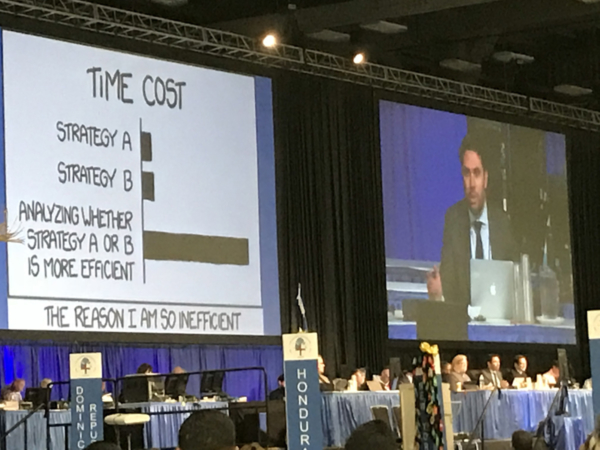 “Once the debate starts, it really moves rather smoothly,” he said.

Meanwhile, the House of Bishops spent the first 90 minutes of the two-and-a-half-hour morning legislative session completing its legislative calendar and then was waiting on resolutions from the deputies.

If the pace in the House of Deputies slows down too much, Krislock said, the parliamentarians and the house’s committee on dispatch, which manages the flow of resolutions to the floor, will present a plan to the deputies for picking up the pace.

In a related move, House of Deputies President the Rev. Gay Clark Jennings told the house just after Krislock finished his remarks that she was limiting committee reports on legislation to three minutes. 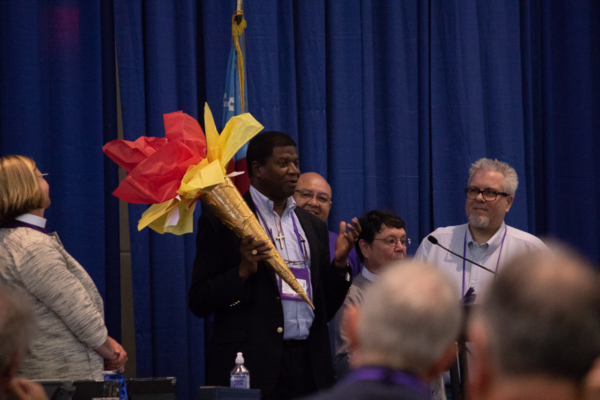 Bishop Eugene Sutton of Maryland receives the “Olympic torch” passed to him by the bishops of Texas on July 12. The Texas bishops presented the torch to the Maryland bishops in recognition that the 80th General Convention will be held in Baltimore in 2021. Photo: Mike Patterson/Episcopal News Service

In her testimony delivered during the House of Bishops’ July 10 legislative session, when bishops voted unanimously to admit the Episcopal Church of Cuba as a diocese, former Presiding Bishop Katharine Jefferts Schori pointed out that if each Episcopalian gave 50 cents, the church could fund the gap in Cuba’s pension plan. Utah Bishop Scott B. Hayashi responded saying he would up it to $1 for every person in his diocese.

Since then, the Rev. Nic Mather, an associate at the Cathedral of St. John the Evangelist in Spokane, Washington, created a GoFundMe page with a goal of raising $5,000 to fund pensions for the Cuban clergy, who’ve forgone both institutional and governmental pensions to serve the church.

You can donate to the fund here.

Episcopal bishops, meeting during the 79th General Convention, approved a resolution that would lead to the creation of a task force to examine the theology money in the Episcopal Church. Resolution A061 directs the presiding bishop and president of the House of Deputies to form the Task Force on the Church’s Theology of Money and report its findings and recommendations in three years to the 80th General Convention.

The task force would use “scripture, approved liturgical resources, other theological texts and previous actions of General Convention to summarize the ways in which the Episcopal Church understands the theology of money and financial resources in the way we give, invest and spend.”

The resolution directs the task force to examine elements of responsible investing that are consistent with the church’s faith and mission, including applying ethical guidelines in investment selection and management, shareholder activism and investing for responsible social and environmental outcomes as well as financial return.

Both houses of the 79th General Convention met in rare evening-into-night sessions on July 11. With 501 resolutions pending at one point, the presiding officers decided that bishops and deputies had some work to do.

The Episcopal Church knows how to light up the night: parliamentary and legislative work in both Houses until 9:30 p.m. #gcafterdark

The Rev. Gay Clark Jennings, president of the House of Deputies, announced at the start of that house’s session that there was a hashtag for the two hours ahead: #GCAfterDark.

Deputies then spent the first 30 minutes not passing any resolutions.

They eventually got down to business and passed six resolutions.

Most of the resolutions were accompanied by impassioned, if short, pleas for passage.

The after-dark sessions apparently disturbed the resident and visiting pigeons in the deputies’ hall.

However, General Convention Pigeon was OK with it all.

Loyalties to the pigeons’ status as Beloved of Deputies were challenged at one point.

Upstairs in the House of Bishops, the word “punchy” could be heard being murmured around the floor.

As the bishops reached the end of their legislative calendar of a handful of resolutions about 9 p.m. and were getting ready for closing prayers, there was a lightness and palpable relief in the room.

Meanwhile, back downstairs in deputies, tweeting was going strong.

The Diocese of Oklahoma decided that it could at least achieve some efficiency in meal planning by visiting the famous and increasingly craved output from nearby Voodoo Donuts.