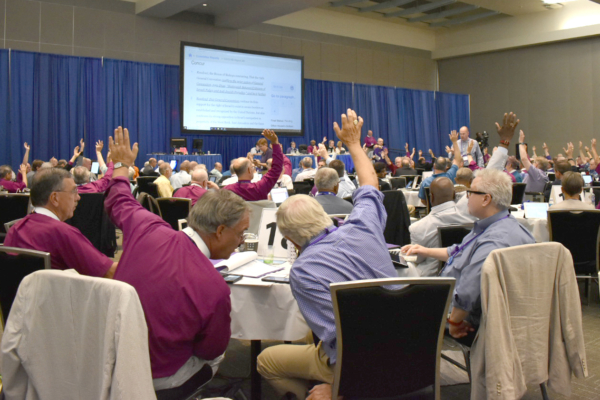 [Episcopal News Service – Austin, Texas] The House of Bishops, by a large majority, voted down a measure overwhelmingly favored by the House of Deputies that would have sought to end the church’s financial complicity in the Israeli occupation of Palestinian territories, putting to rest for at least another three years one of the church’s most divisive issues.

Other resolutions relating to Israel and Palestine are still in play at the 79th General Convention and may still win passage. Northern California Bishop Barry Beisner, chair of the Social Justice and International Policy Committee, told Episcopal News Service after the bishops’ July 11 vote against Resolution D019 that the remaining resolutions, though perhaps “no less emotional,” are not quite as “complicated.”

Bishops and deputies on both sides of the issue spoke strongly about Resolution D019 this week, but the votes of the two houses ended with opposite results. The deputies approved the resolution with 74 percent in favor, while the bishops’ vote was 48-78, or 62 percent against the resolution.

Resolution D019 would have asked Executive Council, based on 70 years of church policy toward the Middle East conflict, to research and develop a plan by 2019 for a “human rights investment screen,” which critics described as a dangerous divestment from Israel.

“Divestment will not move us one inch forward in the peace process. It will not bring an end to the occupation. It will not lead us to the solution that we all yearn for, which is two states living side by side in peace within secure borders,” said retired Bishop Ed Little of the Diocese of Northern Indiana, who was one of six bishops to speak against the resolution before the vote.

The resolution’s defeat served as a sudden punctuation to a week of open and often passionate debate on a range of issues related to Israel’s treatment of Palestinians. General Convention is considering how the Episcopal Church should respond to what many see as an escalating humanitarian crisis in the region.

Nearly 50 people testified at a committee hearing on those issues held July 6 in the JW Marriott, part of an expedited process recommended by Presiding Bishop Michael Curry and the Rev. Gay Clark Jennings, House of Deputies president. Their recommendations, including the designation of the House of Deputies as the house of initial action, were intended to ensure full, open and productive discussions after complaints about the process for considering Israel-Palestine resolutions at the 2015 General Convention, when the bishops’ vote against a similar measure meant it never got to the deputies for consideration.

General Convention has voted in support of Middle East peace for decades. This year, the international policy committee submitted D019 for a special order of business in the House of Deputies, recognizing it as the most controversial of more than a dozen related resolutions, including some assigned to the Stewardship & Socially Responsible Investing Committee. The special order meant that discussion on the floor July 9 could not be sidelined by procedural hurdles.

“Let this be finally the convention where we say we will no longer allow our financial resources to enable this brutal occupation,” said Brian Grieves, the resolution’s proposer and a deputy from Hawaii, before the deputies voted, 619-214, to send D019 to the bishops.

But the contrast in tone two days later was evident immediately in the House of Bishops.

Little warned that divestment would do “irreparable damage” to the church’s relations with Israel. Bishop J. Scott Barker of Nebraska acknowledged “the unendurable weight shouldered by the Palestinians who live under Israeli occupation” but also warned of persistent, if not widespread, claims in the occupied territories that Israel has no right to exist.

“I would be all for proactive investment in the Palestinian territories … but actions to boycott, divest from or sanction Israel alone as the antagonist in this story no longer makes sense to me,” Barker said. “That for me is an oversimplification of a complex reality.”

Los Angeles Bishop John Taylor joined them in opposing the resolution, saying although the Israeli occupation “is impossible to defend,” the two alternatives, annexation or withdrawal, would be “catastrophic.”

“Better to step up our constructive engagement throughout the region, doing everything we can as a church to build up economic, social and political infrastructure in Palestine for the sake of the Palestinian people,” Taylor said.

Several bishops spoke in favor of the resolution, including Bishop Marc Andrus of the Diocese of California. He said many of the arguments against divestment “are based on a false equivalency.”

“All human lives are infinitely precious,” Andrus said, and too many lives have been lost on both sides of the Israeli-Palestinian conflict. But he said there is no denying the decades-old conflict’s deadly toll has disproportionately affected Palestinians, by a factor of three to one. He called passage of tougher measures “a long time coming.”

Bishop Suffragan Gayle Harris of Massachusetts and Newark Bishop Mark Beckwith spoke in favor of the resolution, focusing on the Episcopal Church’s investments in companies that support or provide infrastructure assistance for the occupation, such as construction equipment manufacturer Caterpillar and telecommunications company Motorola. Both companies already are targets of shareholder advocacy by the church’s Executive Council.

Resolution D019 “calls us, as I read it, to investigate who is profiting from the tragedy in the Middle East,” Beckwith said.

“It directs us to look at how we are participating, both silently and financially, into a system that degrades people,” Harris said. “This is our act, our conscience, our sense of justice. … Our sense of who we are as a people of Christ is tied with this resolution.”

But South Dakota Bishop John Tarrant, in opposing the resolution, took issue with the process, which he still found lacking.

“It must have been a dream, but I thought I’d read somewhere that we were going to have open conversation about this very complex issue, with people speaking from both sides that were knowledgeable,” Tarrant said. “I think that this complex issue needs a greater forum than a quick legislative session.”

During a break in the legislative session after the vote, Beisner told ENS he thought those who described the resolution derisively as “BDS,” or boycott, divest and sanction, “were getting ahead of things.”

“I certainly agree that it deserves a more spacious and careful consideration than our cramped legislative process allows,” Beisner said. “Of course, one of the hopes was that Executive Council would be the place where that might happen. That was the point of D019.”

The other resolutions making their way through the House of Deputies relate to treatment of Palestinian children, Israel’s use of lethal force against unarmed Palestinians, the system of apartheid between Israelis and Palestinians, Israeli laws that deprive Palestinians of civil rights, and the ability of U.S. companies to boycott Israel in protest of its occupation of the Palestinian territories.

Those resolutions were recommended by committee members from both the House of Bishops and House of Deputies, though it remains to be seen which, if any, clear both houses. The deputies could vote later July 11 if the resolutions aren’t delayed by other matters.