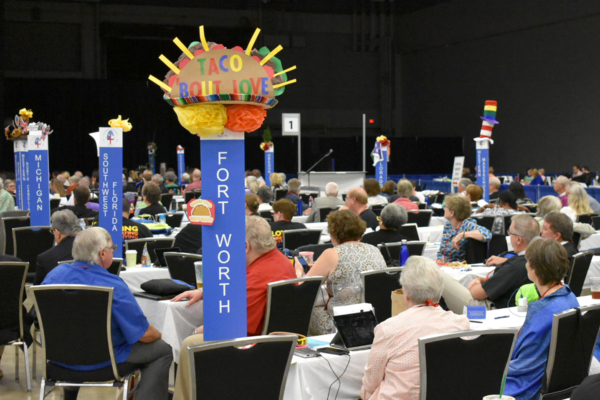 [Episcopal News Service – Austin, Texas] The business of the House of Deputies is all business – legislative calendars, substitute resolutions, points of information, calling the question, motions to approve, etc. – but that doesn’t mean the deputies can’t have a little fun, too.

From the nonstop General Convention Pigeon references to the World Cup flair shown by the Convocation of Episcopal Churches in Europe, it’s clear the work of the church doesn’t require deputies to check their personalities at the convention door.

The most obvious examples are found at the tables of nearly every deputation, where the posts – known as “standards” – that identify each diocese by name are garnished with a wide variety of souvenirs, signs, sports memorabilia and other decorations signifying some aspect of the local diocesan culture, from the foam cheesehead atop the Diocese of Fond du Lac’s standard to the Diocese of Texas’ cowboy hat.

We have no intention of pitting one diocese against another in a bitter competition for top topper title, especially since each diocese’s choice of topper is undoubtedly a loving one. So the following top 10 – admittedly an entirely subjective list – is merely meant to highlight some of our favorites, in no particular order.

(Let us know your favorites in the comments after checking out the photos in our gallery.) 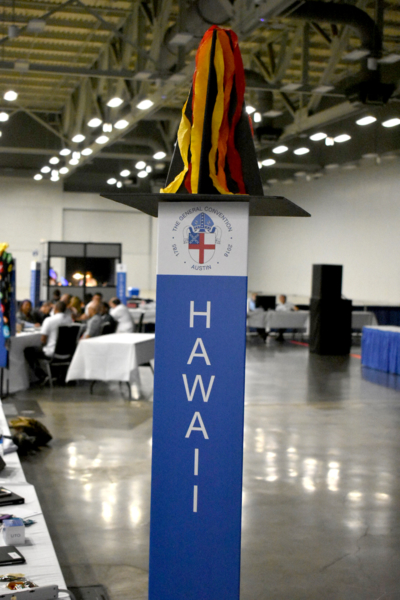 Hawaii could have gone in several directions with its topper, but the choice of a volcano seems perfect, both to represent this chain of volcanic islands and in recognition of the devastation caused this year by the eruption of Kilauea on the Big Island. 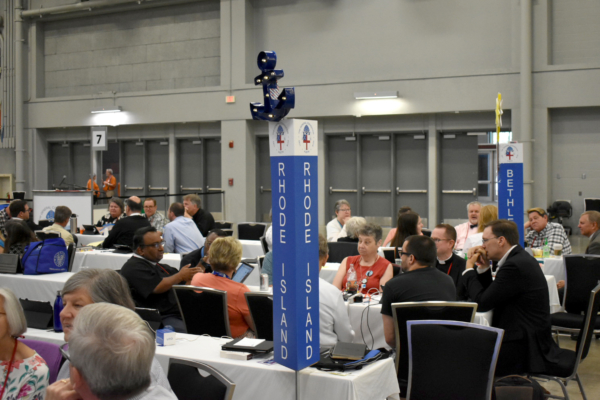 For a diocese with a close connection to the ocean, the sailor’s anchor is an appropriate symbol, though this topper gets most of its points for including illuminated lights. 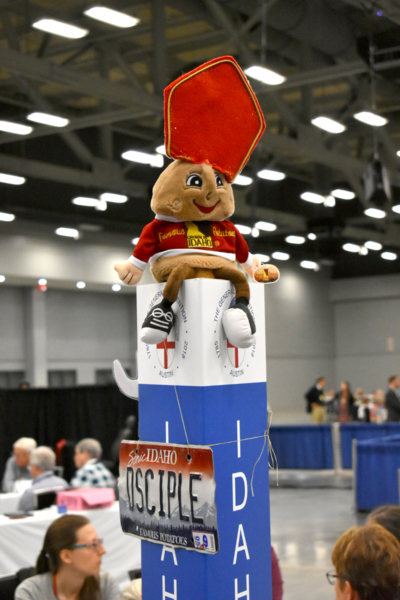 Idaho easily wins the “Put a Bishop Hat on a Local Trademark” sweepstakes, with its Rt. Rev. Potato, and it goes the extra mile by draping a “DSCIPLE” license plate over its topper.

Los Angeles, too, could have tried any number of approaches to representing its diverse local culture and population, but it stuck with a fun prop, a filmmaking clapperboard that casts the House of Deputies as the star of this General Convention movie. Is “director” Jennings ready for the next take? 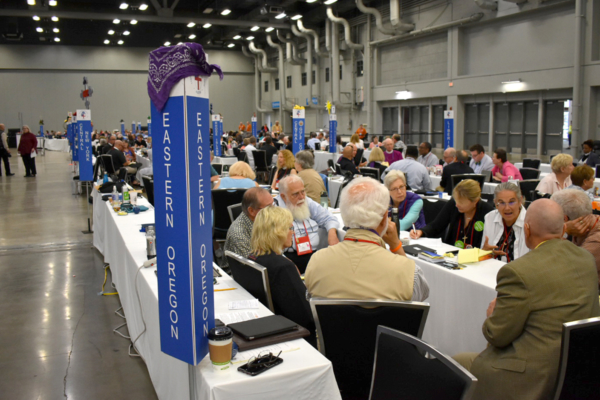 The simplicity award goes to Eastern Oregon, for its purple bandana. Sometimes less is more. (Also, hats off to runner-up Diocese of Rochester, for its Genesee Beer trucker’s hat.) 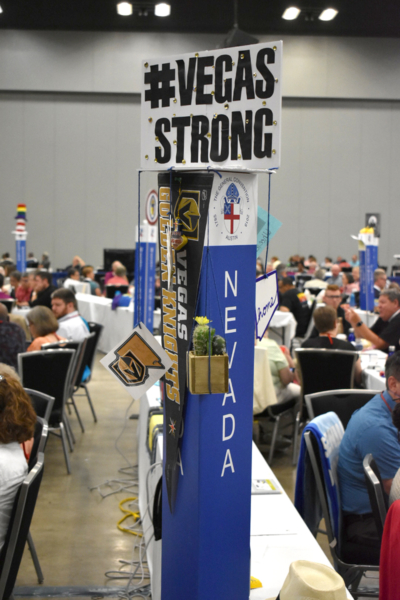 There’s a lot going on here, and who would have doubted the Episcopalians who claim Las Vegas as their own would go all out. The Golden Knights pennant, the royal flush and the #VegasStrong sign make this an odds-on favorite.

Dioceses of Missouri and Newark (tie) 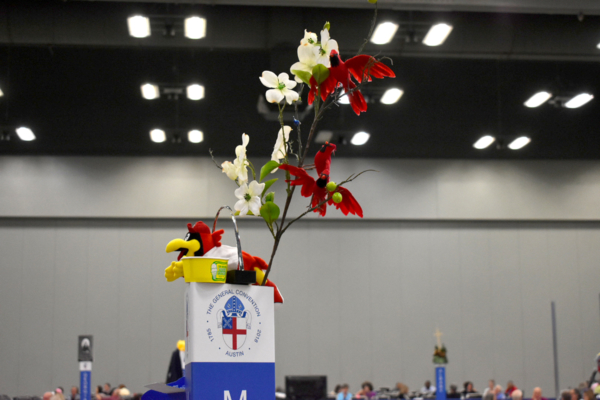 This is a tie in the “Best Nature Scene” award, with Missouri placing cardinals on life-like flowers and Newark choosing goldfinches. Missouri might get the edge, if only for sneaking in an empty Ted Drewes Frozen Custard cup.

Diocese of Fort Worth

Not to diminish the work of convention host, Diocese of Texas, but its neighbor Fort Worth took a delicious theme – tacos – and ran with it, with a bit of Episcopal seasoning. “Taco ’bout Love,” says one sign, while another says, “Wanna taco ’bout Jesus.” Yes and yes. 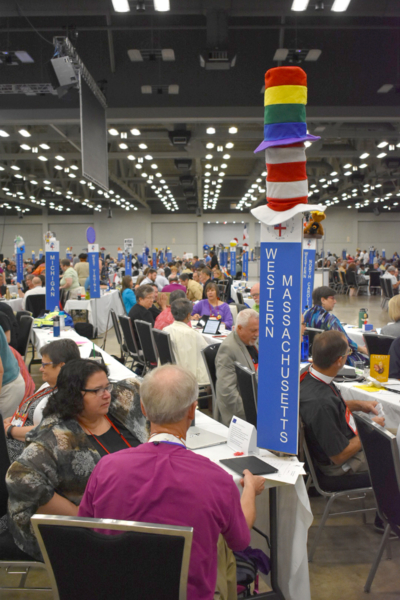 This topper easily wins the “Most Seussical” award. For those of you still scratching your head, Theodor Geisel, aka Dr. Seuss, was from Springfield, Massachusetts. 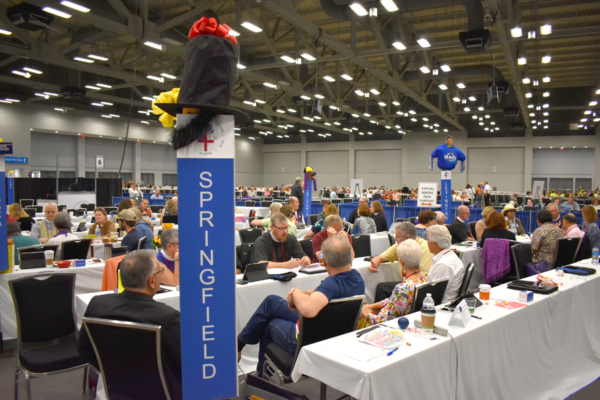 Finally, if there was one diocese that had an obvious choice, it was Springfield, and that choice was Abraham Lincoln. So you could say this topper had a rather low degree of difficulty, but the diocese didn’t waver and aced the execution, with a top hat and beard that has this standard looking rather presidential. “Four score and seven more resolutions to go…”