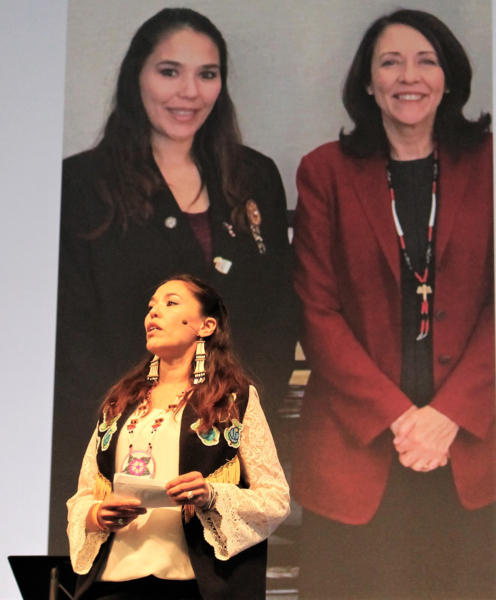 Bernadette Demientieff, Alaska Native Gwich’in from Fort Yukon, Alaska, offers an emotional witness to the destruction of sacred lands and waters of the Arctic National Wildlife Refuge during the third and final TEConversation, Care of Creation, on July 10, at the 79th General Convention, Austin, Texas. Photo: Sharon Tillman/Episcopal News Service

[Episcopal News Service – Austin, Texas] When Native Alaskan Bernadette Demientieff took the stage in front of a joint session of the 79th General Convention assembled for the final TEConversation on July 10, she didn’t so much give a presentation, as scheduled. Instead, she testified in a trembling voice to the destruction of the Gwich’in way of life.

The Gwich’in people’s existence has for centuries depended on the Porcupine caribou, whose calving ground lies within the Arctic National Wildlife Refuge’s coastal plain. To the Gwich’in, the refuge is sacred; to energy companies the Arctic National Wildlife Refuge, particularly its 1.5-million acre coastal plain, is a potential oil and natural gas bonanza. This conflict has fueled for more than 30 years a contentious debate over whether this coastal plain should be opened to oil drilling or kept as unspoiled habitat.

In December 2017, the Trump administration and congressional Republicans opened the refuge to oil exploration. Earlier this year in April, it took its first step toward allowing drilling.

Even in times of food shortage and starvation, the Gwich’in haven’t gone into the coastal plain, which they consider “the sacred place where life begins,” said Demientieff, who after high school drifted away from her Gwich’in identity only to recover it later in life and use her voice to speak for future generations and the animals that cannot speak for themselves. 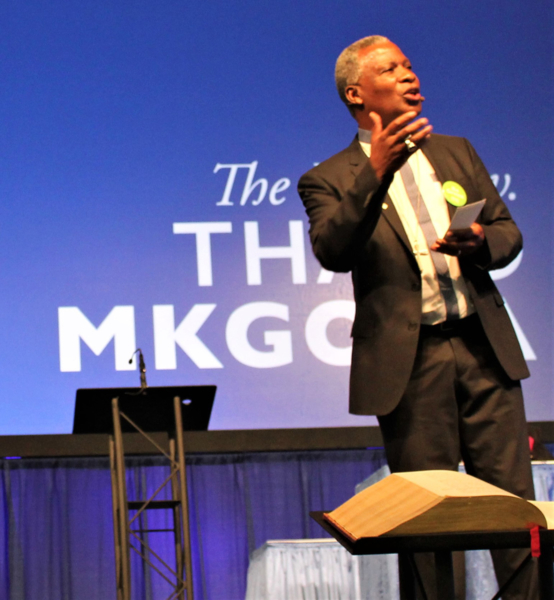 Archbishop of Cape Town and Metropolitan of the Anglican Church of Southern Africa, the Most Rev. Thabo Makgoba, speaks to his people’s challenges to survive climate change in sub-Saharan Africa during the Care of Creation TEConversation on July 10 at the 79th General Convention, Austin, Texas. Photo: Sharon Tillman/Episcopal News Service

Bishops and deputies also heard from Cape Town Archbishop Thabo Cecil Makgoba, who reminded them that in Genesis 2:15, “God takes a woman and a man and he puts them in trust … to see that creation is not exploited but that it flourishes.”

Unfortunately, that’s not what has happened, and the poor and the marginalized, especially those living in Latin America, Southeast Asia and sub-Saharan Africa, are paying the highest price.

In today’s world, where water is scarce or taken for granted as something that flows from the tap and is sold as a commodity, “900 million people do not have access to the lifesaving 20 liters of water a day because the needs of the poorest of the poor are not taken into consideration,” he said.

The final speaker, the Rev. Stephanie McDyre Johnson, talked about growing up in the Hudson River Valley, where in the 1970s rivers were catching fire and fish were dying.

As a fourth-grader, she went on folk singer and environmental activist Pete Seeger’s Clearwater Sloop, and her teacher said not to put her hands in the water because it was too polluted and too dirty.

That was before the federal government passed laws, including the Clean Water Act, to protect human health and the environment. 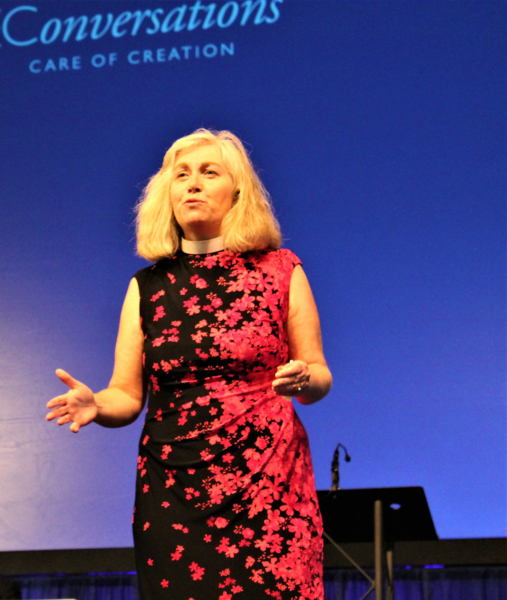 The Rev. Stephanie McDyre Johnson blends her passion for the environment with her ministry as a priest to serve as the co-chair of the Episcopal Church’s Advisory Council on the Care of Creation. Johnson speaks at the third and final TEConversation, Care of Creation, July 10, at the 79th General Convention, Austin, Texas. Photo: Sharon Tillman/Episcopal News Service

Years later, Johnson took her own family to the region’s annual Clearwater Festival, and fish had returned to the Hudson River.

“This is the symbol of hope that I need,” she said. “The symbol of resurrection that God calls us to.”

The environmental laws enacted in the 1970s reversed a lot the damage caused by industry; however, today those laws are under attack. During this General Convention, the church is considering legislation to strengthen its stance on creation care and environmental stewardship.