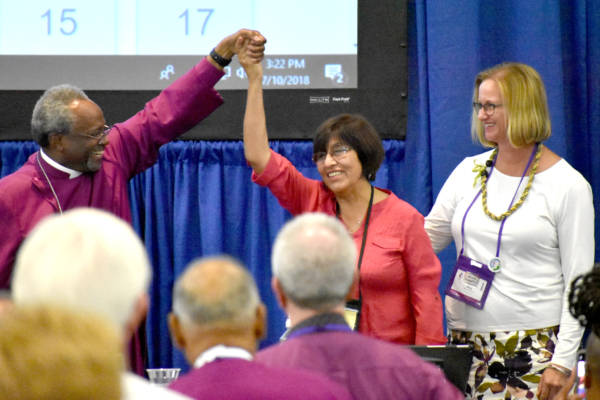 “I feel the breath of the Holy Spirit. Thank you, everyone, for the support right now, but really for the support all these years,” Cuba Bishop Griselda Delgado del Carpio said in Spanish through an interpreter. She took a moment to remember generations past who’d longed for reunification, “those who’d suffered but always hoped we’d return to the church.”

Delgado received a standing ovation, and many hugs were shared as Presiding Bishop Michael Curry asked her to take her seat at table No. 7.

Reunification was a long time coming. In response to the geopolitics of the time, the House of Bishops in 1966 voted unilaterally to separate from the Episcopal Church in Cuba. 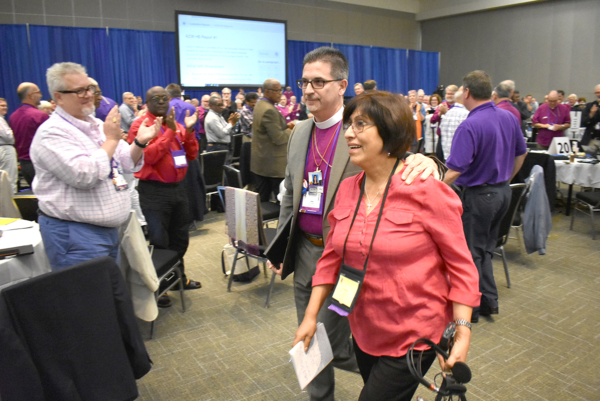 Western North Carolina Bishop José McLoughlin escorts Cuba Bishop Griselda Delgado del Carpio to the front of the House of Bishops after the vote to readmit the Diocese of Cuba to the Episcopal Church. Photo: David Paulsen/Episcopal News Service

The House of Bishops “stabbed Cuba in the heart, and it refused to die,” said retired Southeast Florida Bishop Leo Frade, a Cuban who was 23 years old when the house voted to expel Cuba.

“House of Deputies did nothing, the House of Bishops acted. … It was an unconstitutional action by a House of Bishops that had no authority to kick us out,” said a tearful Frade. “As Cubans, Cubans refuse to die. The reality is that the Church of Cuba is still alive, and it belongs here.”

At the start of the 79th General Convention, the Episcopal Church in Cuba Committee struggled with constitutional and canonical questions regarding whether convention could act now to admit Cuba, or if it would require a constitutional change be made over two consecutive conventions.

In the end, convention acted as it did similarly in 2003 when it readmitted the Diocese of Puerto Rico into the Episcopal Church. The Diocese of Puerto Rico had been since 1979 an extraprovincial diocese under Province IX’s authority. In the 1970s, it was expected that Puerto Rico, Cuba and other dioceses in the Caribbean would form their own province, though that never came to pass.

Formerly a missionary district, the Episcopal Church of Cuba has functioned as an autonomous diocese of the Anglican Communion under the authority of the Metropolitan Council of Cuba since it separated from the U.S.-based Episcopal Church in 1967.

New Jersey Bishop William “Chip” Stokes, bishop chair of the Episcopal Church in Cuba Committee, impressed a sense of urgency on bishops to adopt Resolution A238 as amended.

“Cuba’s government is in a time less restrictive toward churches,” he said, adding that U.S. policies are unpredictable.

A238 lays out the terms for reunification; it now moves to the House of Deputies.

In 1961, Episcopal schools in Cuba had been closed and appropriated, and many clergy and their families were displaced. Some remained in Cuba; some either returned or immigrated to the United States. Some clergy who remained in Cuba were imprisoned, executed or disappeared. Church buildings were closed and left to deteriorate. The church was polarized politically, and its clergy and lay leaders suffered. But the church continued in the living rooms of the grandmothers, who held prayer services and Bible studies in their homes. Through them is transmitted a story of pain, and of faith.