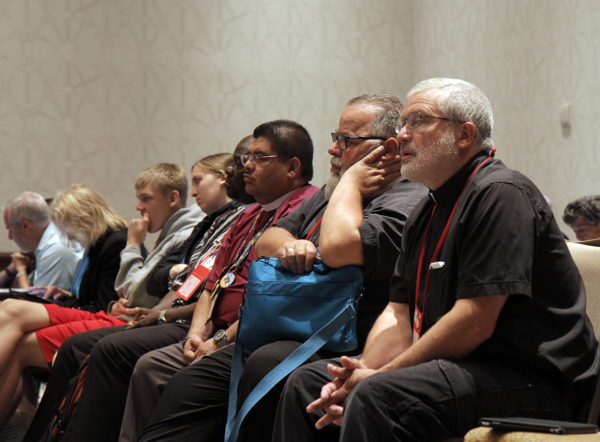 The committee sent Resolution A238, which lays out the terms for reunification, to the House of Deputies legislative calendar. It has not yet been scheduled for the floor.

Previously, the committee struggled with constitutional and canonical questions regarding whether or not convention had the power to act to bring in an existing Anglican Communion diocese and a bishop. It was during a July 7 hearing that it decided to write A238, this time calling for the 79th General Convention to admit the Episcopal Diocese of Cuba to the Episcopal Church during this convention.

The resolution recognizes that Article V, Section 1 of the constitution “does not expressly provide for creation of a new diocese from an existing Anglican Communion diocese, neither does it expressly limit or forbid General Convention from doing so.”

The committee based its reasoning in part on Resolution 1976-D004, an amendment to the White & Dykman Annotated Constitution and Canons of the Episcopal Church, which established that “all power is in the General Convention which the constitution itself does not limit.”

The resolution calls for $400,000 for support of the Cuban church’s ongoing mission and an interim body to accompany the two churches through their transition to re-unification and $50,000 to fund that work.

A heavy early morning rainstorm did not prevent people from showing up for the final open hearing of the Episcopal Church in Cuba Committee.

The Very Rev. Jose Angel Gutierrez, dean of Trinity Cathedral in Havana, expressed gratitude for the committee’s support of Cuban clergy, who, if the resolution passes, will be eligible to participate in the International Clergy Pension Plan administered by the Church Pension Fund.

He also said, in Spanish through an interpreter, that by attending General Convention and the committee meetings, he had learned a lot of about democracy and the church’s role in society. And he said it’s also become clear that reason can drown out the message of love, referring to the debate over the constitution and canons.

“I understand that we need laws and norms for the church to function, but not at the expense of love,” he said.

In testimony and later in a conversation with Episcopal News Service, the Rev. Roberto Maldonado, Latino missioner in the Diocese of Oregon and an alternate deputy to convention, said it’s important to know that it wasn’t Cuba’s decision to separate from the Episcopal Church in the 1960s. By readmitting the Cuban church, the Episcopal Church can set an example for other mainline denominations, such as United Methodists and Presbyterians, who also separated, he said.

The resolution also laments the action taken to separate the Episcopal Church from the Cuban church in 1966 by the House of Bishops in response to the geopolitics of the time.

In 1961, Episcopal schools in Cuba had been closed and appropriated, and many clergy and their families were displaced. Some remained in Cuba; some either returned or immigrated to the United States. Some clergy who remained in Cuba were imprisoned, executed, or disappeared. Church buildings were closed and left to deteriorate. The church was polarized politically, and its clergy and lay leaders suffered. But the church continued in the living rooms of the grandmothers, who held prayer services and Bible studies in their homes. Through them is transmitted a story of pain, and of faith.