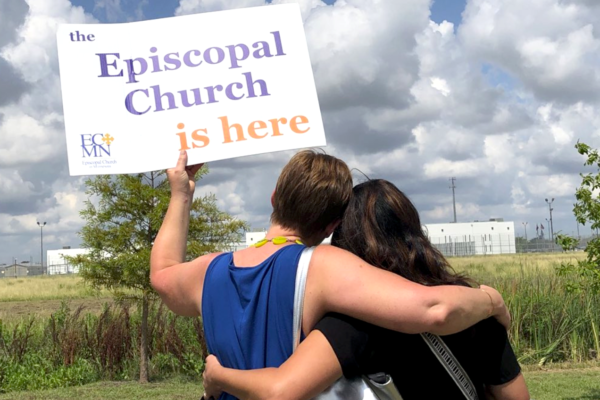 The Rev. Devon Anderson, deputy from Minnesota, and Julia Ayala Harris, deputy from Oklahoma, stand outside the Hutto detention center in Taylor, Texas, before a prayer service July 8. Photo: House of Deputies News

[Episcopal News Service – Austin, Texas] And then there were three – three immigration-related resolutions from the Social Justice and United States Policy Committee, including two that were taken off consent calendars and will be open for discussion in the House of Bishops and House of Deputies at the 79th General Convention.

The three resolutions combine parts of several resolutions on immigration into broad, forceful statements on the issues of separation of families in immigrant detention, the sanctuary church movement, and the dignity of immigrants in the face of federal policies that, deputies and bishops say, go against the Episcopal Church’s Christian values.

In some cases, the resolutions deliberately point backward to resolutions passed by previous General Conventions, both to underscore the church’s ongoing engagement with these issues and to highlight recent government policies that have given Episcopalians a new sense of urgency.

“Much of the work we were asked to do was essentially reaffirming the work of past General Conventions,” Daniel Valdez, a deputy from the Diocese of Los Angeles and committee member, said July 9 during deliberations on the resolutions. “Sadly, our voices haven’t been loud enough where a change has been made.”

The committee’s votes to move these resolutions to full legislative consideration comes a day after more than 1,000 bishops, deputies and other Episcopalians traveled by busload and carload to a prayer vigil held outside an immigrant detention facility a little more than a half-hour from Austin. The vigil on July 8 was organized to engage in prayerful witness to the plight of immigrant parents and children who have been separated from each other after being detained under the Trump administration’s “zero tolerance” immigration policy.

The administration’s decision to separate children from their parents in detention caused a national uproar in the spring, prompting President Donald Trump to issue an executive order to keep families together when they are arrested on the border, though the status of those families in detention remains an ongoing debate.

Resolution A178 specifically condemns such treatment of women and children in unambiguous language.

“The U.S. government’s intensification of and implementation of punitive immigration policies and practices, such as the detention and separation of children from parents and the practice of housing children in military bases, is inhumane and unjust, and only serves to traumatize the vulnerable, especially women and children,” the resolution says before urging the Office of Government Relations and all Episcopalians to advocate for those families.

The Rev. Brian Chace, a deputy from Eastern Michigan and member of the domestic policy committee, argued for moving the resolution forward without amendment, citing the acute crisis, the need to stand with the children and the resolution’s prominent proposer – the Rev. Gay Clark Jennings, House of Deputies president.

The committee agreed and voted in favor of A178 without amendment.

A trickier discussion followed on resolutions relating to providing sanctuary to immigrants. Resolution C009, “Becoming a Sanctuary Church,” was amended to incorporate elements of the related Resolution C018. Concern was raised about legal issues congregations might face under the banner of “sanctuary.”

Bishop Suffragan Anne Hodges-Copple of the Diocese of North Carolina, chair of the bishops’ committee, reassured the committee that the goal of the resolution is to foster within the church a greater spirit of welcome to immigrants.

“In some parts, ‘sanctuary’ gets equated with harboring,” Hodges-Copple said, and some churches will choose to provide or will continue to provide a physical sanctuary for immigrants facing deportation. But she also hoped the church will see the broader sense of sanctuary and reach out to immigrants in ways that are appropriate for each congregation.

That resolution and the third immigration resolution to clear the committee were added to the legislative calendar, meaning the two houses won’t be able to approve them quickly as part of the daily lists of consent resolutions.

“Sorry, Gay,” Jane Freeman, a deputy from Ohio, said in a reference to Jennings, who was not present at the committee meeting but had told the House of Deputies a day earlier “the consent calendar is our friend.” 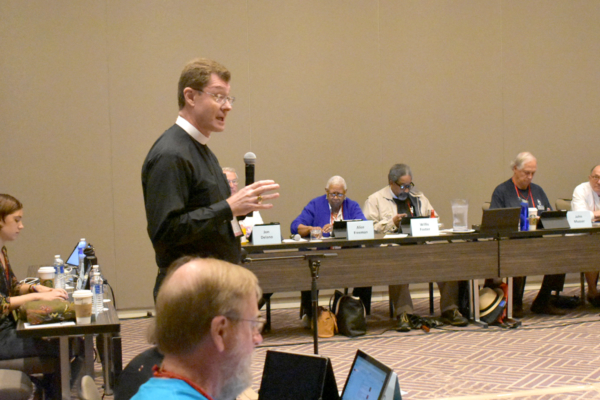 The resolution Freeman was discussing, C033 on respecting the dignity of immigrants, now incorporates elements of C001, immigration enforcement; C002, the DREAM Act; D001, residency status of Haitians; and D015, keeping families together.

The committee also bulked up the amended resolution with additional references to past actions taken by General Convention.

“What we wanted to be sure was there was a historical precedent going back to 2009 dealing with these immigration issues,” Freeman said. A 2009 resolution, for example, called for comprehensive immigration reform, a goal that Congress appears no closer to achieving nine years later.

The resolutions are expected to go to the House of Bishops first. The timing is not yet clear.

Resolution C033, in particular, generated quite a bit of testimony at an open hearing on immigration July 7, possibly because it covers such a broad swath of the issue while also identifying specific avenues for advocacy.

“I call upon my church, our church, to do what is right for immigrants,” the Rev. Roberto Maldonado, a priest and deputy from the Diocese of Oregon, testified at the hearing. Maldonado was one of about 25 people to speak about the various immigration resolutions.

“We are grateful for the General Convention’s longstanding commitment to respecting the dignity and humanity of all people, including immigrants and refugees,” Rebecca Linder Blachly, director of the Office of Government Relations, said in a email statement to ENS. “The resolutions under consideration reflect the importance and prominence of issues relating to migration. OGR has continued to prioritize this issue – from holding the Vigil for Family Unity to visiting a detention center last July to working closely with Episcopal Migration Ministries on refugee resettlement.”