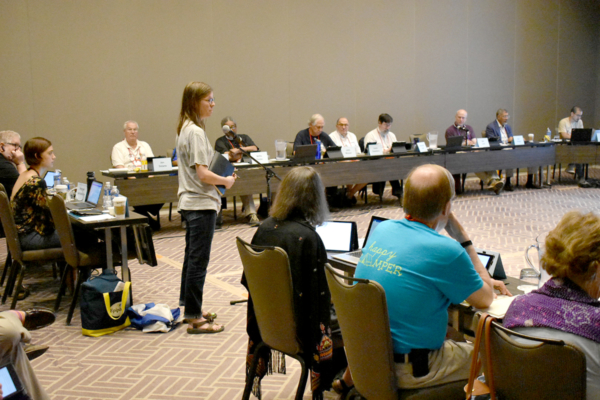 [Episcopal News Service – Austin, Texas] Arkansas’ decision to schedule eight executions in 10 days last year drew intense national scrutiny, sparked a sudden re-examination of the death penalty and served as a catalyst to a resolution before the 79th General Convention seeking to build on the Episcopal Church’s longtime advocacy on the issue.

Resolution D077 was submitted by the Rev. Bob Davidson, a deputy from Colorado and national chair of the Episcopal Peace Fellowship. It reaffirms the church’s position in favor of abolishing the death penalty, calls for all death row inmates’ sentences to be reduced, orders letters to that effect be sent to all governors of states where the death penalty is legal and enlists bishops in those states to take up greater advocacy.

Davidson, a member of the Social Justice and United States Policy Committee, testified in favor of his resolution at the committee’s open hearing on July 9. He noted the Episcopal Church first took a stand in favor of abolishing the death penalty in 1958.

“The Episcopal Peace Fellowship has continued to maintain this as one of its strongest priorities, carrying the banner of the dignity and sanctity of life for all persons,” Davidson said. “This resolution gives teeth” to past General Convention resolutions.

Davidson, in an interview with Episcopal News Service after the meeting, explained how the resolution developed in reaction to the Arkansas executions of April 2017. Episcopal Peace Fellowship was part of a network of faith-based organizations and activists at the local level that mobilized prayer vigils, social media campaigns and demonstrations in response to those executions.

Only four of the eight scheduled executions were carried out, though the explanation to Resolution D077 notes the death penalty remains legal in 31 states and more than 3,000 inmates are awaiting execution in the United States.

Davidson told ENS this issue overlaps with the Episcopal Church’s work on racial reconciliation, given the disproportionate number of prisoners who are black men.

“There’s no more glaring symbol of racism in our country than to look on death row and just look at the executions of black men in our country,” Davidson said.

The Rev. Allison Liles, executive director of Episcopal Peace Fellowship, also spoke in favor of the resolution at the open hearing on July 9, emphasizing cases of death row exonerations and singling out General Convention’s host state of Texas. The state has executed 552 people since the death penalty was reinstated by the Supreme Court in 1976, far more than any other state, according to the Death Penalty Information Center.

Liles also noted how this resolution goes beyond prior resolutions on the issue to direct the secretary of General Convention to send letters to the governors of death penalty states specifically seeking sentence reductions of those condemned to death or case reviews for possible exonerations.

“We’ve been speaking out against it for 60 years, and now we need to speak on behalf of the people who are living on death row and encourage the governors to commute their sentences to life in prison.”

Marti Hunt, a deputy with the Diocese of New Hampshire, also testified in favor of the resolution.

“We’re calling on governors to step up,” Hunt said. “A lot of them self-identify as Christians, and we want them to recognize that they are responsible for the lives of all the citizens in their jurisdictions.”

Atlanta Bishop Robert Wright, speaking with ENS during a break in the committee meeting, echoed Hunt’s comments about appealing directly to governors’ faith, because a lot of politicians “use their Christianity when it’s convenient politically.” Christianity speaks to the dignity of all humans, including those behind bars, said Wright, a member of the committee who has been active in advocating against the death penalty in Georgia.

“I’m glad that we are remembering our commitment as the Episcopal Church to facilitate the abolition of the death penalty,” Wright said when asked about Resolution D077. “We need people to take that energy that was put into these resolutions and take it back home.”