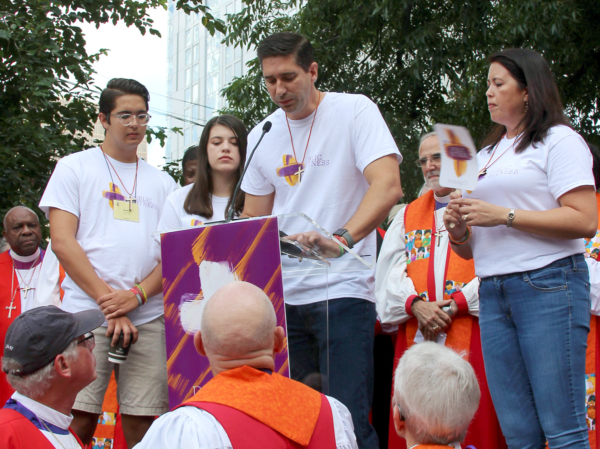 [Episcopal News Service – Austin, Texas] On the gentle slopes of Brush Square Park in downtown Austin and under the canopy of live oak trees, hundreds gathered on July 8 to hear gut-wrenching testimony from Philip and April Schentrup, Episcopalians whose daughter Carmen was one of 17 students and educators killed by a gunman at Marjory Stoneman Douglas High School in Parkland, Florida.

Standing on a stage surrounded by dozens of bishops, the Schentrups shared their grief and emotional journey in the aftermath of their daughter’s murder on Feb. 14, 2018. “I was unable to talk, unable to eat, unable to sleep, barely able to carry on,” Philip Schentrup said as his wife April, son Robert, and daughter Evelyn, stood at his side.

Carmen was shot four times with an AR-15 rifle by Nikolas Cruz, a 19-year-old former student who walked into the school building, killed 16 others and wounded another 17. The Marjory Stoneman Douglas shooting is one of the deadliest school shootings in U.S. history. 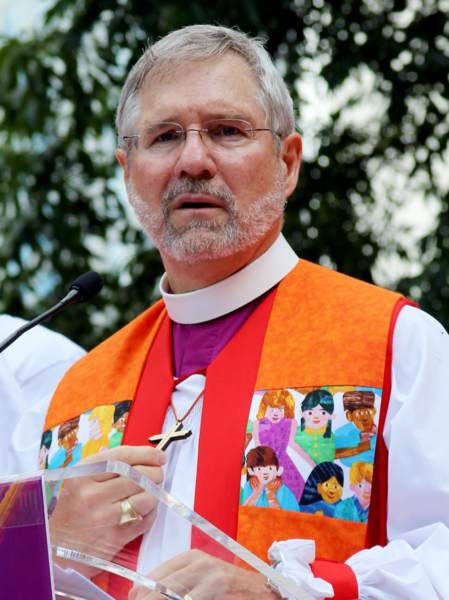 Connecticut Bishop Ian Douglas, one of the organizers of Bishops United Against Gun Violence, shows one of the crosses being distributed to remember the 96 people who die from gun violence every day in the United States. Photo: Melodie Woerman/Episcopal News Service

The Schentrups were invited to speak by Bishops United Against Gun Violence, an organization comprised of 80 Episcopal bishops working to curtail gun violence in the United States. The bishops are in Austin to attend the nearly two-week 79th General Convention, a span during which another 1,000 are expected to suffer from gun violence.

Schentrup led the bishops and spectators through the crisis of faith caused “by the evil that had been wrought on my family.”

“I searched for an answer to this senselessness and questioned everything,” he said, as Presiding Bishop Michael Curry listened in the background. “The world was upside down, and my once boundless sense of hope and happiness was destroyed by a monster.”

Finally, he said, “I had what I believe is a moment of inspired reflection. I understood at that moment that I had it all wrong. God did not intend to inflict deep and lasting damage on my family. God is saddened by Carmen’s murder and all the violence that people are allowed to inflict on one another. God weeps for all of his children.” 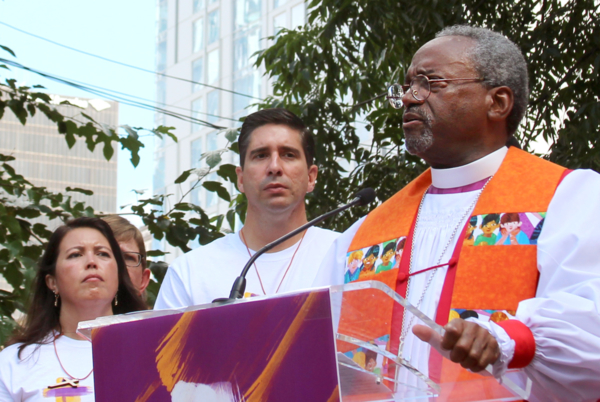 Schentrup said that “God gave us free will, the ability to do good, to be complacent, to inflict harm. God gave us the prophets, his son and the Holy Spirit to show us the way. God wants us all to live into his path of love and kindness. I realized that God’s plan was simple. He gave us the ability to choose to love and to care for one another, and he taught us how to do it.

“Evil and violence happen in this world because we allow it, not because God allows it,” he said. “We suffer violence because we collectively allow it. God is waiting for us to choose to make the world he wants.”

Although a daunting challenge, Schentrup said, “I have hope. I hope in Jesus. I have hope in the hearts and the humanity of people. I have hope that just as people of faith led the fight to overcome segregation, laws that demean people, through love we can end senseless violence.

“I ask everyone here to step up, to choose to make the world a better place and then to act,” he said. 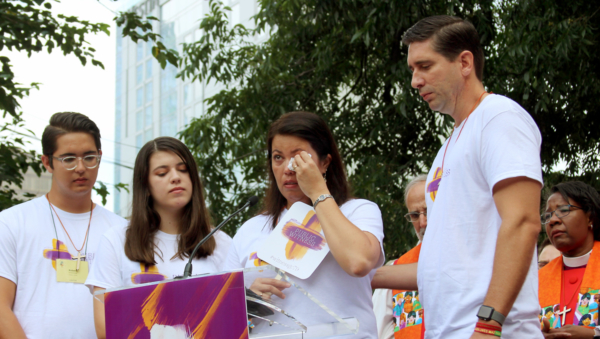 April Schentrup wipes away tears as she speaks about her daughter, Carmen, who was killed at Marjory Stoneman Douglas High School in Parkland, Florida, on Feb. 14. With her are her son Robert, daughter Evelyn, and husband Philip. The family are members of St. Mary Magdalene Episcopal Church in Coral Springs, Florida. Photo: Melodie Woerman/Episcopal News Service

Following her husband’s remarks, April Schentrup told the crowd that as a nation “we have stood by and listened as others have been gunned down in movie theaters, concert venues, places of worship and offices. The truth is in America gun violence happens every day and devastates families.

“We have convinced ourselves that we can’t doing anything to fix it or that it can’t happen to us,” she said. “I’m here to tell you that it can happen.”

She said the nation makes guns too easily accessible and “all too easy for those who shouldn’t have them to own them. Gun manufactures have made weapons and arsenals so destructive than anyone can cause severe devastation within a matter of seconds.”

Schentrup said she is an “advocate for change. Gun violence is a complex issue that will take more than just thoughts and prayers. It will take many working hands and strong voices. Enough is enough.” 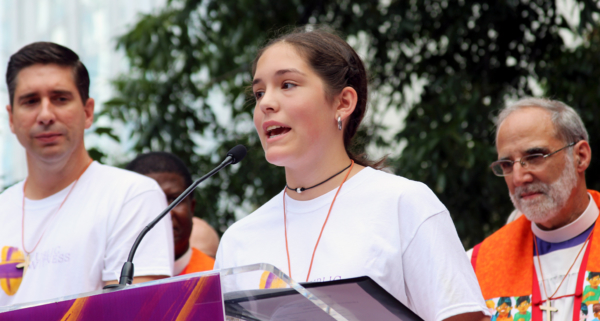 Abigail Zimmerman, a member of St. Alban’s Episcopal Church, Waco, Texas, talks about the school walk-out she helped organize in response to the mass shooting at Marjory Stoneman Douglas High School. Looking on are Philip Schentrup, left, whose daughter was killed in that shooting, and Bishop Mark Beckwith of Newark. Photo: Melodie Woerman/Episcopal News Service

Abigail Zimmerman, a ninth-grader and Episcopalian from Waco, Texas, who co-led a school walkout March 14 in response to the Parkland massacre, told the bishops and audience that young people have “grown up as shooting after shootings after shooting have plagued our country and we have had enough gun violence.”

Since the Dec. 14, 2012, Sandy Hook Elementary School shooting in which 20 children and six adults were killed, she said there have been 239 additional school shootings in which 138 people, mostly children, have died. “But this time, the survivors refused to let it continue,” she said. “They found their voices. We found our voice. I found my voice. I wanted to do something, I had to do something.”

She and her classmates organized the walk-out at her school on March 14 that drew about 300 students and teachers outside to advocate for an end to gun violence. She encourages requiring universal background checks for gun purchases, banning assault rifles, raising the minimum age to purchase a gun and increasing the funding for mental health and counseling programs in schools.

Bishops gather before the start of the public witness against gun violence July 8 in Austin. The event was organized by Bishops United Against Gun Violence. Photo: Lori Korleski Richardson/Episcopal News Service

Although she has had heated arguments with those who oppose her views, Zimmerman vowed, “I know what I am doing will make a difference, and so I persevere. I am determined to make sure that my little brother, my children, my grandchildren will not have to be afraid of going to school.

“I encourage all of you to make change happen,” she said. “Educate yourself, your friends. Vote. Join organizations devoted to common sense gun legislation. Write letters. Do whatever you can to make a difference. Change must happen and it must happen now.”