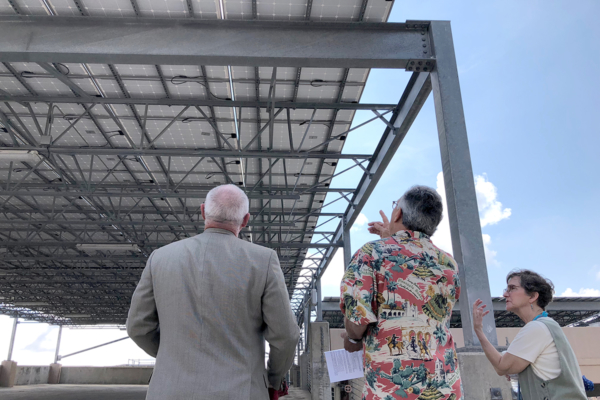 Those attending the 79th General Convention were encouraged July 8 to attend worship services at congregations around Austin, and those who chose to worship at St. David’s Episcopal Church a few blocks north of the Austin Convention Center were offered a bonus: an “eco tour” of the church led by two members of its Environmental Guild.

The 10:15 a.m. tour group was a modest five people, including an Episcopal News Service reporter, but there was nothing small about the efforts underway at this downtown congregation since 2004.

Genaro Lopez, one of the tour guides, said the Environmental Guild’s hope is that congregations churchwide can learn from St. David’s and replicate some of its conservation and environmentally friendly measures, from recycling programs to the centerpiece of the tour, a large solar panel array on top of the church-owned parking structure.

“It’s not that hard to do. It just takes organization and the will to do it,” Lopez said.

The solar array was completed and blessed in 2014 and features 576 solar panels that produce an estimated 200-megawatt hours of electricity a year, or enough to fulfill up to 75 percent of the church’s needs, said fellow tour guide Bob Davis. It cost $400,000, “but over a 25-year life, it will generate two or three times that,” Davis said, and most of the funding came from federal, state and city grants.

Most congregations may see adding a solar panel array as a giant step to take, and it took about 10 years of work for St. David’s Environmental Guild to make it a reality. But like St. David’s, other congregations are encouraged to start with easy environmentally friendly measures and work up to bigger projects, Lopez said.

One of St. David’s first steps was to eliminate the plastic foam cups it had been using for coffee hour. Instead, it created coffee mug “trees,” so the mugs could be used, washed and reused. Here are a few other suggestions from St. David’s:

The resolutions on Israel-Palestine were whittled down to one, D019, for a special order of business that, for now, is scheduled for the morning session of the House of Deputies on July 9.

D019 isn’t the only Middle East resolution still alive. Two other resolutions were approved without discussion July 8 as part of the deputies’ consent calendar – B021 on aid to Palestinian refugees and B003 reaffirming church’s stance that Jerusalem should be a shared holy city and calling the Trump administration’s relocation of the U.S. embassy an “obstacle to peace.”

Six more resolutions on related topics are on the consent calendar for July 10.

But Sarah Lawton, chair of the deputies’ Social Justice and International Policy Committee, said D019 was the resolution most likely to generate some controversy, or at least extended debate. It is titled “Ending Church Complicity in the Occupation” and includes language that would put the Episcopal Church on a path to end investments in companies that profit from Israel’s occupation of Palestinian territories.

The House of Deputies was chosen as the house of initial action for all Israel-Palestine resolutions as part of an expedited process recommended by Presiding Bishop Michael Curry and the Rev. Gay Clark Jennings, House of Deputies president, to ensure these matters receive open, full and productive debate.

House of Deputies passed Resolution A005 on July 8 without debate, sending to the House of Bishops a plan that would spend $5.8 million on church planting in the next triennium.

That amount is $1 million less than the resolution initially called for, but the Rev. Frank Logue, chair of the deputies’ Evangelism and Church Planting Committee said the approved total is “an amount key volunteers and the program staff feel will carry on current work well in the coming triennium.”

Another evangelism resolution, A006, was rejected by the committee. The resolution sought to collect additional demographic data on church leaders involved in church planting and ministry development as a way to encourage those ministries to greater reflect the communities they serve. Concerns were raised about how the data might be used in determining funding and whether the data’s benefits would merit the extra work.

The 79th General Convention may well be breaking a record. A total of 443 resolutions have been filed for the July 5-13 session. The Rev. Gay Clark Jennings, president of the House of Deputies, told the house at the beginning of the July 8 legislative session that 417 resolutions are “incomplete,” meaning that the house has not acted on them.

“It may be a record-breaking number,” she said. The house then approved a 66-resolution consent calendar, boosting the completed percentage to 21 percent.

“The consent calendar is your friend,” Jennings told the deputies. “Repeat that with me.”

Telling the deputies not to panic, Jennings still urge them to streamline their debate. She urged the deputies to not rise to ask her a parliamentary inquiry or other process questions until they had tried to get their question answered by a senior deputy or a designated “parliamentary resource deputy,” whom she asked to stand. 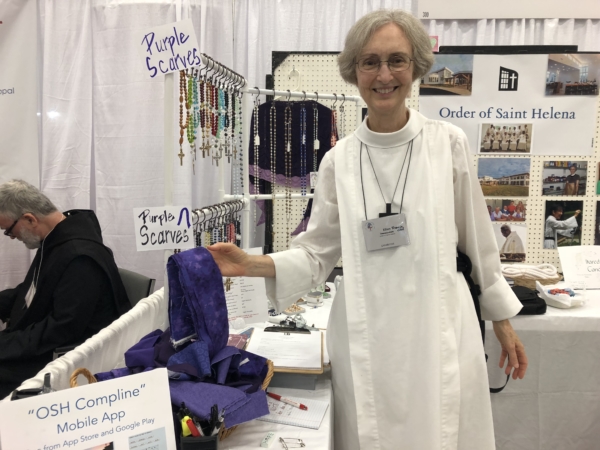 Sister Ellen Francis, OSH, displays the purple scarves being handed out at the Order of St. Helena booth in the 79th General Convention exhibit hall in advance of Purple Scarf Day on July 9.

July 9 is Purple Scarf Day. All are invited to show support for more women in the episcopate by wearing a purple scarf that day. Currently, the House of Bishops is less than 9 percent women (24 women, 261 men). This movement was started by then Diocese of California Canon to the Ordinary Stefani Schatz, who had been working toward a more equal representation of women’s leadership prior to her death a year ago. She handed out purple scarves at the 2015 General Convention.

The Sisters of the Order of St. Helena are distributing the scarves from their booth in the Exhibit Hall. A purple scarf day gathering, open to women and men, will be held at 1:30 p.m. July 9 in the hallway in front of the worship space in the Austin Convention Center and will include brief talks from a variety of people and prayers for women who have offered themselves to the election process.

According to the planners, Purple Scarf Day is a reminder that we can shift to a wider vision. “The vision is for a church in which women’s leadership is recognized and valued as well as men’s; in which our House of Bishops contains the perspectives, insights, and gifts of women rather than being a male-dominated hierarchy; in which seeing a variety of kinds of bishops helps all Episcopalians to recognize the image of God and the gifts for ministry in ourselves and in each other more fully,” the Rev. Lucia Lloyd, a deputy from the Diocese of Virginia, said.