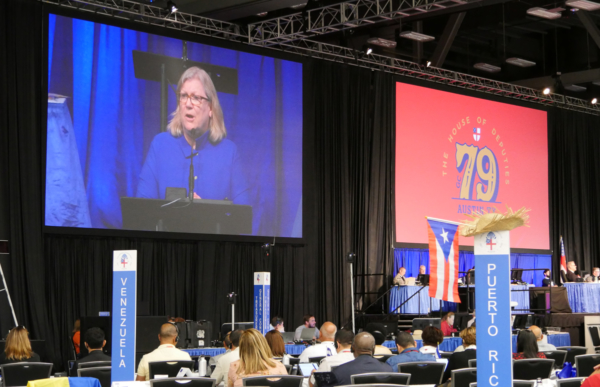 The Rev. Gay Clark Jennings thanks the House of Deputies July 8 just after the house re-elected her as its president for her third and final three-year term. Photo: Mary Frances Schjonberg/Episcopal News Service

Jennings faced no opposition in the election and was elected 786-26. Vice President Byron Rushing chaired the vote and the house rose to its feet in applause.

“Thank you to this house. I love this house and I love this church and so I am grateful for the confidence you have expressed in electing me for a third and final term,” Jennings said after the vote. “In the last six years, you have afforded me the privilege of making a life and serving this church and all of you. I thank you for the opportunity to do it for three more years.” 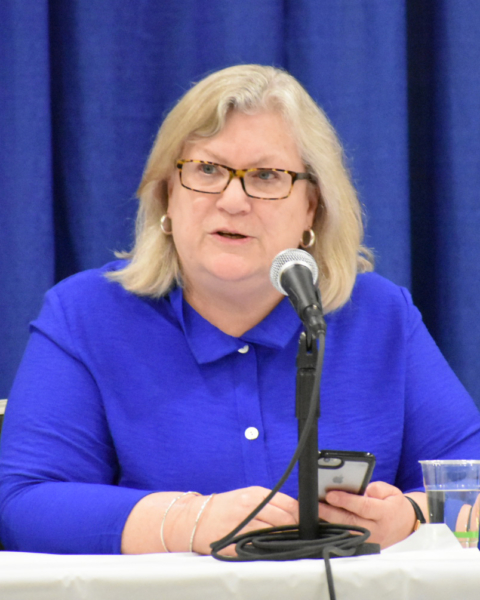 The president is limited canonically to three consecutive three-year terms.

Her election was the last of a series of elections that took nearly three hours of the house’s planned three hour and 45-minute session.

Jennings’ re-election took place two days after the convention agreed to pay the president of the House of Deputies for the work of the office, ending a two-decade-long compensation effort.

The president’s role has been changing since 1964, when the convention gave the position a three-year term instead of simply being elected to preside during convention.

Jennings is a graduate of Colgate University and Episcopal Divinity School, and she has received honorary doctorates from both institutions. She lives outside Cleveland in Sagamore Hills, Ohio, with her husband, Albert, who has been a parish priest for 36 years. They have been married for those same 36 years. Their son, Sam, lives nearby and is a sound engineer. Their daughter, Lee, died in 2010.