[Episcopal News Service – Taylor, Texas] A thousand Episcopalians, at least two for every one female incarcerated at the T. Don Hutto Residential Center in rural Texas, stood under the blistering sun July 8 in public witness to the actions of the U.S. government in its enforcement of immigration policies that have separated families over the last couple of months and have led to roundups and deportations of migrants.

An planning team including people from the Diocese of Texas and local congregations, including St. James’, here in Taylor, led by the Rev. Winnie Varghese, director of justice and reconciliation at Trinity Church Wall Street, New York, and the Megan Castellan, rector of St. John’s Episcopal Church in Ithaca, New York, organized the prayer service in partnership with Grassroots Leadership, an Austin-based nonprofit organization that works for a more just society by challenging the for-profit prison system and mass incarceration, deportation and criminalization of migrants.

The Episcopal Church’s 79th General Convention is underway in Austin through July 13. The U.S. immigration debate and the Trump administration’s zero-tolerance policy loomed large the previous day in a joint legislative committee hearing, where some 25 people testified on issues that included providing sanctuary to immigrants facing deportation, condemning the separation of migrant families, supporting Haitians who are poised to face deportation, and calling for permanent legal status to Deferred Action for Child Arrivals recipients through federal legislation known as the DREAM Act. 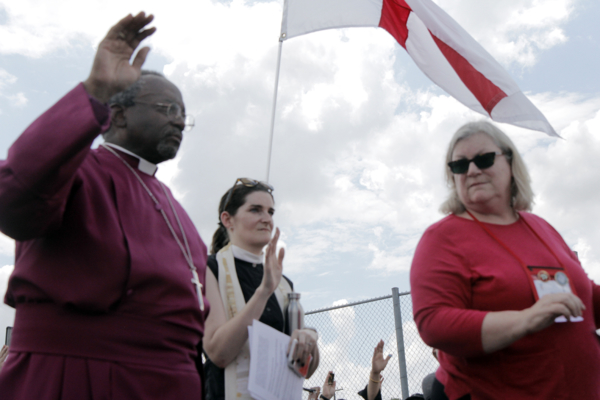 The House of Bishops and the House of Deputies delayed by one hour the start of their July 8 legislative sessions so that the presiding officers and more than 1,000 Episcopalians who were transported by 19 buses could attend the prayer service near the privately operated detention center, housing 500 females in rural Texas about 40 minutes’ drive from Austin.

Standing just outside the detention center’s chain-link fence, Taylor community members Jose Orta and Audrey Amos-McGehee held a sign that read, “End immigrant detention in our nation of immigrants.” In 2006, the T. Don Hutto Center was converted from a medium-security prison to a family detention center, and then in 2009 to a for-profit detention center housing migrant women, some of whom have been separated from their children, Orta said in an interview with Episcopal News Service.

Although there long have been issues with the broken U.S. immigration system, the announcement in April that the Trump administration would begin criminally prosecuting migrants and separating children from their parents while they undergo deportation hearings has called American citizens to advocate for family unification and reunification. 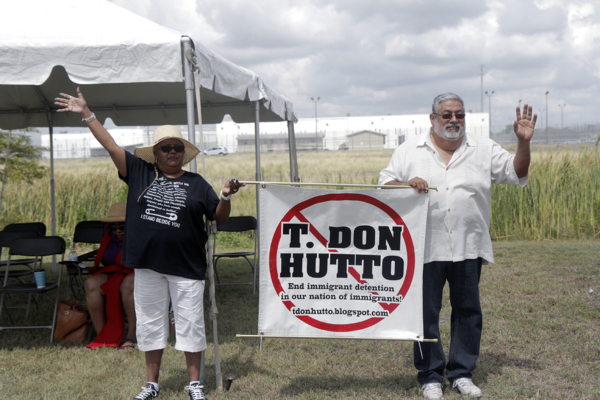 In some cases, it has been a call to advocate for just policies at the national level. In other cases it has meant taking to the streets and bearing prayerful witness, as Episcopalians did outside Hutto.

“I think, frankly, what we’re doing, we’re expressing what most Americans feel. We are horrified by the current state of things. I think most of us cannot imagine how we can make it visible. I think we are afraid to talk our neighbors, we are afraid our friends disagree with us, we are afraid to cause insult. So when we started to do this, we thought we’d get 150, 200 people. We have more than 1,000 just on the buses,” said Varghese, who is also a deputy representing the Diocese of New York.

“Part of what we are seeing is our solidarity with each other and that there’s a great voice in opposition to what is happening in our country, and it’s us,” Varghese said. “It’s among us, and the reason to do things like this is to give people an opportunity to be their best selves.”

“We want to walk in the way of love and accompaniment with our most vulnerable sisters in suffering,” she said. “We are going to do this across the country wherever people are victimized. … Jesus first said, ‘Suffer the little children unto me’; that’s our first call, to stand with the poor, the victimized, the most fragile. The presiding bishop told us to walk in the way of love; it gives us strength to come here and say we can face this together.”

Immigration in the United States, as in other countries, is disorganized, said El Salvador Bishop David Alvarado, in an interview with ENS following the prayer of witness. 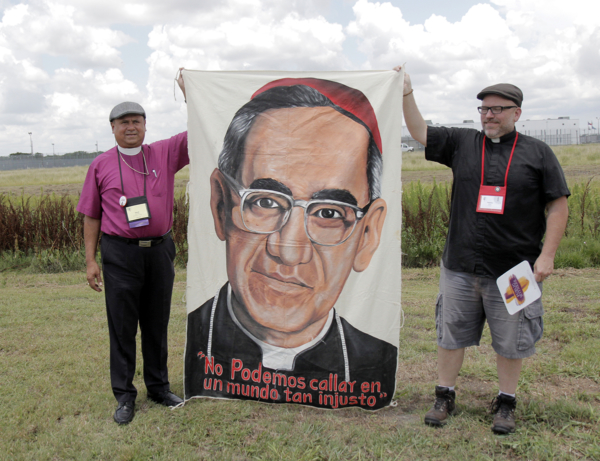 El Salvador Bishop David Alvarado, left, and the Rev. Tommy Dillon, an alternate from the Diocese of Louisiana and a longtime supporter of the Anglican-Episcopal Church of El Salvador, hold up a sigh of Archbishop Oscar Romero, who was assassinated for his social justice work while standing behind the altar. Romero is designated for sainthood in the Roman Catholic Church. Photo: Lynette Wilson/Episcopal News Service

“To be a migrant,” he said, is treated like a crime, when in reality, migrants are fleeing violence and looking not only for opportunity but also for refuge and salvation. In Central America’s Northern Triangle countries – El Salvador, Guatemala and Honduras – people are fleeing social conflict.

“It’s affecting many people; there’s a lot of forced displacement,” said Alvarado, adding that between 60 and 70 people flee El Salvador daily, some of them staying in Guatemala and Mexico, and others making their way to the U.S. border.

As the prayer was happening, an 11-member Salvadoran family was trying to cross the border, and one of the family members was texting their status to Elmer Romero, a Salvadoran-born member of Trinity Episcopal Church in Houston and a board member of Cristosal, a human rights organization providing assistance to Central Americans who have been forcibly displaced by violence. Cristosal began more than a decade ago as an Episcopal ministry.

During the Prayers of the People, Texas Assistant Bishop Hector Monterroso and Central New York Bishop DeDe Duncan-Probe prayed for the termination of violence, poverty and displacement, and for leaders to implement policies that both protect national security and that lead to safe migration and the end of detention for asylum seekers.

“Today is my son’s birthday, and if he had ever been taken from me, I don’t know what I would have done … just because I was trying to bring him somewhere where he could have liberty, where he could have a life,” said Sandra Montes, a music director from the Diocese of Texas who led music at the prayer and sang the day before at the July 7 revival.

“For me, it’s very important that these women [know we are here],” Montes said. “I cannot even put into words the desperation I would feel if I were in there and my child were somewhere else. Or even if he was with me just because we want something better, we’re looking for freedom.”

In a Twitter post following the prayer service, Grassroots Leadership posted that the women in the detention center were crying, just knowing they are not alone. Not leaving anyone alone is at the core of loving one’s neighbor and following Jesus’ teachings, Curry said.

A woman called from Hutto after today’s prayer and told us they were glued to the windows until the last bus left the detention center. Women inside were crying, saying they knew they weren’t alone after seeing so many people there. Thank you @iamepiscopalian! #gc79 pic.twitter.com/7THocwYphq

“Jesus said, ‘Love God and love your neighbor.’ We come in love, that is the core of our faith, that is the heart of it,” said Curry.