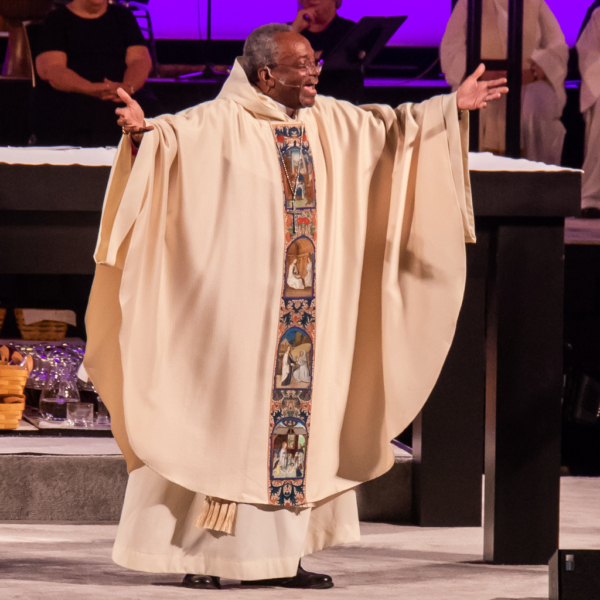 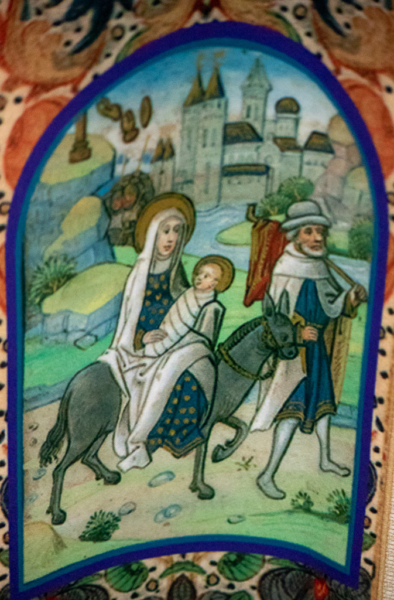 Against a medieval backdrop, the Holy Family flees to Egypt in this detail on a chasuble similar to the one worn by Presiding Bishop Michael Curry at the 79th General Convention. Photo: Mike Patterson/Episcopal News Service

[Episcopal News Service – Austin, Texas] For years, CM Almy has donated vestments to the Episcopal Church for the General Convention. This year, it received a special request from the presiding bishop himself.

A particular vestment had caught the eye of Presiding Bishop Michael Curry, and he wanted to wear it at the opening Eucharist at the 79th General Convention this year.

What apparently attracted Curry to this particular vestment was how the imagery of Mary, Joseph and the baby Jesus as refugees fleeing to Egypt evokes a parallel to the plight of today’s refugees worldwide, and particularly those caught in the U.S.-Mexico border crisis.

Representatives of Almy told Episcopal News Service that they are pleased to  provide the vestments worn at General Convention, especially this one for Curry.

“We have a tremendous respect for Bishop Curry and are pleased to help spread the word about what he is doing,” said David Fendler, Almy’s director of marketing.

Curry’s vestments were designed by Father Vincent de Paul Crosby, O.S.B. For anyone who might wish to purchase a chasuble like the one Curry wore, it can be obtained from Almy for $455.

– Mike Patterson is a San Antonio-based freelance writer and correspondent for the Episcopal News Service. He is a member of ENS General Convention reporting team and can be reached at rmp231@gmail.com.