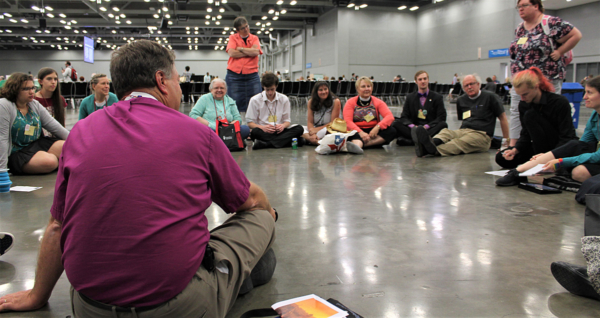 The Diocese of Olympia contingent to the 79th General Convention gathers to discuss evangelism during the TEConversation joint session with bishops and deputies held July 7 in the deputies’ hall. Photo: Sharon Tillman/Episcopal News Service

[Episcopal News Service – Austin, Texas] Bishops and deputies gathered July 7 for the second joint session of the 79th General Convention for a 90-minute program of speakers, video, music and discussion highlighting some of the leading edges of the Episcopal Church’s push for evangelism.

The session was the latest installment in General Convention’s TEConversations series. The first, held July 6, focused on racial reconciliation. Care of creation will be the topic of the third, scheduled for 10:30 a.m. July 10.

The session on evangelism kicked off with a presentation by Iowa Bishop Alan Scarfe, who detailed how his diocese staged 40 revivals across the state in 2017. Scarfe paired his stories with words of encouragement for Episcopalians in their own evangelism, at one point taking inspiration from Jesus’ question to Peter in the Gospel of John: “Do you love me?”

“We do love Jesus,” Scarfe told the crowd of hundreds. “We just don’t always know how to express it and how to own it and how to share it.”

Later in the program, the second speaker, the Rev. Daniel Velez-Rivera, offered his own suggestion for how to share the love of Jesus.

“I love Saint Nike. You know, he’s the one who coined, ‘Just do it,’” said Velez-Rivera, a church planter from Virginia.

TEConversations were conceived for this General Convention to underscore the church’s three priorities during the current triennium, as established in 2015 at the 78th General Convention. The format is built around presentations by three experts on each topic.

At the session on evangelism, the interludes featured a song by members of the Episcopal Youth Event House Band and a video about the work of the Rev. Eric McIntosh and St. James Episcopal Church of Penn Hills in Pittsburgh, which received a Mission Enterprise Zone grant to develop new ministries.

Each of the TEConversations concludes with about a half-hour of discussion among each diocese’s members as the bishops and deputies reflect on what they have heard and how they can apply it to their work in the church.

The third speaker in the evangelism session, the Rev. Lauren Winner, alluded to Episcopalians’ reluctance to talk about evangelism because they may envision handing out pamphlets and harassing people on the street. True evangelism, she said, is rooted in a curiosity about God and a desire to share the love of Christ.

Evangelism can happen within a community of believers, as well as by moving out into the larger community, she said, and the goal needs to be more than simply reviving the denomination.

“Priests are not executive directors of religious nonprofits,” said Winner, an Episcopal priest and author. “What priests are are curiosity provokers. We provoke people’s curiosity about God and then we accompany people as their curiosity compels them to seek out God.” 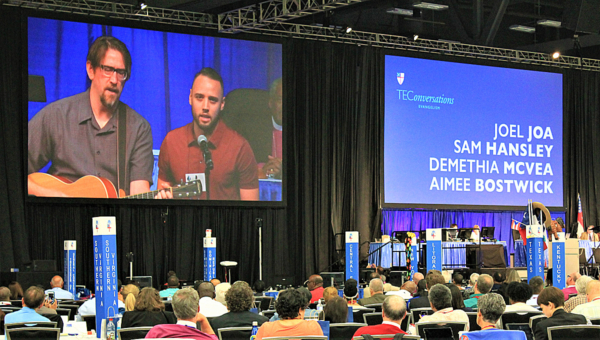 Joel Joa, Sam Hansley, Demethia McVea and Aimee Bostwick, who performed together at Episcopal Youth Event 2017 in Oklahoma City, perform during the TEConversation on July 7 during a joint session in the House of Deputies. Photo: Sharon Tillman/Episcopal News Service

Velez-Rivera also noted the common skittishness about “the E word.” And he agreed that evangelism can be hard, uncomfortable work. He regularly looks to Mark 10:27 for inspiration: “With God all things are possible. Con dios, todo es posible.”

He pointed to the example of Christianity’s first evangelists – Peter, Mary Magdalene, Paul.

“Did they know what they were doing? No, but they had a teacher,” Velez-Rivera said. “They had Jesus.”

Velez-Rivera likes to bring outsiders into the church, even though his congregation, St. Gabriel Episcopal Church, isn’t based in a permanent building. Instead, he reaches out to people in the community. It takes practice to talk to others about Jesus in a relaxed and confident way, he said, but that is what Christians are called to do.

Scarfe’s presentation sought to portray the wide variety of revival events that his diocese organized or assisted with during its first year of experimentation. Each congregation took ownership of the details, with some featuring bluegrass music, a praise band or a choir. One revival also offered a bounce house for the kids, but the bishop indicated he, too, got in on the fun.

“Bouncing up and down in the name of Jesus, and I never laughed as much in my life,” Scarfe said.

Each revival had essential elements, including scripture, prayer and testimony. “Testimony, saying what God really means to you personally, being able to recite how God has worked in yourself or your loved one,” he said.

At the end of 2017, when the revivals were over, Scarfe said he began returning to normal daily and weekly routines but then began wondering, why go back? Instead, the diocese is picking up where it left off and organizing more revivals this year while learning from each experience.

The diocese and its members already have learned to stop “apologizing” for revivals and have embraced their form of evangelism, Scarfe said, and he encouraged his fellow Episcopalians to find their own path.