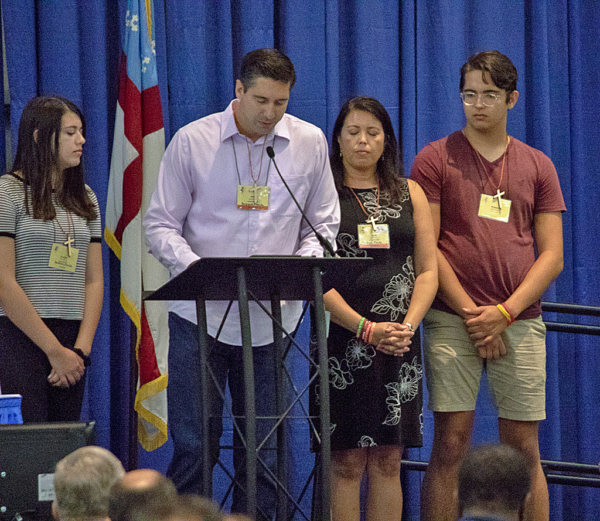 Philip Schentrup stands with his family as he addresses the House of Bishops about gun violence. Photo: Mike Patterson/Episcopal News Service

[Episcopal News Service – Austin, Texas] Philip and April Schentrup, Episcopalians whose daughter Carmen was one of 17 students and educators killed by a gunman at Marjory Stoneman Douglas High School in Parkland, Florida, appeared before the House of Bishops on July 7 to ask them to continue their work to end gun violence.

The House of Bishops stood in silence as the Schentrup family entered the conference hall at the 79th General Convention and approached the podium.

Standing at the microphone with his wife and family at his side, Schentrup described his daughter as “amazing, compassionate and energetic” who “gave her mom and dad a hug every evening.” She was a straight A student, he said, and a talented musician.

“All of Carmen’s dreams came to an end on Ash Wednesday,” he said. That’s when Nikolas Cruz, a 19-year-old former student, walked into the school building on Feb. 14, shot Carmen four times with an AR-15 style rifle, killed 16 others and wounded another 17.

Schentrup told the bishops that “we’re confronting a sobering fact” in the campaign against gun violence. “We’re in a battle between fear and fact,” he said.

He said many advocacy groups have discovered the power of fear with messages to “be prepared because someone’s going to attack your children or destroy your Christian values” and where people are hated “who don’t look like us, act like us.”

He applauded the bishops’ statement against gun violence issued earlier this year, and thanked them for their support for his and other families and for hearing their plea to work for an end to gun violence.

After Schentrup spoke, Presiding Bishop Michael Curry stood and asked for a moment of silence before leading the bishops and visitors in reciting the Lord’s Prayer.

Schentrup’s remarks came a day before a scheduled public witness event organized by Bishops United Against Gun Violence. The event is scheduled for 9:30 a.m. July 8 at Brush Square Park, across the street from the Austin Convention Center where General Convention is meeting.

The Schentrups will speak at the event, along with Abigail Zimmerman, a ninth-grader and Episcopalian from Waco, Texas, who co-led a school walkout in March in response to the Douglas High School massacre.

Bishops United Against Gun Violence is a group of more than 70 Episcopal bishops that is working to curtail gun violence in the United States. “We believe in a God of life in the face of death who calls our church to speak and act decisively against the unholy trinity of poverty, racism and violence,” according to its website.

Following the event, participants will be invited to walk together to the 10:30 a.m. General Convention Eucharist or to attend worship at local Episcopal churches.