[Episcopal News Service –Austin, Texas] In the midst the process of crafting the Episcopal Church’s 2019-2021 budget, a legislative committee took testimony about the need to change that process so all Episcopalians can have greater input in decisions about how the church spends its money.

Only two people, one bishop who had been involved in the process and another currently doing so, spoke to the Governance and Structure Committee on Resolution A102, which calls for a task force “to study and re-create the budget process for the church.” 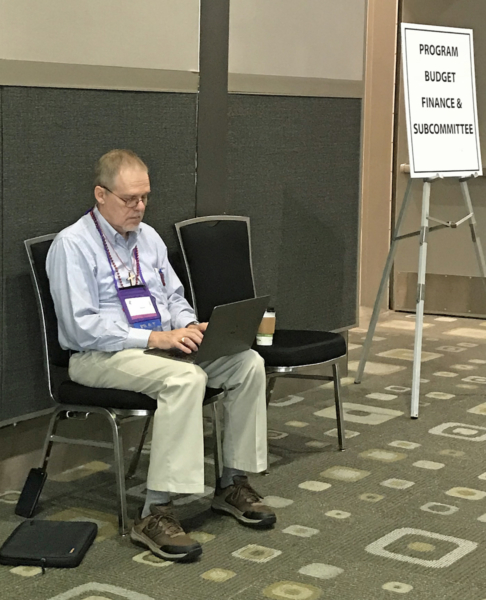 The resolution was proposed by the Standing Commission on Structure, Governance, Constitution and Canons, which says that the current process “does not make enough time available for input by the church at large prior to and during General Convention.” The situation makes for the “frustration, suspicion and disappointment of many deputies, bishops and other stakeholders.” The resolution’s explanation also says it is unclear who is responsible for budget oversight between General Conventions.

The current budget process is outlined in Canon I.4.6 (page 33 here). And, according to the joint rules of General Convention (II.10.c.ii at page 227 here), Executive Council must give its draft budget to the Joint Standing Committee on Program, Budget and Finance no less than four months before the start of General Convention (essentially by February of convention year).

PB&F uses the draft budget and legislation passed by or being considered by General Convention to create a final budget proposal. It also holds hearings for people to explain to the committee why their resolutions should be funded. The budget process at convention runs parallel to the resolution process, and often, one process overtakes the other.

“The greatest heartbreak I’ve had in the church was sitting at the hearings for Program, Budget and Finance and listening to people passionately come and ask us to please fund certain elements of the budget,” West Virginia Bishop W. Michie Klusmeyer, who served on PB&F at the 2006, 2009 and 2012, told the committee. “They were asking for anywhere from $5,000 to $250,000 and pleading their case passionately for what they wanted. I looked down at the papers I had in front of me and at that moment when the hearings were taking place, the budget was probably 96 to 98 percent complete.”

Klusmeyer, who pleaded for a better budgeting system, added that “had we all been honest, we should have stood up and said ‘It ain’t gonna happen.’”

The current draft budget was posted in mid-November on the General Convention website for comment by the church, the second time council has done so. PB&F met in the fall and again earlier this year to familiarize itself with the budget and has been meeting daily in Austin since July 3.

Maine Bishop Steve Lane, PB&F vice chair, told the legislative committee July 7 said that the budget committee got lots of comments on the 2016-2018 draft budget, but the current draft “got very few.”

Lane said PB&F’s current working draft has about $12 million more in funding requests than it has income to cover them. “That’s normal,” said Lane, who is in his third consecutive term on as vice chair.

“It’s our job to receive the requests and present convention with a balanced budget. I don’t know that that would change if we expanded the input [time]. There’s always going to be a greater demand for resources than we have at the moment. Program, Budget and Finance is going to have to do the hard work of balancing desires with resources available. The big problem right now is the time pressure.”

PB&F’s budget must be presented to a joint session of the houses of Bishops and Deputies no later than the third day before convention’s scheduled adjournment. To meet that deadline, the committee must finish its work essentially the day before. According to the draft convention schedule, that presentation is set to take place at 10:30 p.m. CDT on July 11. The two houses then debate and vote on the budget separately. Both houses must approve the same version of the budget, which takes effect at the beginning of 2019.

“It has become clear that it is very difficult for Program, Budget and Finance to materially change the draft budget from Executive Council to reflect funding priorities adopted by General Convention after the draft budget has been prepared or to incorporate funding for major initiatives or projects adopted at General Convention,” the Standing Commission on Structure, Governance, Constitution and Canons said in its report to convention in which it proposed Resolution A102.

Between meetings of convention, the canons assign oversight of the budget to council while convention’s Joint Rules of Order assign very similar responsibilities to PB&F.

“And there is the reality that on a day-to-day basis, it is the staff which administers the budget and makes multitudes of spending decisions that ultimately affect and establish the actual funding priorities,” the Governance, Structure, Constitution and Canons said in its Blue Book report, adding that “there is an inherent conflict or lack of congruency and possibly accountability” between convention, council and staff.

In answer to questions from the committee, Lane said he thinks the budget process is “complicated; I’m not sure it’s broken.”

Over the last three triennia “the process has become increasingly collaborative with Executive Council” through the initiative of both groups, he said. During this triennium, for example, at least one PB&F member has attended each of council’s nine meetings and sat with its Finance for Mission Committee.

The result, Lane said, is that “this current budget is the best budget I have seen in my time with the church; it came to us balanced, it came to us prioritized.”

He said tension around the budget process comes from trying to balance “planning and accountability” on the one hand and “democratic participation” on the other. Council begins to build a budget after consulting with the churchwide staff and various groups around the church. However, that action was one way: council members soliciting input. “It wasn’t ‘y’all come.’ The ‘y’all come’ happens here,” Lane said.

Convention is “somewhat stuck with that structure” unless it can devise another “official and formal” way to get the wider church’s input, he said.

Asked if a task force is needed or whether council and PB&F could make the needed changes, Lane suggested that those two groups have already done such things having budget committee members attend council meetings, allowing PB&F to meet months before convention and posting the draft budget for comment. “It might be helpful to have a sense of direction about what you all want” in terms of how to achieve greater democratic participation.