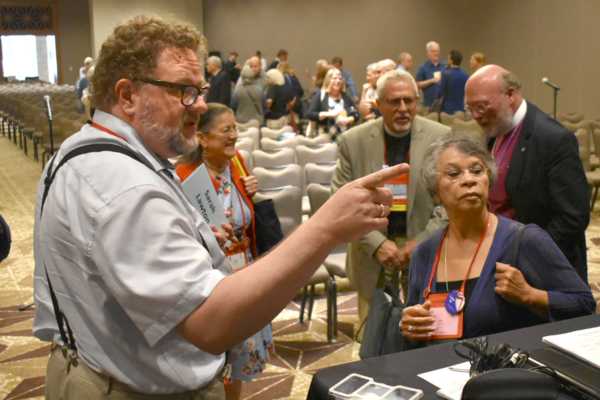 Joshua Farrier and Lyn Crawford knew they had one thing in common going into the 79th General Convention. They both would serve as legislative aides to the Social Justice and International Policy Committee. But when the committee met this week for introductions to get organized, Farrier and Crawford discovered something else they shared: professional training in opera signing.

Crawford, a deputy from Virginia, studied classical singing at Northwestern University, and Farrier has a doctorate in music from the University of Kansas. He now is performing Wagner in Germany, which is why he is a deputy from the Convocation of Episcopal Churches in Europe.

“The Episcopal Church is known for its music,” Crawford told Episcopal News Service on July 6 after assisting with a 2.5 hour hearing on Israel-Palestine resolutions. “We’ve got the best music, let’s just face it.”

She is a lifelong Episcopalian, while Farrier joined the church after working as a soloist at an Episcopal congregation. His professor in college advised him not to waste his time with church music. “Except for the Episcopal Church,” the professor told him. “Their music is really good.”

Despite finding a connection through music, Crawford noted one point of disagreement. While Farrier has gravitated toward Wagner, she’s more of a Puccini person.

Presiding Bishop Michael Curry had to get up pretty early on the morning of July 6 to make his TV appearance on Fox & Friends – 4:30 a.m. to be exact. But he was awake enough to calm the fervor of Bronx Pastor Dimas Salaberrios, with a backdrop of silent witnesses praying for God to stay male and not go changing on them.

“Jesus is Lord. Do not worry about that. This discussion is about worship and worship language, but this is not about changing God or Jesus,” Curry said, signing off with the comfort that the Trinity is eternal.

The television media has kept up a steady drumbeat of controversy around Resolution A068, which as the Presiding Bishop pointed out, if passed would not change anything for at least nine years. As currently written, it would authorize revision with sensitivity to inclusive language but would not change the wording of historic documents included in the Book of Common Prayer. 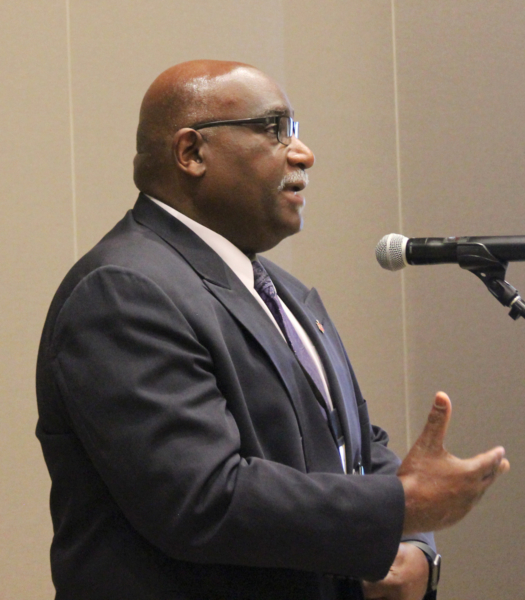 Bishop Gregory Palmer of the United Methodist Church speaks about Resolution A041 during discussion in the Ecumenical and Interreligious Relations Committee on July 6. Photo: Melodie Woerman/Episcopal News Service

On July 6, the Ecumenical and Interreligious Relations Committee passed Resolution A041, which calls for additional study of a proposal for full communion between the United Methodist Church and the Episcopal Church, entitled “A Gift to the World, Co-Laborers for the Healing of Brokenness.”

Full communion would provide for exchange of clergy between the two churches but is not a merger of the two denominations.

Plans call for the United Methodist Church to vote on the proposal during its General Conference in 2020. It then would come to the Episcopal Church’s 80th General Convention in 2021.

News conference outside Convention Center (not about the convention)

The Episcopal Church’s Office of Public Affairs has scheduled news conferences each day of the 79th General Convention through July 13 for reporters covering the convention, but the church had nothing to do with another news conference that popped up late morning July 6 just outside the Austin Convention Center. 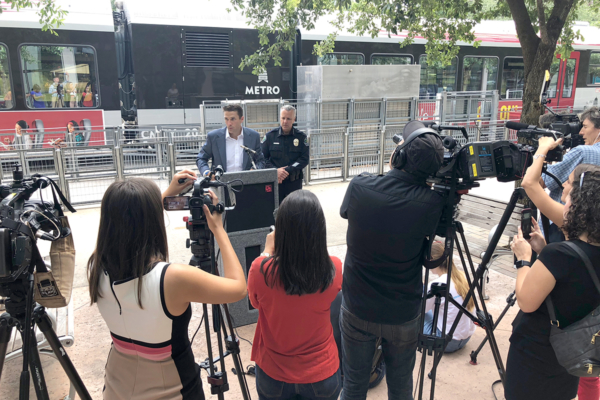 Local TV news cameras set up on the sidewalk on the north end of the convention center as Capital Metro Chief Executive Officer Randy Clarke welcomed them and said a few words about public transit safety. He was joined by Austin Police Chief Brian Manley, who was sworn in as head of the department just last month.

And for this news conference, the cameras were pointed away from the convention center, toward Clarke and Manley who were standing in front of their chosen backdrop – a MetroRail train waiting for passengers at the downtown Austin station.