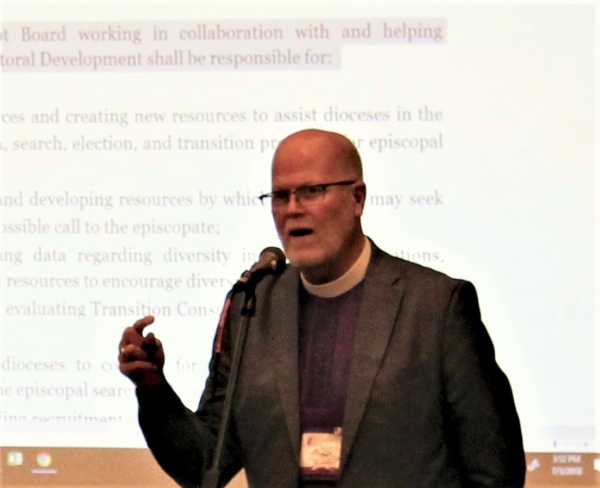 The Rt. Rev. Todd Ousley, bishop for the Office of Pastoral Development, testifies at General Convention before the Committee on Churchwide Leadership on Resolution A147.

[Episcopal News Service – Austin, Texas] The Committee on Churchwide Leadership is grappling with a host of resolutions, all of which are related in some way to the discernment, election and consecration of bishops, as well as issues surrounding leadership impairment due to alcohol and substance misuse and behavioral addictions. In the life of the church, these two topics go hand in hand.

“We cannot look at these issues in isolation they are so connected,” said the Rt. Rev. Todd Ousley, bishop for the Office of Pastoral Development.

The Task Force on the Episcopacy, which reviewed the existing process and made recommendations to improve the path to the episcopacy, increase diversity in the House of Bishops, and offer support to the Office of Pastoral Development in its work with dioceses, advanced 34 resolutions. Those pertaining to the discernment of and evaluation for the episcopacy are A145, A146, A147 and A148. The task force’s Blue Book report begins on page 678.

Where the two groups intersect is in the areas of physical and mental health, and substance abuse and addiction. Impairment and Leadership considered this from the perspective of awareness training and crisis intervention, and Task Force on Episcopacy through screening, privacy and reporting.

How to help the church elect bishops who will have successful episcopates was part of the task force’s work, Katie Sherrod of Fort Worth explained, noting that former Maryland Bishop Suffragan Heather Cook’s “shadow obviously loomed large over the resolution that put us into existence.” Cook killed bicyclist Thomas Palermo in December 2014 as she was driving and texting while drunk. She had been previously arrested in 2010 on an impaired-driving charge. Cook disclosed the arrest to diocesan leaders during the bishop suffragan search process, according to a diocesan statement released after the Dec. 27 accident, but the entire convention that elected Cook on May 2, 2014, was not told about it.

Deputy Scott Slater of Maryland testified on July 5 before the Committee on Churchwide Leadership in support of Resolution A147, to create a Pilot Board for Episcopal Transitions. From Slater’s experience as someone who has a history of addiction, the church lacks procedures for vetting someone thoroughly. This was the case in Maryland, and he experienced it again as a recent candidate for bishop elsewhere.

“I was asked a series of 22 questions and any ‘yes’ answer causes the search or standing committee of the diocese to dig deeper. I’m not sure of the resources available to Transition Consultants when faced with a ‘yes’ answer to one of the 22 questions. In my recent experience, they did not seem to have adequate resources and standards in vetting,” Slater said. “I found myself having to educate the standing committee who was vetting me on how to vet me because of that ‘yes’ answer.”

Slater sees both training transition consultants and making public the resources they use to aid dioceses throughout the transition process important steps to improving the bishop election process.

Describing the process of the 22 questions on the Behavioral Study Questionnaire, a clinical interview of a candidate for bishop, Ousley said, “Answers are part of a ‘decision tree’ where answers can lead to other questions in the clinical assessment. The assessment has a medical and a psychiatric component. This process is specific to potential bishops.” He added that some dioceses use this or a similar process for clergy as well.

After the assessment, the Office of Pastoral Development receives the report from the medical doctor and a certificate from the psychiatrist. If there are no yellow or red flags, then the respective certificates – not the reports – are shared with the presiding bishop and the diocese’s Standing Committee president. The certificates state that there is nothing in the assessment to prevent the person from functioning as bishop. If something is flagged in either report, then the information is shared with the presiding bishop and the president of the Standing Committee of the diocese.

It is highly recommended by the OPD that dioceses have the medical and psychological evaluations done before the candidate is put on the slate. The office began recommending that practice in July 2017. The common practice had been to do these evaluations post-election.

– Sharon Tillman is a freelance writer and a member of the ENS General Convention reporting team.