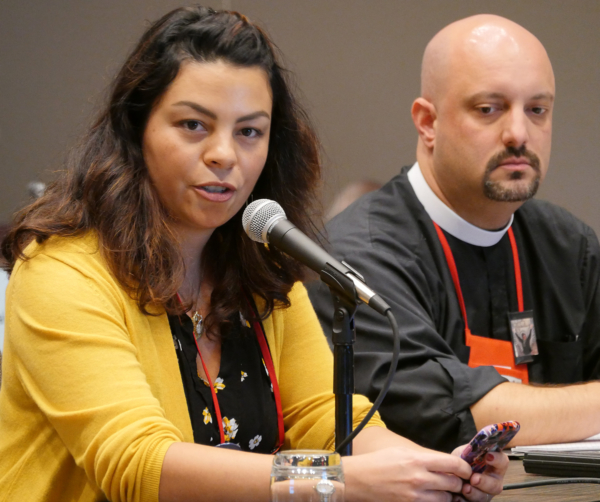 [Episcopal News Service – Austin, Texas] People of all genders told the Safeguarding and Title IV Committee July 5 that the Episcopal Church must do more to eliminate sexual discrimination and abuse.

“What we witnessed last night was just a beginning,” the Rev. Cynthia Taylor, a Georgia deputy, told the committee, referring to the House of Bishops’ “Liturgy of Listening,” a service of lament and confession centered on stories of sexual abuse and exploitation in the Episcopal Church. “That work is incomplete, my sisters and brothers.”

Taylor said the work is incomplete if “we pat ourselves on the back for being open to discussion of the role of institutional discrimination, harassment and abuse of women.” The church must find a way to continue “not just the conversation but the hard work of seeking the truth, respecting the dignity of all human beings through the restoration of their God-given rights as children of God.”

Since she became the first woman ordained in the Diocese of South Carolina more than 32 years ago, Taylor said she has “had personally experienced gender biases in the form of equality of pay, sexual harassment, sexual abuse and gross misuse of power by ecclesiastical authorities” in clergy discipline cases.

“Things have changed somewhat, but the abuses of the past are not only still with us. There is a sense that by just speaking up about injustices, such injustices have been addressed,” she told the committee. “They have not.” 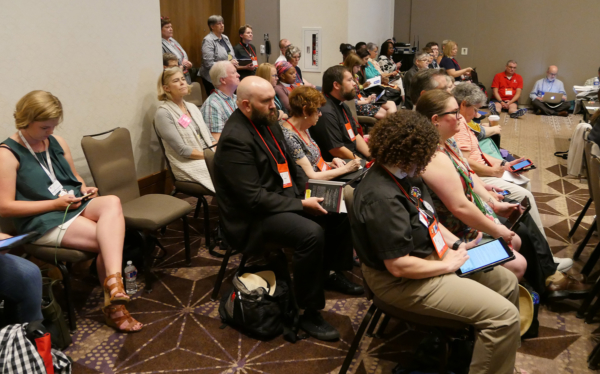 D016 would have the General Convention “confess our sins of gender-based discrimination, harassment, and violence against women and girls in all their forms as we understand these sins.” It would call on the Episcopal Church to “turn from the systems of oppression, patriarchy, heteronormativity, white supremacy, and our colonial legacy, among them, and seek to engage in restoration of the dignity of women and reconciliation from past acts.” It would establish a task force to help accomplish that work. The resolution is “meant to address issues related to gender-based violence and discrimination on an overall structural and cultural level,” said Oklahoma Deputy Julia Ayala Harris who proposed the resolution.

Citing the work of the Evangelical Lutheran Church in America and the United Methodist Church, Ayala Harris said, “We find ourselves in the midst of a movement that has already begun within other mainline denominations. This is not uncharted territory.”

D020 would appoint a task force to conduct a survey on “gender-based discrimination, harassment, and violence against women and girls in all their forms as we understand these sins, which include, but are not limited to, sexual and gender harassment, sexual assault, physical, spiritual, and emotionally abusive behavior, and oppression based on gender.” The results of the survey would be publicly reported online no later than early 2021, the year of the 80th General Convention.

When asked by a committee member if she would accept a move by the committee to combine the two resolutions, Ayala Harris said she had anticipated such a suggestion and had prepared a draft for such a move.

The Rev. Brian Baker, Northern California deputy and member of Executive Council, said, “The church is a hostile work environment for women and it’s just not okay.”

“I am embarrassed that the church is being led by the culture of the #MeToo movement,” he said. “We’re responding because they woke up when we should have woken up first.”

The Very Rev. Craig Loya, a Nebraska deputy, told the committee that he agreed to be an official endorser of D016 because “it is long past time for us as a church to fully account for the ways that we have been complicit in – in ways that we have actively perpetrated – sexism, misogyny, sexual harassment and gender discrimination.”

Rowan Pantalena, a postulant from the Diocese of Connecticut and a self-described “nonbinary trans person,” spoke to the committee about the aftermath of being raped while in seminary. That experience, Pantalena said, showed “how hard it is to speak up.”

“Please consider the difficulty that comes for anyone who speaks about their own experience of sexual harassment and violence, whether perpetuated by people employed by the church or external,” Pantalena said.

The members also heard testimony on two memorials, or petitions, to convention, one titled “Women and Social Justice,” which tells convention that “this is our moment to offer healing and to bring our laws closer to the justice and equity that God envisions for us.” The other, “Gathering of Gen X and Millennial Clergy,” asks the church to work for gender equity and “expend resources to create a more equitable church.”

Resolutions D016 and D020 are among the 24 resolutions proposed by the members of the special House of Deputies Committee on Sexual Harassment and Exploitation, appointed in February by the Rev. Gay Clark Jennings, House of Deputies president. They focus on inclusive theology and language; disparities in pay, hiring, leave and pensions; changes to the Title IV disciplinary process and training; truth and reconciliation; and systemic social justice beyond the church.