This story has been updated with a summary of a second hearing on the evening of July 5.

[Episcopal News Service – Austin, Texas] The legislative committee charged with considering changes to the Book of Common Prayer heard from supporters and opponents of Resolution A085, which would strengthen the church’s commitment to sacramental marriage equality.

The resolution would require all bishops of the church to make provision for all couples asking to be married to have “reasonable and convenient access” to the two trial-use marriage rites for same-sex and opposite-sex couples approved by the 2015 meeting of General Convention (via Resolution A054). It would also add those rites to the Book of Common Prayer and amend the prayer book’s other marriage rites, prefaces and sections of the Catechism to make language gender neutral.

General Convention’s Task Force on the Study of Marriage that has monitored the use of the two new marriage rites was aware of concern about unequal access to the trial-use liturgies. Its Blue Book Report says it found widespread acceptance of the rites across the church. Eight diocesan bishops in the 101 domestic dioceses have not authorized their use.

The task force proposed A085 in part to provide such access. Episcopalians who support that effort were active ahead of convention. The group Claiming the Blessing, which formed in 2002 to advocate for the “full inclusion of all the baptized in all sacraments of the church,” according to its website, published an advocacy piece. Some Episcopalians in the Diocese of Dallas have developed a website called “Dear General Convention” that includes videos and written stories about people who cannot be married in that diocese.

Some opponents also organized their testimony. Among those testifying against the resolution were a number of members of the Church of St. John the Divine in Houston, many of them young people who said they were raised in the evangelical tradition and appreciated the broadness of the Episcopal Church. However, most said they worried about the resolution’s impact on the rest of Anglican Communion and the larger Christian world for what they called a turning away from traditional teachings and interpretation of Scripture.

Julian Borda, from St. John the Divine, said that the Gospel of John warns there are leaders who hear the word of Jesus and who believe it “but then remain silent because they love the praise of men more than the praise of God.” Borda said he is called to be a priest in the church and fears that he that he will be required to “deny an unpopular truth” found in the Book of Genesis that says “God has mandated” that there are men and women, and that marriage is a “lifelong commitment between the male and the female.”

Honduras Deputy Norma Coello said she was raised to believe that what the Bible said was the word of God. “I can’t believe that, at this age, I am going to learn that he was wrong,” she said.

Moreover, many who spoke in opposition said they feared that they would lose their place in the Episcopal Church if the resolution passes.

Emily Hodges, a member of St. John the Divine, told the committee that she felt the resolution would take away her freedom in order to grant it to others. “I have to ask: who’s the winner right now?” she said. 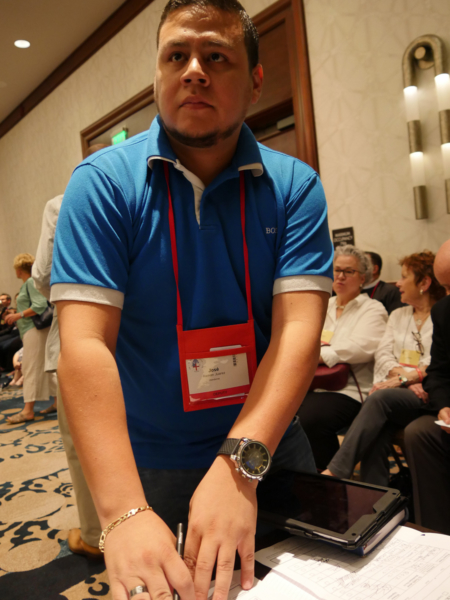 Five Province IX diocesan bishops and one retired bishop who were representing the dioceses of Ecuador Litoral, Ecuador Central, the Dominican Republic, Venezuela and Honduras warned the task force that if convention makes changes about marriage that would force them “to accept social and cultural practices that have no biblical basis or acceptance in Christian worship,” the action would “greatly deepen the breach, the division and the Ninth Province will have to learn to walk alone.” The bishops of Colombia and Puerto Rico, also dioceses in Province IX, did not sign the statement.

Diocesan of Honduras Bishop Lloyd Allen was scathing in his criticism of the lack of an official translator for the hearing, saying it was symptomatic of the constant feeling he has of being unwelcome in the church.

“If the church continues to change the prayer book and to play with Scripture, it will be a time, probably, for Province IX, who are not welcome, to begin to walk apart,” he said. “It’s not easy to stand before you and utter these words, but what can we do in a church where we are not welcome?”

Other witnesses explained their support for the resolution. The hearing’s first witness, Fred Ellis, from the Diocese of Dallas whose bishop will not authorize the rites, said A085 “gives us the opportunity to have full status.”

The Rev. Casey Shobe, rector of Church of the Transfiguration in Dallas, told the committee he wants to be able to offer the sacrament of marriage to all members of his church, regardless of their orientation. Currently, LGBTQI Episcopalians and their straight allies in Dallas “feel the stinging pain of exclusion.”

Allen Murray from Diocese of Oregon told the committee he would not argue theology in the two minutes allotted to each witness. Instead, he told the committee that he and his husband have been together for 10 years and married for five of those years. How, he asked, could the Episcopal Church baptize their 3-year-old daughter “but tell her parents that their relationship is not equal?”

Los Angeles Bishop Jon Taylor said that the Episcopal Church’s stance on marriage equality is a matter of evangelism. Despite the number of young people who testified against A085, he said, most polls show that the majority of young people consider the issue “a settled matter.”

“Let’s simplify our message and let our ‘yes’ be ‘yes,’” he said, echoing the biblically based motto of some A085 supporters. 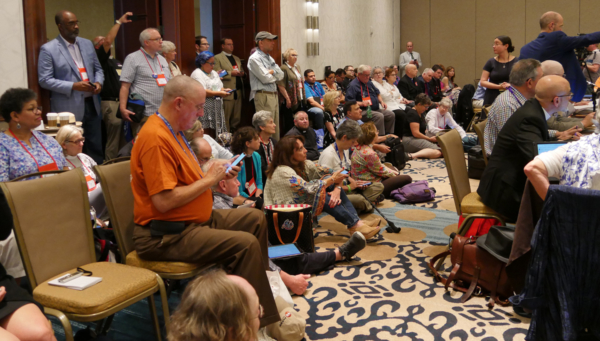 The Rev. Ruth Meyers, a California alternate deputy and liturgy professor who has long been active in the church’s marriage-equality work, told the hearing that the church’s constitution allows for partial revisions of the prayer book. She said the changes to the Book of Common Prayer’s wording “makes room for different understandings” of marriage.

She also reminded the members that passage of A085 would be in line with actions by the Anglican provinces of Brazil and Scotland.

The gathering was also a hearing for Resolution B012, which would continue trial use of the marriage rites without a time limit and without seeking a revision of the prayer book. The resolution proposes that access to the liturgies be provided for in all dioceses, without requiring the permission of the diocesan bishop. Instead, congregations that want to use the rites but whose bishops have refused permission may request and will receive Delegated Episcopal Pastoral Oversight (DEPO) from another bishop of the church who would provide access to the liturgies.

“Some, including member of this committee, have taken great exception to my proposing B012 particularly in the [context of the] long, arduous and faithful work of the task force, but given that, do not, do not dismiss the opportunity that is before you and the church today and in the days to follow at this General Convention,” Provenzano said.

To address the concerns of Province IX, Resolution B012 also calls for a Task Force on Communion Across Difference, which would be “tasked with finding a lasting path forward for all Episcopalians in one church, without going back on General Convention’s clear decision to extend marriage to all couples, and its firm commitment to provide access to all couples seeking to be married in this church,” the three bishops’ news release said. The task force would seek a path consistent with the church’s polity and the 2015 “Communion Across Difference” statement of the House of Bishops, prompted by bishops who objected to convention’s actions on marriage.

Seven bishops, five who refuse to authorize the rites and two of the five bishops who signed the Province IX statement, said on June 28 that they will implement Resolution B012 if it is passed.

The legislative committee – officially titled the Committee to Receive the Report of Resolution A169 – held a second hearing the evening of July 5 to hear from even more Episcopalians.

So many people asked to speak at the committee’s 7:30 p.m. hearing that it was moved to a larger room and ran 30 minutes past the designated time. Most who spoke did so in support of Resolution B012.

One of those was Shobe, Transfiguration’s rector who testified at the earlier hearing. He called the resolution “a good faith effort to provide access for churches like mine in a diocese like mine.” He said he had some reservations about how the Delegated Episcopal Pastoral Oversight process would work in practice, but he said it was important for the church to “discern a pathway forward.”

Dallas Bishop George Sumner called the resolution a “fitting witness as Christians to address a problem.” He noted, to the chuckles of some in the gallery, that if he and Shobe supported the same resolution, “Maybe we’re on to something.”

Among those who opposed the resolution was the Rev. Juan Oliver, the church’s Custodian of the Book of Common Prayer. He called the resolution “well-meaning but problematic.” He said it was wrong for the church to allow the conscience of bishops to take precedence over the will of General Convention. “Bishops should not be above the General Convention,” he said, “and to pretend otherwise is to court disaster.”

– The Rev. Mary Frances Schjonberg is the Episcopal News Service’s senior editor and reporter. Melodie Woerman, director of communications for the Diocese of Kansas and a member of the ENS General Convention reporting team, contributed to this story.