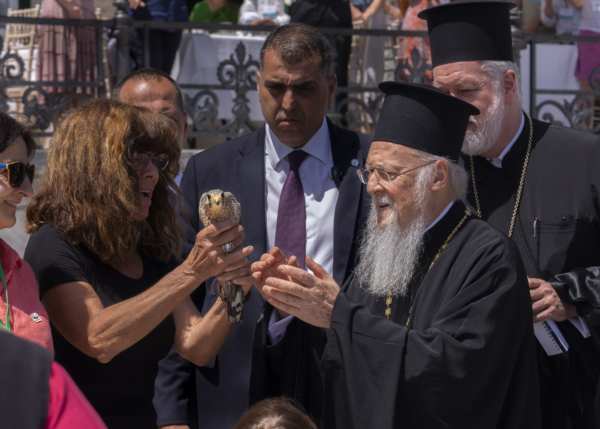 His All-Holiness Ecumenical Patriarch Bartholomew, head of the Orthodox Church, releases a rehabilitated kestrel during an international symposium on the climate crisis. Photo: Robert A. Jonas

[Episcopal News Service] Earlier this month, leaders of the Eastern church and the Western church, representing billions of people worldwide, spoke with one voice about the moral urgency of confronting the climate crisis.

“A civilization is defined and judged by our respect for the dignity of humanity and the integrity of nature,” declared the head of the Orthodox Church, His All-Holiness Ecumenical Patriarch Bartholomew, in his keynote address for an international symposium held June 5-8 in Greece. “Toward a Green Attica: Preserving the Planet and Protecting Its People” was the ninth international interdisciplinary and interreligious symposium that the patriarch has convened since 1991 to highlight the spiritual basis of ecological care and to strengthen collaboration across disciplines in the quest to build a just and habitable world.

Two hundred leaders in a variety of fields – science, economics, theology, public policy, journalism, business, human rights and social justice activism – attended the symposium, which gathered initially in Athens and then moved to the islands of Spetses and Hydra. Participants studied the latest findings of climate science, explored strategic actions toward sustainability and resilience, and renewed their commitment to push for the economic and societal changes that must take place if we are to avert social and ecological chaos and widespread suffering. (For the program and a list of participants, visit here.)

The Rt. Rev. Nicholas Holtam, bishop of Salisbury, represented the archbishop of Canterbury and affirmed the commitment of the Anglican Consultative Council to address the climate crisis (e.g., Resolution 16.08: Response to Global Climate Change). As the Church of England states on its website, “We believe that responding to climate change is an essential part of our responsibility to safeguard God’s creation.” From Sept. 1 to Oct. 4, Anglicans will unite with Christians around the world to care for God’s creation in during the annual “Season of Creation.” (Materials for participating in the “Season of Creation” through worship, study and prayer are available from the Anglican Communion Environmental Network and other sources here; a guide to celebrating the 2018 “Season of Creation” is available here.)

Cardinal Peter Turkson, a Ghanaian cardinal of the Roman Catholic Church who worked closely with Pope Francis in developing the papal encyclical “Laudato Si’,” represented the pope at the symposium. Turkson read a statement from Pope Francis that included these lines: “It is not just the homes of vulnerable people around the world that are crumbling, as can be seen in the world’s growing exodus of climate migrants and environmental refugees. As I sought to point out in my Encyclical ‘Laudato Si’,’ we may well be condemning future generations to a common home left in ruins. Today we must honestly ask ourselves a basic question: ‘What kind of world do we want to leave to those who come after us, to children who are now growing up?’” (The entire statement can be found here.)

One of the most powerful, disturbing and illuminating lectures was given by Jeffrey Sachs, a world-renowned professor of economics and director of the Earth Institute at Columbia University. Sachs gave a one-hour overview of the history of economics that included a blistering critique of corporate capitalism and its veneration of greed, by which “nature is utterly sacrificed for profit,” he said. (A professional videographer recorded the speech, but until that video becomes available, you can watch a recording here.)

Professor Hans Joachim Schellnhuber, director of Potsdam Institute for Climate Impact Research, gave a hair-raising presentation on the precarious health of “the vital organs of the planet,” such as the Gulf Stream, coral reefs, alpine glaciers, the Amazon rainforest and the West Antarctic Ice Sheet (a recent study shows that Antarctica’s ice loss has tripled in a decade; if that continues, we are in serious trouble). Citing “A roadmap for rapid decarbonization,” a 2017 article from the journal “Science,” Schellnhuber contended that we could halve carbon emissions every decade – “but we have to want to do it.”

Other speakers likewise underscored the urgent need to galvanize our vision, will, and moral courage as we confront the climate crisis, which poses an existential threat to civilization.

Both Turkson and Sachs left the symposium early to make a trip to Rome. Pope Francis had taken the unprecedented step of inviting the world’s top fossil fuel executives – including the chairman of Exxon Mobil, the chief executive of the Italian energy giant Eni, and the chief executive of BP – along with money managers of major financial institutions, to meet with him in a two-day closed-door conference at the Vatican. Turkson and Sachs joined the meeting to add their perspectives.

“There is no time to lose,” the pope told the participants. He appealed to them “to be the core of a group of leaders who envision the global energy transition in a way that will take into account all the peoples of the earth, as well as future generations and all species and ecosystems.”

Thus, in one extraordinary week, Christian churches, both East and West, called for robust action to address climate disruption.

The Rt. Rev. Marc Andrus, bishop of the Episcopal Diocese of California and leader of the presiding bishop’s delegation to U.N. Climate Summits, commented, “The moment is dire, and also is (humanity’s) moment of greatest possibility. St. Irenaeus called a human fully alive the glory of God. Now, 1,300 years later, we may understand that for humanity to act as one for the good of the Earth is yet a greater expression of God’s glory.”

Looking back on the symposium, Andrus was thankful for its “great spirit of respect and mutuality. Rather than lobbying to enlist people to each cause, there was a celebration of what each person is doing to heal the Earth, and a seeking to support each person on their path, to make connections. A good example of this to me was the tremendous joy we all felt as the ecumenical patriarch released two kestrels that had been nursed back to health by an Athenian woman whose ministry is protecting and healing endangered birds.”

Another Episcopal participant, Sheila Moore Andrus, a biologist and an active climate champion from the Diocese of California, expressed appreciation for the opportunity to meet new climate activists and connect with individuals she has long respected – including the Rev. Fletcher Harper, who, she said, “is currently working on a project similar to one I am working on for the Diocese of California: a web-based tool that can help people decrease their carbon footprint and aggregate those choices by church and diocesan community. The conference gave Fletcher, Marc and me a chance to explore ways to promote such a tool among interfaith groups, and all this in settings filled with inspiring talks and sacred indoor/outdoor spaces.”

Harper, executive director of GreenFaith, concluded: “The fact that it was searingly hot during the symposium made the point about the need for action as powerfully as any of the speakers. This September, the multifaith service at Grace Cathedral (in San Francisco) at the start of the Global Climate Action Summit gives everyone a chance – whether in person or on the livestream – to commit to living the change in our own diet, transportation and home energy use that’s needed for a non-scorched, sustainable future.”