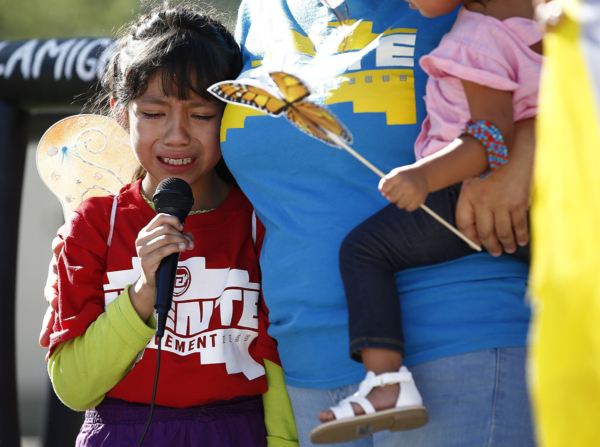 Akemi Vargas, 8, cries as she talks about being separated from her father during an immigration family separation protest in front of the Sandra Day O’Connor U.S. District Courthouse in Phoenix on June 18. Child welfare agencies across the U.S. make wrenching decisions every day to separate children from their parents, but those agencies have ways of minimizing the trauma that aren’t being employed by the Trump administration at the Mexican border. Photo: Ross D. Franklin/AP

[Episcopal News Service] The U.S. government is holding the youngest children – babies and toddlers – separated from their families in “tender age” shelters in south Texas. In these shelters, some children are kept in chain-link cages, their screams and cries for their parents a cacophony of terror.

On June 20, under intense political pressure, President Donald J. Trump reversed his stance and signed an order ending family separations at the U.S.-Mexico border. The new order will now keep families together in federal custody while they await prosecution for illegal border crossings. However, that might violate court orders that bar the government from keeping children in family detention centers for more than 20 days and that require children to be housed in the least-restrictive setting possible.

The Trump administration’s “zero tolerance” policy has separated 2,342 children from 2,206 parents at the U.S.-Mexico border between May 5 and June 9, according to a June 19 report on the online news site Vox. That statistic follows an announcement last week by the Department of Homeland Security that 1,995 children had been separated from their parents from April 19 to May 31. The policy was meant to deter other families – many fleeing violence in Central America – from attempting to request asylum at the U.S.-Mexico border.

On June 21, the summer solstice, the Episcopal Church’s Office of Government Relations will hold a 12-hour prayer vigil for family unity from 9 a.m. until sunset in its chapel on Capitol Hill in Washington, D.C., to call further attention to the Trump administration’s policy. A virtual vigil will be streamed live on Facebook from noon to 1 p.m. Eastern time.

“We are holding this vigil to condemn family separation and to pray for all parents and children who are currently being detained. While tomorrow we will be focused on the recent separations of families at the border, we must also remember the millions of families who have been torn apart by violence and persecution in the global refugee crisis,” said Rebecca Linder Blachly, director of the Washington, D.C.-based Office of Government Relations. “We chose to hold this vigil on June 21 – the longest day of the year – because every day that family members are separated is too long. We will join together with interfaith partners to pray together for an end to this crisis, and to ask all governments to develop humane policies towards migrants.

“We continue to encourage Episcopalians and all people of faith to call on the U.S. Congress to end harsh and harmful immigration policies and to pass bipartisan, comprehensive reform that recognizes the dignity of every person.”

Trump made curbing immigration a centerpiece of his campaign and his administration. Within days of taking office, Trump signed three executive orders cutting funding to so-called sanctuary cities, calling for a wall along the U.S.-Mexico border and suspending the entry of immigrants from seven Muslim-majority countries.

In defense of his separation policy, in a June 19 speech to the National Federation of Independent Business, Trump said: “When you prosecute the parents for coming in illegally, which should happen, you have to take the children away.”

In anticipation of the executive order, New York Bishop Andrew M.L. Dietsche issued the following statement: “I pray that by the time this letter reaches you the hundreds and hundreds of children, including small babies, who have been taken by force from their parents and are currently detained in this country will be returning to their families. People across the political spectrum and faith communities in America are joining in heartbroken and outraged opposition to what may well be the cruelest and least defensible policy decision by an American president and administration in our memory.

“The recordings and photographs of the children are almost impossible for any caring person to apprehend. I left New York late last week to baptize my youngest grandchild, and as we watched my daughter’s happy, carefree children in their safe home she turned to me and said, ‘I can’t follow this news story. I can’t even open the articles.’ Because it does violence to our eyes and ears, and assault and battery to our hearts. It strikes terror. And it is racist. And it is systematic child abuse,” Dietsche said.

In a statement from the Diocese of West Texas, Bishop David Reed and Bishop Suffragan Jennifer Brooke-Davidson, wrote: “We, like many of you, have watched and read with increasing dismay and frustration the federal government’s use of family separation as a blunt instrument of immigration policy along our border with Mexico. We have been embarrassed and angered to see our political leaders point fingers at each other while children and their mothers (it’s almost always mothers) are taken away from each other. We can imagine little that could be more heart-breaking or traumatizing—for children or parents—than to be forcibly separated with no awareness of when, or if, we would see one another again.”

The June 21 vigil follows on the annual international observance of World Refugee Day June 20, which is intended to raise awareness to the violence and persecution of refugees worldwide.

Worldwide, an unprecedented 68.5 million people have been forcibly displaced from their homes; 24.5 million of them are refugees, half younger than 18. For more than a century, the Episcopal Church has welcomed refugees and has advocated for immigration policies that protect families, offer a path to citizenship and respect the dignity of every human being. Some of this work happens behind the scenes; other times, it is carried out in public statements, advocacy and public witness.

On June 19, Washington, D.C., Bishop Mariann Edgar Budde joined dozens of other female faith leaders outside of the U.S. Customs and Border Protection headquarters to pray together and speak out against the Trump administration’s policy of separating migrant families at the borders.

“As women of faith, we speak on behalf of mothers and fathers, men and women. We speak on behalf of all Americans who are horrified at the way that migrant families are being forcibly separated at our borders,” Budde said. “These adults and children have already been traumatized by life-threatening violence in their own countries, and they have made the dangerous journey to our borders in hope of refuge. Yet then when they arrive to the United States, in our name, they are forced apart – the most devastating trauma imaginable for young children and parents.

“I speak today as a disciple of Jesus Christ, who taught us, by his example, to welcome children when they come to us, to welcome, not detain them. He taught us that however we treat the least among us – those most vulnerable and in need of care – is how we treat Christ himself,” she continued.

“Our nation’s immigration policies have been devastating for children for a very long time. The level of cruelty rises with each new policy, thus far without sufficient outrage among the American people to compel our elected officials to change course.”

Presiding Bishop Michael Curry signed onto an interfaith statement calling for an end to the Trump administration’s immigration policies. And the presiding bishop has talked about immigration and Jesus’ call to welcome the stranger in mainstream media, including on MSNBC’s “AM Joy” and “The Last Word” and in interviews with various newspapers.

Bishops throughout the church have criticized the Trump administration’s immigration policies.

“It’s not political to say that causing children’s tears and mothers’ fear is the best use of our nations might, it’s Christian. It’s not being political to remember that both Republican and Democratic presidents previously chose not to separate families while enforcing immigration policy,” he said.

“Not being political to remind the U.S. Attorney General that quoting the Book of Romans is fine, but ‘…as you do unto the least of these, you do unto me’ is probably a more apt guidance for this situation,” Wright said.

Rhode Island Bishop Nicholas Knisely issued the following statement on June 19: “The Trump administration’s new policy of separating children from their asylum-seeking parents is morally wrong, not in keeping with the teachings of Christianity or other world religions, and should stop.

“Jesus, reiterating the witness of Hebrew and Christian scriptures, calls on us to treat others as we would want to be treated. Jesus commands us to love our neighbor. Christians are called, with many others, to welcome the stranger in our midst. Jesus tells us in St. Matthew’s Gospel (18:4-6), that whoever welcomes a child, welcomes him. And whoever causes harm to such a one is in grave moral danger.

“I join my voice with other faith and community leaders around this state and this country in calling for the current family separation policy to end immediately and for children to be reunited with their parents as their lawful application for asylum proceeds,” Knisely said.

And from the Diocese of Texas: “Families are the bedrock of American society, and our government has the discretion to ensure that young children are not separated from their mothers and fathers and exposed to irreparable harm and trauma. Separating babies from their mothers is not only unconscionable, it is immoral,” said Texas Bishop C. Andrew Doyle, in June 14 statement.

“Superior orders will not be an ethical defense for the legacy of pain being inflicted upon these children or the violence to families being woven into the fabric of our future. These actions do irreparable harm, are not proportional to the crime, betray our covenant with God in both the Old and New Testaments, subvert American family values, and are patently inhumane,” Doyle said.