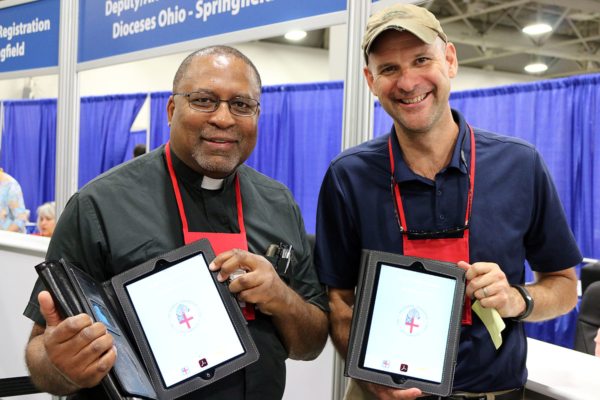 Diocese of Newark deputies, from left, the Rev. Joseph Harmon and the Rev. John Mennell show off the loaner iPads assigned to all deputies and bishops for the Salt Lake City meeting of General Convention in 2015. They contain a “Virtual Binder,” which electronically replaces most of convention’s until then-traditional paper systems. Photo: Nina Nicholson/Diocese of Newark

[Episcopal News Service] It used to be that General Convention conducted all of its legislative business on paper – approximately 1.2 million pieces of paper in 2012. No more.

For the second convention running, each deputy, alternate deputy and bishop, upon arrival in Austin, Texas, for the 79th General Convention, will get a loaner iPad to use as a “Virtual Binder.” The iPads being used during the July 5-13 gathering are newer and faster than the ones the General Convention office rented in 2015. 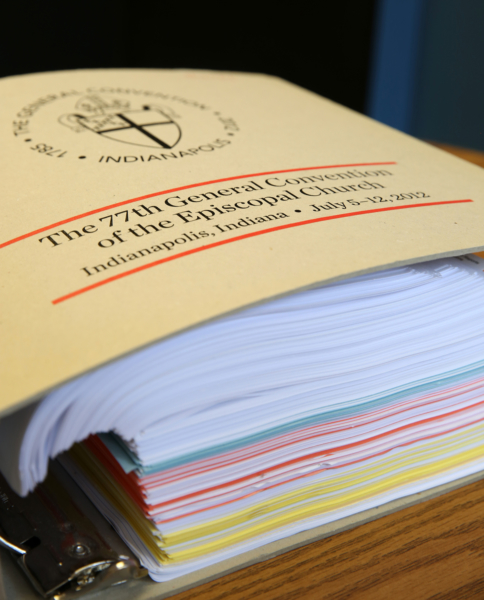 The last time bishops and deputies used actual binders to keep track of General Convention legislative action was in 2012 for the 77th meeting of convention. Photo: Julie Murray/Diocese of Southern Ohio

Replacing each actual binder with the digital system will save the cost of the estimated 2,400 reams of paper, which amounted to about six tons, plus the copying costs. Convention veterans recall an actual binder that they gradually filled with their copies as the gathering progressed, often to the point where some used wheeled bags to transport their binders. “Click time” was set aside in each house for bishops and deputies to update their binders. Tracking the progress of resolutions was impossible for people who did not attend convention. No more.

Moreover, not only have the Virtual Binder’s functions been improved and expanded for greater access across the church, but the system has made the Episcopal Church and the General Convention innovative leaders in the business of legislation tracking. There is also the prospect of sharing and licensing the system’s basic architecture to other groups.

The Virtual Binder is an app that runs on the bishops’ and deputies’ iPads, and can be accessed online. Those without a General Convention iPad can access the online version here. That latter version mirrors the app running on the iPads and changes along with it in real time.

No matter how it is accessed, the 2018 edition of the Virtual Binder enables users to track the progress of convention resolutions. It also includes each house’s daily agendas, calendars for each day and journals (a list of messages sent between the houses informing the other of actions taken), committee calendars and reports. It contains tabs for checking on current action and floor amendments in each house.

The virtual binder for the 79th meeting of General Convention features new search possibilities and ways to track legislation in both houses. To switch between houses, or for Spanish, click the gear icon at the upper right. Photo: Mary Frances Schjonberg/Episcopal News Service

All in all, “this is exactly what the bishops and deputies are seeing on their iPads,” Twila Rios, manager of digital information systems in the convention office, told Episcopal News Service. “It’s replicated in real time which means there’s nanoseconds’ difference between what’s out there and what’s in here – something that human beings can’t register.”

“The most important thing is that within the budget constraints, which is what everybody in the church has to operate on, the new features are all in response to the questions and the feedback we received after the last General Convention,” said the Rev. Michael Barlowe, executive officer of the General Convention, in an interview with ENS.

The 2018 edition of the binder includes these major changes: 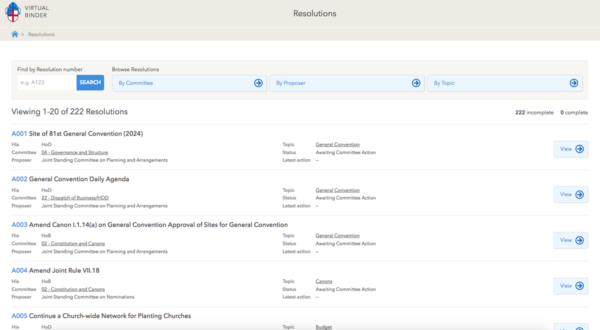 Current versions of every resolutions to be considered by General Convention are available via the Virtual Binder. Photo: Mary Frances Schjonberg/Episcopal News Service

The Virtual Binder is the public-facing portion of a multilayered system known as the Legislative Processing Online System that the General Convention Office developed with the help of E-accent, a software developer, according to Rios.

“There’s not a lot of legislative software out there. There’s a limited set of vendors and a limited number of customers,” she said, explaining that government entities are the main users.

The General Convention Office took “a high risk that paid off” to make the switch to digital systems in the run-up to the 2015 convention, Barlowe said. “We actually invented this. No one had done anything like this in the legislative world.”

E-accent “took our ideas and created this thing,” he said, calling his staff the architects and the software developer the engineers.

The Virtual Binder and all of the other systems that mesh to make convention run smoothly require a lot of bandwidth, and Barlowe said the Episcopal Church’s director of information technology, Darvin Darling, and his staff have helped his office with some “innovative ways that we can do more within the same bandwidth.”

Both at the Salt Palace in Salt Lake City where convention met in 2015 and now at the Austin Convention Center, the buildings’ technical-support people, he said, “were fascinated by what we were doing, too.”

“That’s really a tip of the hat to the Episcopal Church and the General Convention Office that, even in a place like Austin which is pretty cutting-edge technologically, techies are interested in what we’re doing,” Barlowe said, referring to Austin’s annual South by Southwest event.

The Virtual Binder app and its connected systems are also what Barlowe described as an exercise in “ethical software.” Its developers don’t exploit their workers and General Convention meets or exceeds U.S. and European privacy rules.

“The longer term hope” is that the General Convention Office can find ways to share the systems with dioceses and other denominations, Barlowe said. There have already been conversations with the Evangelical Lutheran Church in America, for instance.

If the church has been an innovator in software, it has also led the market in the type of hardware convention needs. When Rios was looking to rent 1,200 tablets prior to the 2015 convention for the members of both houses plus the other administrative people who would need them, she discovered it was an unusual request. Also unusual was her request that the iPads be “custom imaged” with the General Convention’s apps.

“We were a new thing to the vendors,” she said.

In fact, the vendor, Meeting Tomorrow, now uses the idea of “custom imaged” iPads as part of its sales pitch. And E-accent, which will have staffers at General Convention, uses its work for the Episcopal Church to showcase its business.

The systems, Rios said, are constantly being refined and update. “It’s a work in progress,” she said. 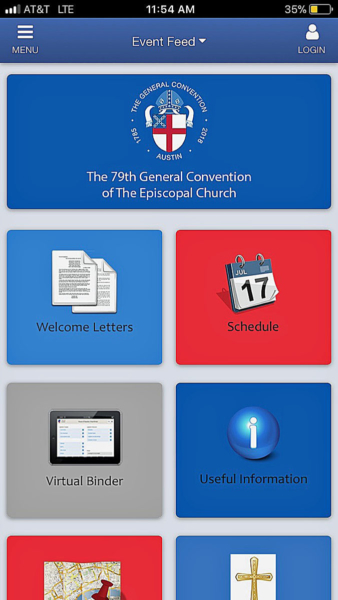 Some limitations are financial, and some are technological, she and Barlowe said. For instance, some people asked for the ability for individual bishops and deputies to message each other from their iPads. Adding the infrastructure to meet that request “was beyond our financial capacity,” Barlowe said.

A free General Convention app is available for anyone using a smartphone or tablet running Android 4.4 or iOS 8.0 or later. The app contains General Convention schedules, maps, vendor information, daily orders of worship services and other useful materials. (Complete orders of service for convention’s daily Eucharists are also included on the iPads, thus eliminating the need to print hundreds of worship booklets daily.)

Download the app here or from the App Store or Google Play, and then enter the code 79GC when prompted. The app can also be used on a computer. That link is here.