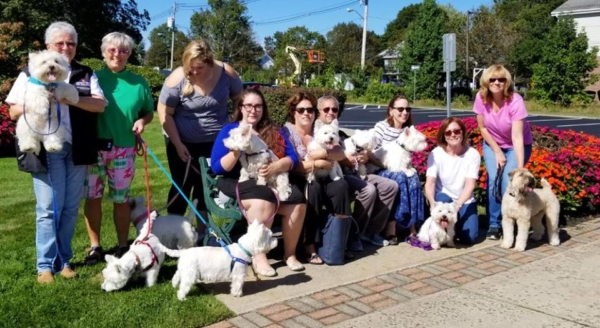 The Perfect Paws Pet Ministry at All Saints Episcopal Church in Danvers, Massachusetts, hosted a meeting of the West Highland White Terrier Club in September.

[Episcopal News Service] The Lord God made them all, the creatures of the world great and small, and God’s smaller creatures are getting a helping hand from the numerous Episcopal congregations around the country with pet outreach in their lineup of parish ministries.

Pets are the focus, but such outreach would more precisely be described as serving the needs of human members of the congregations’ communities who struggle financially with taking care of their pets. AniMeals, for example, was created about 20 years ago out of concern for older and low-income residents forced to decide between self-care and pet care.

“Instead of buying food for themselves, they were buying food for their animals and depriving themselves of that nutrition,” said the Rev. John Heschle, the longtime rector of St. Paul’s. The AniMeals “pet food café” now draws 15 to 25 pet owners every third Saturday of the month.

One of the simplest pet ministries can be found in Episcopal churches across the country: Annual services offering pet blessings have become commonplace and typically are held in early October around the Feast Day of St. Francis of Assisi, patron saint of animals. Such services were relatively new in metro Chicago in the late 1990s when St. Paul’s held its first pet blessing service, which soon grew into the AniMeals ministry.

Some churches, though, take pet outreach a step further. The Episcopal Church Asset Map, though not a comprehensive listing, shows at least a dozen congregations that offer some form of concerted pet ministry, from the pet supplies collections led by St. Andrew’s Episcopal Church in Waterford, Michigan, to the fundraisers that St. Jude’s Episcopal Church in Niceville, Florida, holds to support a local no-kill shelter. 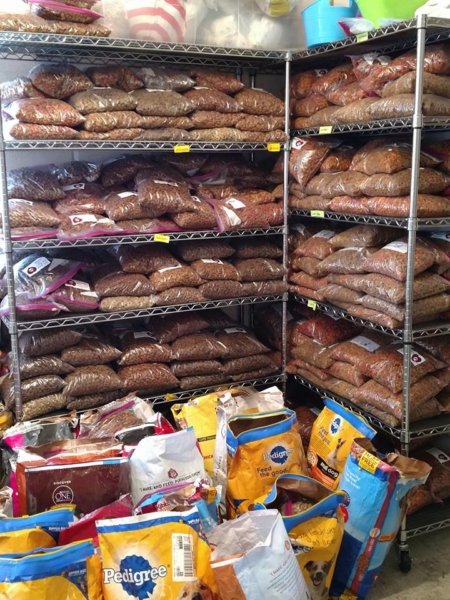 Several churches run their own pet food pantries – think of it like a church food pantry but for pets – such as St. Mark’s Episcopal Church in Johnstown, Pennsylvania, and St. Andrew’s in New Mexico.

“There’s a whole lot of us there that are big pet lovers, and we saw the need in Roswell,” said Enid Smith, who helps organize the Four Paws Pet Pantry at St. Andrew’s. “People were having to decide if they could keep a pet or not.”

The pet food pantry was created about two years ago and now serves 70 to 80 pet owners on the third Wednesday each month. The congregation has rallied behind the new ministry, and some local school groups have volunteered to help as service projects.

“I just feel like it’s both community and church,” Smith said. “We’re really helping a lot of people in the community.”

St. Aidan’s Episcopal Church in Alden, New York, created its Pet Food Cupboard about four years ago and runs it out of the church basement. The congregation, directly east of Buffalo, chose the name “cupboard” to clearly differentiate it from its food pantry, said James Wojcik, who organizes the Pet Food Cupboard with his wife, Christine.

“We were volunteering for the food pantry here at the church, and every so often a veterinarian or some people who were donating things would donate some pet food,” James Wojcik, 78, told Episcopal News Service. They began offering the pet food on pantry days, “and pretty soon people started asking for it.”

Now the pet ministry has grown to serve 70 people or more on the second Saturday of each month. Wojcik estimates they give out up to 300 pounds of cat food and 200 pounds of dog food a month. They also sometimes distribute cat litter. They don’t have any income or residency requirements for recipients, and no one is denied the pet supplies.

Clients of AniMeals in Chicago’s Rogers Park neighborhood can get more than just food and supplies. Its volunteer veterinarians also will spay or neuter pets, as needed, and even offer microchipping in case the pets get lost.

St. Paul’s requires pet owners who visit AniMeals to meet income requirements showing financial need, though clients don’t need to be a church member or Episcopalian. Some choose to come back to attend attending church services, but it’s not expected.

“That’s not our primary reason for doing this,” Heschle said. “It really was to meet sort of a need that we saw in the neighborhood.”

These ministries often are driven by the congregation members’ love of animals. What else but love would compel a ministry like Perfect Paws in Danvers, Massachusetts, to host a presentation on dog body language for owners of white terriers on the church green?

Heschle’s congregation goes as far as to set out food and water in dishes between the rectory and church building, for any feral cats roaming the neighborhood. Those cats are then trapped so they can be spayed and neutered.

Wojcik and his wife have two dogs of their own, a hound and a boxer, both shelter dogs.

“We always have been pet lovers,” he said, though he sees a greater purpose in the Pet Food Cupboard at St. Aidan’s. “It’s like the letter of James: Faith without good works is kind of hollow.”