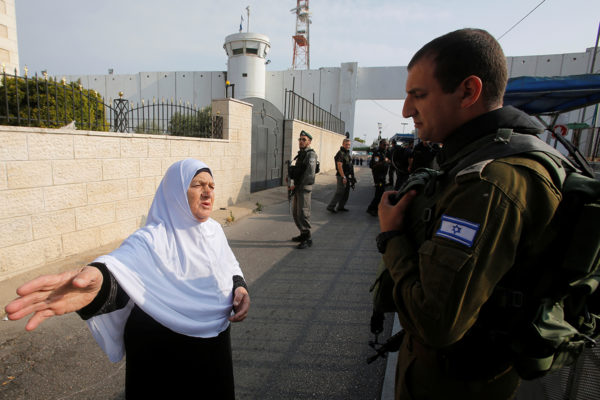 A Palestinian woman makes her way June 1 through an Israeli checkpoint in Bethlehem in the occupied West Bank to attend Friday prayer of the holy fasting month of Ramadan in Jerusalem’s Al-Aqsa Mosque. Photo: Reuters

[Episcopal News Service] A group of bishops and deputies who were asked to find a way to navigate the often-thorny discussions of Episcopal Church policy toward Israel and Palestine has announced its recommendations for fostering open and productive debate on those issues at General Convention this July.

Five bishops and five members of the House of Deputies served on the Israel and Palestine Working Group, which was formed last year by Presiding Bishop Michael Curry and the Rev. Gay Clark Jennings, House of Deputies president. Curry and Jennings have accepted the working group’s three core recommendations, according to an email to members of the two houses sent May 31 by the Rev. Michael Barlowe, General Convention’s executive officer.

“Members of the working group were not asked to guide General Convention in any particular way on the underlying issues, about which members have various points of view,” Barlowe said. Instead, the 10 members issued the following recommendations to enable “a prayerful, thoughtful and respectful engagement that facilitates genuine discernment”:

“I am so grateful to the task force for their work,” Curry said in an emailed statement. “Their work will make it possible for the convention to have a thoughtful, prayerful discussion and consideration of the humanitarian concerns in Israel Palestine. In so doing may we pray and work for the peace of Jerusalem.”

Jennings alluded to the challenges ahead in a written statement.

“We’ve got some hard conversations about the Holy Land ahead of us at General Convention,” she said. “I’m grateful to the deputies and bishops of the Israel and Palestine Working Group for recommending a structure that will help us have those conversations in ways that are respectful, substantive and representative of the wide range of Episcopalians’ experiences and opinions.”

Beginning the debate in the House of Deputies, which is a larger and more diverse body, will help ensure a broader debate, said the Rev. Brian Grieves, a member of the House of Deputies who served on the Israel and Palestine Working Group. Both houses have an interest in moving this debate forward.

Underlying the working group’s deliberations was the imperative to “have a discussion that is open and respectful and transparent in the process,” Grieves told Episcopal News Service. “Because there have been concerns in the past that it has not been. Things got bottled up in committees.”

General Convention has voted in support of Middle East peace for decades; however, the question of whether to apply more forceful economic pressure on Israel for its occupation of the Palestinian Territories has been a hot-button issue in recent years. In 2012, the bishops joined deputies in approving a resolution in favor of “positive investment” in the region as part of a show of support for peace among Jews, Muslims and Christians in the Holy Land, but the two houses were unable to agree on a second resolution calling for greater engagement in corporate social responsibility through the church’s investment portfolio.

At General Convention in 2015, a resolution calling on the church to divest from companies engaged in certain business with Israel failed in a vote of the House of Bishops, which meant it never made it to the House of Deputies for consideration.

Grieves, who is a member of the Stewardship and Socially Responsible Investing legislative committee in the House of Deputies, said the church already participates in corporate engagement related to Israel and Palestine based on a 2005 report by what was then known as the Executive Council’s Social Responsibility in Investments committee. That report was endorsed by Executive Council, and the results can be seen this year in church-backed shareholder resolutions seeking to influence Motorola and Caterpillar, two companies that have contracts with the Israeli government.

“I think corporate engagement has been very good, but I do think here may be a point where we as a church would end our complicity in continuing to work with these companies,” Grieves said. “I don’t know when that point should be reached. I think we need to do some careful thinking about that, and that’s part of the discussion that’s going to happen at convention.”

Numerous General Convention resolutions are expected on topics related to Israel and Palestine by the time the gathering gets underway on July 5 in Austin, Texas. At least three have been submitted so far, including one proposed by the Diocese of California that reintroduces a push for divestment from “those companies that profit from Israel’s occupation of Palestinian lands or whose products or actions support the infrastructure of the occupation.”

Corporate engagement won’t be the only topic related to the Holy Land. Two additional proposed resolutions call for greater attention to the plight of Palestinian children, including those being tried in Israeli military courts.

The Israeli-Palestinian conflict should eventually generate a greater diversity of resolutions at this General Convention, said Sarah Lawton, who chairs the Social Justice and International Policy committee for the House of Deputies. That variety is related to the number of big developments in the region in recent years, from the breakdown of the peace process to global outrage at the Trump administration moving the U.S. embassy from Tel Aviv to Jerusalem.

In the past, General Convention has sometimes debated single larger resolutions addressing multiple aspects of the conflict together, making it difficult to move forward on individual measures, but Lawton said this time should be different. “It’s not just one big resolution going forward but a number of them,” said Lawton, who also was a member of the Israel and Palestine Working Group.

Bishop Barry Beisner, another member of the working group, has submitted a resolution seeking to reaffirm the church’s stance in support of Jerusalem as an open city, where Christians, Muslims and Jews have free access to the city’s holy sites. He doesn’t expect that resolution to generate much controversy, but “there’s a broad spectrum of opinion on any number of related issues.”

Beisner emphasized the value in the list of resources assembled by the working group, to help General Convention prepare for those discussions. And the bishops aren’t giving up their voice by agreeing to start deliberations in the House of Deputies, he said.

“It will help to expedite the consideration of these resolutions to have them all under that one tent initially,” said Beisner, who serves on the Social Justice and International Policy committee.

With so many issues at stake, Lawton thinks people on all sides of these debates have an interest in avoiding the procedural pratfalls that can lead to inaction.

“We’ve had a hard time with this conversation [about Israel and Palestine]. One of the ways that it was hard was played out in the process,” she said. “These are important issues, and we should be able to speak to them and not feel afraid to say something.”