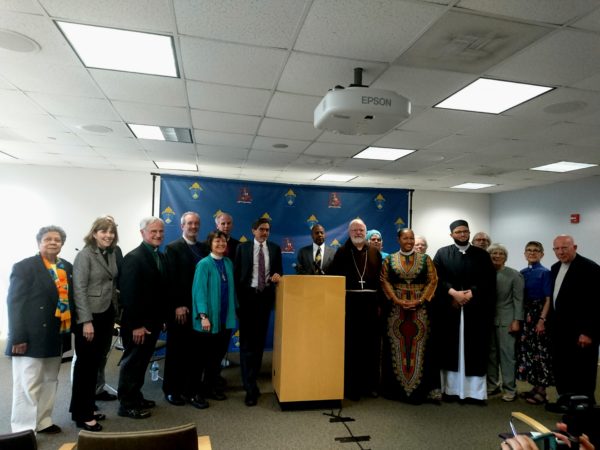 A group of faith leaders and scientists hold a press conference on May 23 to announce a joint appeal on climate action. Photo: Episcopal Diocese of Western Massachusetts

More than 500 leaders from religious and scientific communities in Massachusetts have endorsed the Faith and Science Joint Appeal for Climate Action, which declares, “Climate change is an ecological and moral emergency that impacts all other aspects of our shared lives and requires us to work together to protect our common home.”

The statement says, “All of us … must do our utmost to reduce greenhouse gas emissions and to protect our communities from the catastrophic impacts of climate change. We especially call upon our political representatives to address the climate crisis with the boldness and urgency it requires, with substantive and immediate action.”

The release of the joint appeal is a significant first step in an extraordinary, even unprecedented, alliance between religion and science. Initiated by Phil Duffy, president of the Woods Hole Research Center, who reached out to O’Malley, this emerging coalition of faith leaders and scientists intends to give a robust push to the effort of preserving a livable planet.

As I wrote in a February blog post after attending the first meeting of religious leaders and scientists, which was held at the Pastoral Center of the Archdiocese of Boston, “Such a partnership has enormous potential in this perilous time. In fact, such a partnership may be not just desirable, but even essential. Given the massive disruption of our global climate that is now underway, we need to hear from scientists, who have made it abundantly clear that continuing to burn fossil fuels will lead in a very short time to climate catastrophe. We also need to hear from spiritual and religious leaders, who can give us the inspiration, motivation, and moral courage to change course and to create a more just and life-sustaining society.”

The joint appeal was released on the third anniversary of the publication of “Laudato Si’: On Care for Our Common Home,” the landmark encyclical written by Pope Francis. “Laudato Si’” is addressed to “every person living on this planet” and calls for our urgent response to “the cry of the Earth and the cry of the poor.”

Fisher commented that, “As followers of Jesus, we seek to build a society that is marked by mercy, justice, and hope. The only way to love God and our neighbor is to preserve the conditions that allow life on Earth to flourish, which begins with a habitable climate. Our emerging coalition of faith and science illuminates a basic truth: climate disruption is not only a scientific issue, but also a deeply spiritual and moral issue.”

Gates commented, “This coalition is a strong rebuttal of three all-too-commonly-held fallacies: that faith and science do not align (they do!); that climate change is a partisan political issue (it is not!); and that we have plenty of time to figure out solutions to this crisis (we don’t!). I am grateful for the opportunity to move beyond these misjudgments and get on with the work that our stewardship of God’s Creation demands.”

Another religious leader who attended the May 23 press conference stepped forward to offer a few impromptu, impassioned remarks. The Rev. Jim Antal, who leads the Massachusetts Conference, United Church of Christ (and who, with Fisher, oversees my ecumenical appointment as missioner for creation care), pointed out that religious communities have plenty of room for improvement when it comes to raising awareness about the urgency of stabilizing our planetary climate. How often do we preach about climate change? How often do we give our congregations opportunities to learn climate science and to discuss the issue from a religious and spiritual perspective? He cited the latest research from the Yale Program on Climate Communication (“Climate Change and the American Mind: March 2018”), which shows that although 70 percent of Americans understand that climate change is real and largely caused by human activities, 65 percent of Americans never talk about it. And only 13 percent consider climate change to be a religious issue.

Now that the joint appeal has been issued, members of our emerging coalition of faith and science are meeting May 30 to discuss next steps. I view this initiative as strong encouragement to Episcopal congregations to learn about climate science, to engage in conversations about climate change as a moral and spiritual concern, and to take effective action. In order to protect “our common home” and to break our dependence on fossil fuels, Americans need both head and heart. Facts and reason alone will not motivate us to change course; we also need stories, prayer, and ceremonies, the power of imagination and a vision of hope. Together with scientists, we can speak with one voice about the sacredness of God’s Creation and the moral imperative to protect it.