The Rev. Jim Wallis, second from left, and Presiding Bishop Michael Curry lead fellow clergy in a vigil titled “Reclaiming the Integrity of Faith During Political and Moral Crisis” as they process to the White House. Bishop Carroll Baltimore of the Global Alliance and Interfaith Network is on the far left. Curry is flanked by Sharon Jones, his executive coordinator, and the Rev. Michael Hunn, his canon for ministry within the Episcopal Church. Photo: Jonathan Ernst/Reuters 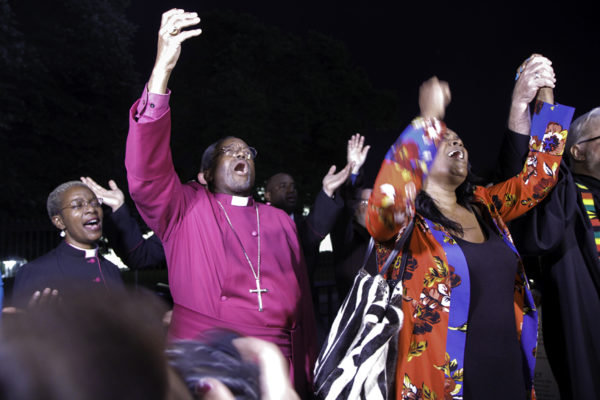 The Rev. Stephanie Spellers, canon to the presiding bishop for evangelism, reconciliation and stewardship of creation, and Presiding Bishop Michael Curry belt out the Lord’s Prayer in front of the White House on May 24. Photo: Lynette Wilson/Episcopal News Service

Curry added, “This is not a protest march, this is a procession of Christian people. This is what they did on Pentecost. This is a Pentecostal moment and we are committed to following the way of Jesus.”

During the 90-minute church service that preceded a candlelight procession to the White House, one by one speakers addressed issues ranging from the rise of white nationalism to mistreatment of and violence against women, to LGBTQ inclusion to immigration reform, the spreading of falsehoods and the normalization of lying and moves toward autocratic leadership.

“The Reclaiming Jesus declaration says that we believe there are two things are at stake: the soul of the nation and the integrity of our faith,” said the Rev. Jim Wallis of Sojourners, who co-led the service and the procession alongside Curry. “Why do we say that? Because we love our country and we love our churches even more. We see people bringing politics into faith. Tonight, we are bringing faith into politics.

“And there’s a big difference. … The early Christians did everything they did in the name of Jesus, not in the name of their churches or organizations.

“This is not tonight about Donald Trump, it’s about Jesus Christ.”

The service and procession of public witness were part of “Reclaiming Jesus: A Confession of Faith in a Time of Crisis,” an ecumenical Christian elders’ initiative launched in March to “reclaim Jesus” from those believed to be using Christian theology for political gain. 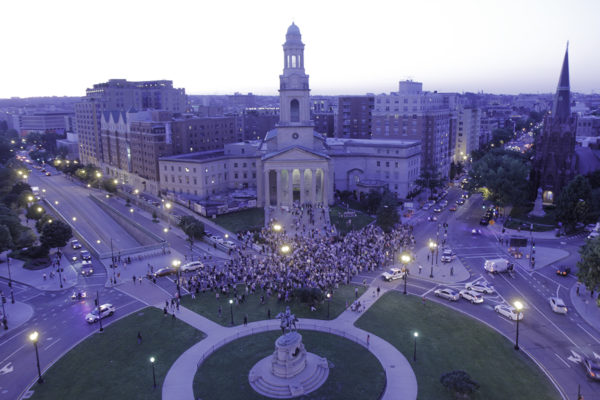 In total, more than a thousand people processed in public witness by candlelight from National City Christian Church to the White House, where they reassembled across the street in Lafayette Square Park and sang “This Little Light of Mine” before crossing the street to stand on the sidewalk directly in front of the White House. 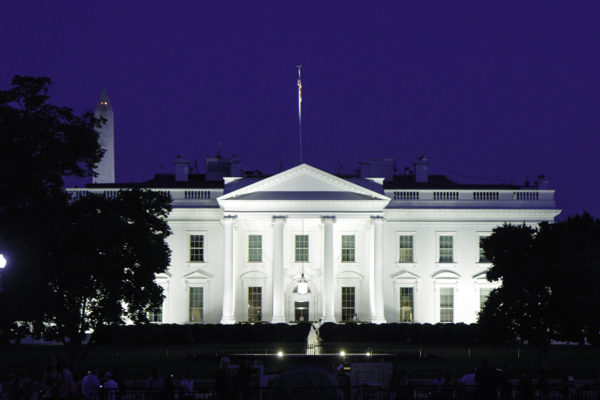 The White House is illuminated on May 24 as more than 1,000 Christian witnesses hold a candlelight vigil outside President Donald J. Trump’s residence at 1600 Pennsylvania Ave. as part of “Reclaim Jesus: A Confession of Faith in a Time of Crisis.” Photo: Lynette Wilson/Episcopal News Service

The events in Washington followed last weekend’s royal wedding, where Curry delivered a sermon on the power of love at St. George’s Chapel in Windsor, garnering him international attention.

Since the wedding, Curry has become an international sensation, appearing on everything from the BBC to TMZ, with stories about him in The New Yorker, Esquire and Vanity Fair and a parody of him on “Saturday Night Live.”

During a May 25 event at the National Press Club, Wallis said God used a royal wedding to get people to start talking about Jesus, before turning the podium over to the presiding bishop.

“The truth is, I suspect, what began to happen last night and has been building and is just beginning is maybe we are helping – no, maybe the spirit is helping the church to re-center itself and its voice on Jesus,” said Curry.

“Maybe the spirit is helping us to reclaim Christianity, not as ideology, not as anybody’s political party. Jesus can’t be bought. But to re-center Christianity and have it named and heard and understood as grounded in the teachings of Jesus, who said blessed are the poor, blessed are the poor in spirit, the Jesus who taught us love God and love your neighbor, the Jesus of the parable of the Good Samaritan … to re-center ourselves on this Jesus.

“And as that happens, not in high lofty terms, as that happens to the average Christian, the average person sitting in churches, Protestant, Catholic, evangelical, I dare say they become the movement that actually can move forward.”

Since its release, other Christian leaders have requested to sign on to the statement, and more than 2 million people worldwide have accessed it. The elders conceived of it as a tool for discipleship intended to move people to the streets in their own communities.

In an interview with Episcopal News Service on May 25 following the press club event, Curry encouraged Episcopalians to study and reflect on the Reclaim Jesus declaration and study materials.

“It’s a document worth studying, it’s grounded in scripture, it’s based in theology, it’s an attempt to articulate some of the core Christian beliefs that have to do with our values and our values having their origin in the teachings and spirit of Jesus,” he said.

Adult formation, Bible studies and other groups can use the document and the study guide to come to areas of agreement and disagreement and to reflect on them.

“This is not the word from on high, but it can be used to help people identify what are the core Christian beliefs that actually matter in my life, and how do I live them out following the teachings of Jesus,” he said. “And then what action steps will I take, what actions steps will we take to be witnesses to this way of following Jesus in our lives.

“And so, my hope is that our folk will take it and study it and reflect on it, pray on it, and then decide what are we going to do about it?” 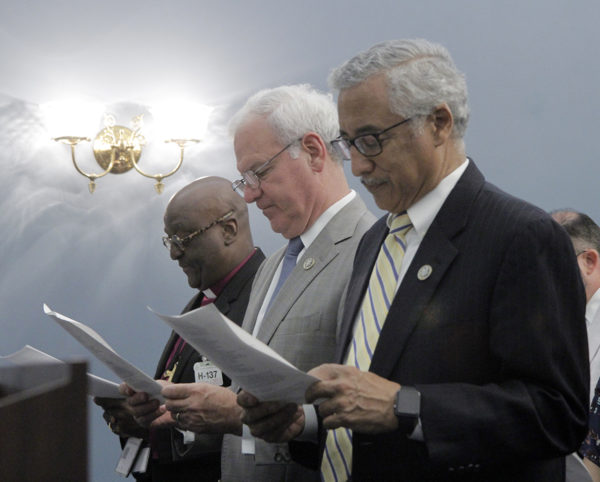 The previous day began at the U.S. Capitol, where Curry led a packed room in a bipartisan Morning Prayer, organized by the Office of Government Relations and co-hosted by Republican Rep. Bradley Byrne of Alabama and Democratic Rep. Bobby Scott of Virginia, both Episcopalians.

Today, at least 38 of the 535 citizens serving in Congress identify as Episcopalians: 22 Republicans and 16 Democrats. In November 2017, Episcopal News Service interviewed several Episcopalians who serve in Congress to report on the range of ways faith influences lawmakers’ public service.

Nine senators and representatives attended Morning Prayer. Afterward, the presiding bishop met with lawmakers from both parties to highlight the church’s advocacy and to share its perspective on civil discourse.

“Our advocacy begins with our values as Episcopalians – values of caring for the most vulnerable among us and respecting the dignity of every human being, including those we disagree with,” said Rebecca Linder Blachly, director of the Washington, D.C.-based Office of Government Relations. “There is tremendous diversity within the Episcopal Church, and that is one of our strengths: despite these differences, we still worship together. At our best, we strive to connect despite profound political differences.”

In meetings with members of Congress, the presiding bishop spoke about the need to come together in diversity on issues relating to immigration, poverty and criminal justice reform. 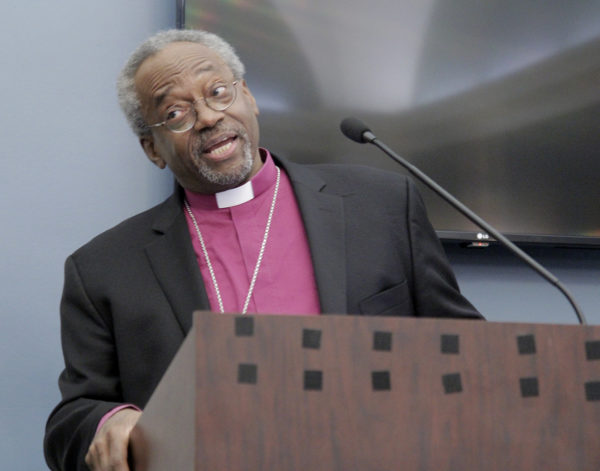 Presiding Bishop Michael Curry leads a bipartisan group of members of Congress and their staffs in Morning Prayer at the Capitol on May 24. Photo: Lynette Wilson/Episcopal News Service

“We think it’s imperative that we use our influence as a church to encourage our lawmakers to develop more just and human policies and that happens in and through relationships,” Blachly said. “At the Office of Government Relations, we share the perspective and positions of the Church and seek to find ways to work together. We work hard to build and maintain honest relationships based in dialogue and respect.”