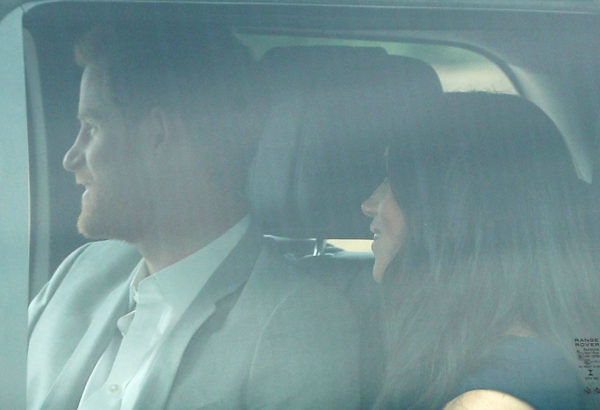 Prince Harry and Meghan Markle arrive at Windsor Castle on May 18, a day ahead of their wedding. Photo: REUTERS/Hannah McKay

[Episcopal News Service] With all due respect to the bride and groom, the preacher will be the real star of the royal wedding in the eyes of many Episcopalians.

Congregations across the United States are planning viewing parties, and there’s even a bingo card created by the Diocese of Fort Worth featuring some of the phrases Presiding Bishop Michael Curry is expected to deploy when he preaches at the wedding of Prince Harry, the grandson of Queen Elizabeth II and sixth in line to the British throne, and American actress Meghan Markle at St. George’s Chapel in Windsor Castle on May 19.

It’s hard to deny “this huge opportunity for evangelism that just landed in all our laps,” said Katie Sherrod, Diocese of Fort Worth communications director.

She was part of the team that came up with the “Michael Curry Bingo” card based on what Episcopalians have come to expect in a typical Curry sermon, such as references to the “Jesus Movement” and “loving, liberating and life-giving.” But will he change things up for the royal couple?

“It is a wedding, so we know he’s going to be talking about love,” Sherrod said. “I just can’t imagine him not going to ‘We are all beloved children of God,’ a message that the world is desperate to hear.”

Live coverage of the royal wedding can be viewed online via PBS here and BBC America here. On Episcopal social media, follow the event on Facebook, Twitter and Instagram. Full Episcopal News Service coverage can be found here.

Kensington Palace announced May 12 that the couple invited Curry to preach at the service, a departure from tradition for British royal weddings where sermons are usually given by senior Church of England clergy. Dean of Windsor David Conner will conduct the service and Archbishop of Canterbury Justin Welby will officiate.

The doors of the Episcopal Church of the Advocate in Chapel Hill, North Carolina, will open at 6:30 a.m. Eastern time, a half-hour before the noon wedding begins in England. As soon as the news of Curry’s address went public, the church’s senior warden said, “‘We have to have a party,’” said the Rev. Lisa G. Fischbeck, vicar.

“There’s this really funny blend of dread at getting up that early on a Saturday and excitement,” she said. Women are invited to wear hats and men ascots, and tea and coffee and scones and strawberries will be served.

“It’s splendid. … There seems to be such excitement about it from Episcopalians who are wondering whether he’ll stay in the pulpit, and wondering if he’ll stay to seven minutes, to have this joyful buzz,” said Fischbeck, who appeared live on BBC News earlier this week.

Grace Cathedral in San Francisco plans to host a short carillon concert at noon local time (after the royal wedding) to celebrate the newly married couple. “We love weddings,” the cathedral says on its website, though the Rev. Ellen Clark-King acknowledged to Episcopal News Service that this is no ordinary wedding, especially for members of her congregation.

“I would say the interest has definitely gone up since we knew about Bishop Michael’s involvement in the proceedings,” said Clark-King, who is the cathedral’s executive pastor and canon for social justice. “A lot of people who would not be particularly interested in a royal wedding want to know what he has to say.”

On the other side of the United States, St. Bart’s Episcopal Church in New York City plans to hold a “Royal Wedding Brunch” for those who don’t want to wake up early to watch Curry’s sermon live. A recording of the wedding will be shown at 1 p.m. accompanied by sandwiches, cookies and tea.

The Diocese of Fort Worth started thinking about opportunities for evangelism as soon as Curry was announced as preacher. The diocese had seen a surge in visits to its website in April when former first lady Barbara Bush’s funeral was held at an Episcopal church in an adjacent diocese. The diocese received 25,000 clicks just on its page outlining what Episcopalians believe.

“If Barbara Bush’s funeral did that, what is the royal wedding going to do?” Sherrod said.

In 2015, when Curry was installed as presiding bishop, Sherrod’s team produced an infographic based on a fun list of 10 things you typically hear in one of his sermons released by the Diocese of  North Carolina where Curry served as diocesan bishop. In preparation for the royal wedding, Fort Worth dusted off the infographic and came up with the idea of expanding it into a bingo card. As of May 18, the diocese’s post promoting the bingo card had been shared more than 200 times.

The challenge of writing a wedding sermon isn’t quite the same as writing a sermon for Holy Eucharist on Sunday, but Sherrod thinks Curry’s regular emphasis on God’s love will be a common thread.

“He is such a genuine man of such integrity that I can’t imagine he’s going to change very much,” Sherrod said. “I think they are very lucky to have him as a preacher.”

She also has been working with congregations to ensure their websites are updated and informative for people who might be interested in learning more about the Episcopal Church after hearing Curry speak.

“The next day is Pentecost, so it’s not like people aren’t busy around here, but I just think this is an opportunity to reach people who are hungry for the message Michael Curry is bound to deliver to them,” she said.