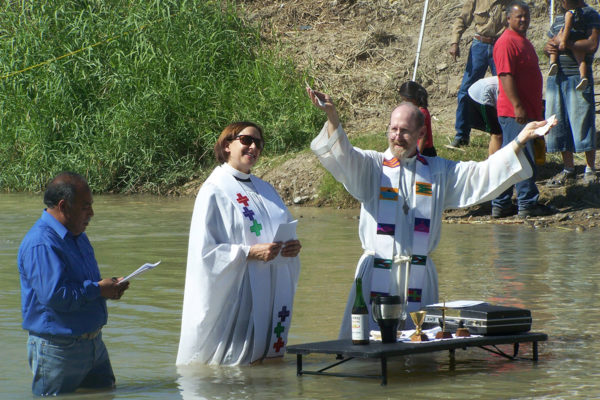 The Rev. Paul Moore presides at Holy Eucharist in the middle of the Rio Grande on May 11, 2017, in Lajitas, Texas, at the Voices From Both Sides event. Moore was joined by the Rev. Sarah Guck. Photo courtesy of Paul Moore

[Episcopal News Service] When the tiny border community of Lajitas, Texas, celebrates Holy Eucharist on May 12, the Rev. Paul Moore will consecrate the bread and wine standing in the middle of the Rio Grande, with water soaking the bottom of his vestments and without a clear sense of whether his feet are planted on the American side or the Mexican side.

This is the second year that Moore, an Episcopal priest from Silver City, New Mexico, will preside over a Eucharist in the river as part of the Voices From Both Sides celebration, an annual event that serves as a kind of community reunion for people from both sides of the border.

“For me, it was a statement that borders are political, not spiritual, realities,” Moore told Episcopal News Service. “That people in the church are joined and are one.”

The U.S. government previously declined to actively patrol the Lajitas Crossing, and Mexicans and Americans passed freely across the river to visit relatives, shop, attend school and work. That changed on Mother’s Day weekend in 2002, when U.S. authorities detained 20 people on immigration charges and made clear they were ending the open passage as part of an effort to secure the border after the Sept. 11, 2001, terror attacks. Now, anyone entering the U.S. by crossing the river at Lajitas risks arrest.

Except on this one day.

Starting in 2013, the organizers of Voices From Both Sides arranged for federal and local authorities to bend the rules a little for a few hours, allowing for this border-straddling party, with music, food, drinks and religious worship.

“The organizations have kept us informed since the beginning, and basically no one is crossing the border, so no laws are being broken,” Bill Brooks, a U.S. Customs and Border Protection spokesman, told the San Antonio Express-News in 2015 in a story about the third Voices From Both Sides. 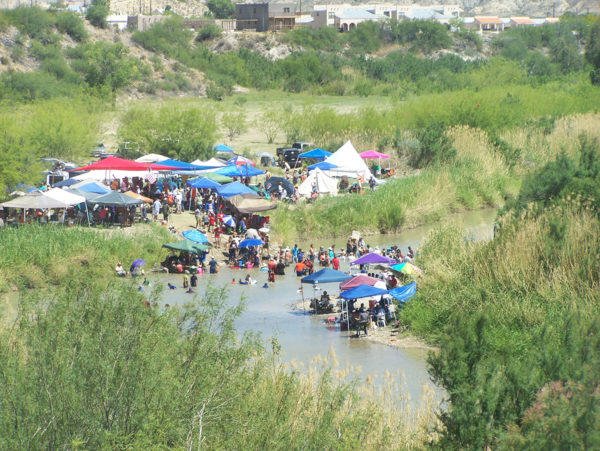 The 2017 Voices From Both Sides is seen spread out on the U.S. and Mexican sides of the border. Photo courtesy of Paul Moore

People from both sides meet in the middle of the river but end the day back on the side where they live.

“I hope it continues to keep on, because it’s just a day,” said Marcy Reed, an Episcopalian who lives about 15 minutes away in Terlingua, Texas.

She and her husband are teachers at the school in Terlingua, and some of their students have family members back in Mexico. Voices From Both Sides is a way for those relatives and friends to reconnect without having to drive hours out of their way, Reed said.

“I was really nervous last year with Trump in office,” Reed said. Would President Donald Trump’s tougher stance on immigration mean an end to Voices From Both Sides? “I really wasn’t sure it was going to happen. It still did.”

She wasn’t able to make it last year to participate in the service led by Moore, but she hopes to be there this time. Moore, rector of Church of the Good Shepherd, is fluent in Spanish and will preside over a bilingual Eucharist, with help from the Rev. Sarah Guck, assistant rector at Good Shepherd.

Last year, the Episcopal service was first on the day’s lineup at 10:30 a.m., which meant the sound system hadn’t been set up yet and only about 150 to 200 people had arrived for the day’s festivities. Even so, about 30 people from both sides of the river received communion.

This year, Moore is expecting an even bigger turnout for the Eucharist, which is scheduled for 11:30 a.m.

“We’d love to have more people join us,” he said.

In addition to his parish duties, Moore is chair of Rio Grande Borderland Ministries. The Diocese of the Rio Grande is the largest among the contiguous 48 state and covers 800 miles of border in Texas and New Mexico. Moore’s church is about 90 miles away from Mexico, and he works with other churches along the border on a unified ministry that “focuses on the needs of the border in every way,” he said.

The church is engaged on issues like poverty and hunger, Moore said, as well as immigration. He’s gearing up for an eight-hour drive to Lajitas on May 11, bringing with him on the long journey a Christian message that Jesus’ love transcends international borders. 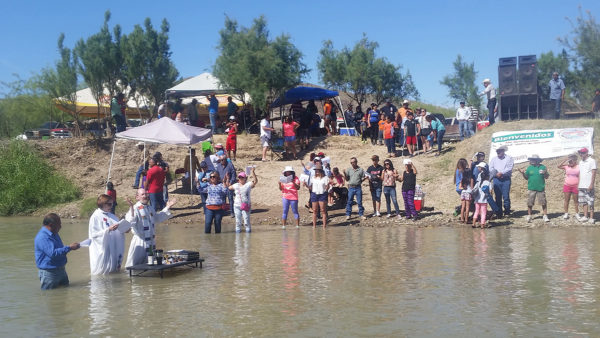 About 30 people received communion during the Eucharist at the 2017 Voices From Both Sides. Photo courtesy of Paul Moore

Residents of the Big Bend region of Texas, however, also are divided by and forced to overcome great geographic distances. Reed and her husband sometimes drive 80 miles to attend St. James’ Episcopal Church in Alpine, Texas, because services are sporadic at Santa Inez in Terlingua. Along the way, they take advantage of the better grocery options in Alpine.

They sometimes take trips into Mexico, such as when a student invites them to a quinceañera, or 15th birthday, in San Carlos. The community of Paso Lajitas on the Mexican side of the Rio Grande has all but dried up since the river crossing closed. Now, a trip that once took a few minutes by pickup truck across the river instead takes three or four hours by way of the official border crossing to the west in Presidio, Texas.

It’s hard for Reed to imagine a terrorist using Lajitas as an entry point into the U.S. “It would be such a crazy place to cross. There’s just nothing here,” she said.

At the same time, “I don’t think anyone’s coming over here stealing anyone’s jobs in Terlingua,” she said. There aren’t a lot of jobs to steal.

Before the federal government cracked down on river crossings, the flow of people in both directions knit together the communities on both sides of the river, Reed said. The impact didn’t seem to radiate any farther.