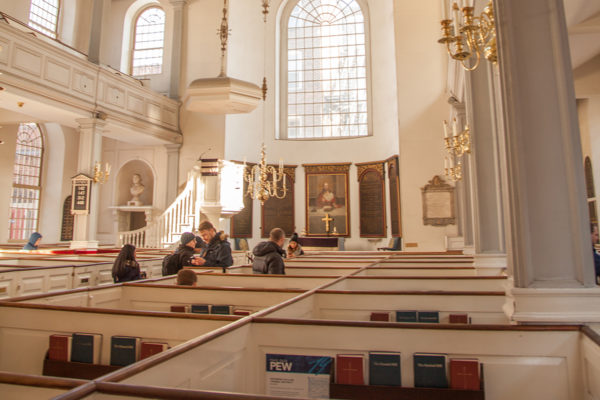 [Episcopal News Service] Planning for a half million people a year to step foot in your church may seem like a rector’s foolish pipe dream. In reality, though, Old North Church is one of Boston’s most popular tourist destinations, and it doesn’t maintain itself.

“That’s a lot of wear and tear on the building,” the Rev. Stephen Ayers said. His church, while remaining free for all who come to worship and pray, soon will begin charging admission to most of its hundreds of thousands of annual visitors. “We’ve managed as long as we can by cutting corners, but that’s not enough to keep the place going,” Ayers said.

Boston is a city steeped in Revolutionary War history, and Old North Church is one of its most treasured historical landmarks. Its stature stems from its pivotal role in Paul Revere’s famous ride on April 18, 1775, as the site of a poetic advance in lantern-based messaging – “One if by land, and two if by sea.”

Old North Church, 243 years later, is still home to a small but active Episcopal congregation. Its list of Christian ministries ranges from Bible studies to a feeding program, but historic preservation isn’t a central theme. “We want the congregation to have its own identity,” Ayers said, though there’s no denying that Old North Church’s connection to the past puts it in rare company. “It’s a pretty small group of churches that find themselves as being historical attractions as well.” 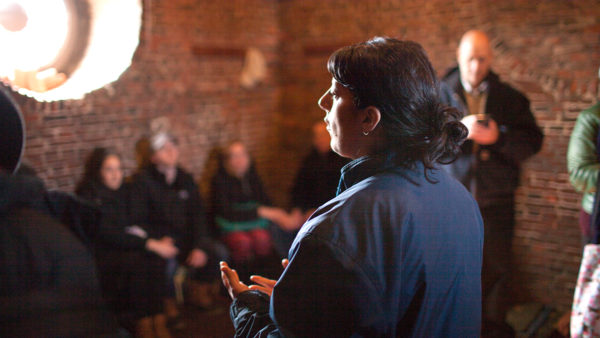 Landmark Episcopal churches make up an even smaller group, and some already have set up ticket counters for the paying public. Trinity Church in Boston, popular for its architecture, art and central location on Copley Square, has charged admission for more than a decade, except on Sunday mornings and other worship times.

“A lot goes into greeting the public and welcoming them,” said the Rev. Patrick C. Ward, associate rector at Trinity Boston. The costs of maintaining the building add up, and “the only people taking care of it are the people in the parish.”

In New York, Trinity Church Wall Street, a wealthy congregation founded in 1697, keeps its historic church, cemetery and nearby St. Paul’s Chapel open to the public for free, while the Cathedral of St. John the Divine created a $10 admission fee in September 2017. It had promoted a suggested donation for decades and also charges for guided tours of the 125-year-old building, one of the world’s largest cathedrals.

“We do not, nor will ever, require a fee from anyone coming here for private prayer, attending a worship service or seeking respite or sanctuary,” Isadora Wilkenfeld, St. John the Divine’s programming and communications manager, said in an email. “However, we’ve always relied on the contributions of visitors, supporters and the wider community as a major source of revenue.”

St. John the Divine, through a long period of research and discussion, found that an admission fee was in line with the policies at other cathedrals in the United States and Europe, including Washington National Cathedral, which began charging tourists and sightseers $12 per person in 2014.

If you cringe at the notion of making anyone pay to enter a house of worship, consider what it takes for that small group of landmark churches to invite the public inside on days of the week when many other churches around the country are closed to the public.

“We wouldn’t be able to keep our doors open on a daily basis if it weren’t for people paying a nominal fee,” said Patricia Hurley, Trinity Boston’s director of communications. The church’s $7 fee helps cover the estimated $35,000 a week it costs to keep the lights on and staff the building, including security.

The congregation is much larger than Old North Church – about 750 people attend the five Sunday services at Trinity – and though lacking Old North’s historical pedigree, it still draws up to 100,000 visitors a year. Trinity is known as one of the most significant buildings in the country because it represents the birth of a now commonplace architectural style, Richardsonian Romanesque, pioneered by H. H. Richardson.

“It’s not merely about surface prettiness. Beauty draws us out of ourselves,” Ward said, noting the connection between art and spirituality. “People coming into it from all faiths, or no faith, will say things to me like, ‘I feel embraced by this building.’”

And if faith has called someone to a church, whether the building is historic or not, church leaders are committed to removing financial barriers to entry.

“Sundays and worship services are always free, as is private prayer,” said Kevin Eckstrom, communications officer at Washington National Cathedral. “If someone comes to the front desk and says they want to light a candle or say a prayer, they can come in.”

National Cathedral draws about 275,000 visitors a year, typically attracted by its historical connection to the nation’s capital, its Gothic architecture and its spiritual significance as “a place where people can encounter the sacred in a very secular city,” Eckstrom said.

It costs an estimated $40,000 a day to keep the building open and running. After an initial adjustment period, Eckstrom said, visitors have grown accustomed to paying the admission fee, which includes a half-hour, docent-led tour of the facility.

“Part of our mission is to open the space to whoever wants to come in and hopefully have a transcendent experience that you would not get in any other place in the nation’s capital,” he said. 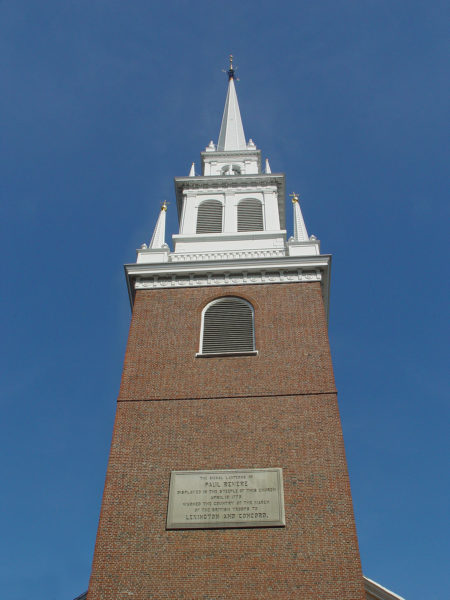 Old North Church is one of the most popular tourist stops in Boston because of the two lanterns hung in its town signaling that British were advancing by sea on April 18, 1775. Photo: Old North Church

Old North Church plans to launch its new fee policy as soon as its ticket booths arrive, possibly this month.

“We’ve done a good bit of local PR about it. Most of the response has been good,” said Ayers, whose congregation typically numbers 80 to 90 people at Old North’s two Sunday services.

The church previously suggested donations of $3, though that revenue typically averaged only $1 per visitor, Ayres said. Adult visitors now will pay $8, with discounts for military members, seniors and students. Kids under 5 will still get in free, as will anyone who lives in Boston.

The historic site is set up as a separate nonprofit organization, with support from the Episcopal congregation, and during the height of the summer tourist season, Old North Church has about 50 people on its staff catering to visitors. Many of them are graduate students studying history who spend the season as educators or first-person interpreters dressed in Colonial costumes.

Old North Church prides itself on offering a comprehensive experience detailing Colonial life, Revolutionary War history and even 18th-century chocolate making. “It’s not just come and recite ‘one if by land and two if by sea’ and leave,” Ayers said. “Freedom was not just kicking the British out of North America.”

If there has been any objection to the new fee, it’s come from the tourism companies that now will have to pay to stop at Old North Church on their bus tours and cruises. Ayers doesn’t expect them to change course. Old North conducted a study that concluded an admission fee would not dramatically decrease the number of annual visits.

If you only have time for a few stops while visiting Boston, “you’re going to pick the ones on your bucket list,” he said. “The Old North is on everybody’s bucket list.”