[Episcopal News Service] More than 50 bishops of the Episcopal Church are among the hundreds of voices the U.S. Supreme Court is hearing as it considers the constitutionality of President Donald Trump’s travel bans.

The current and retired bishops have asked the court to rule that the ban violates the establishment clause of the Constitution, which prevents the government from establishing an official religion, acting in a way that unduly favors one religion over another or preventing people from exercising their faith.

The main question before the justices is whether any president can ban travel and immigration to the United States based on nationality if that ban contradicts the power over such immigration and travel given to Congress in Article I of the Constitution. The state of Hawaii and others asked the Supreme Court to review Trump’s ban. The court heard arguments in the case April 25 in the last scheduled hearing of its term.

Trump’s executive order suspends entry, subject to exceptions and case-by-case waivers, of certain categories of people from eight countries that do not share adequate information with the United States or that present other risk factors. 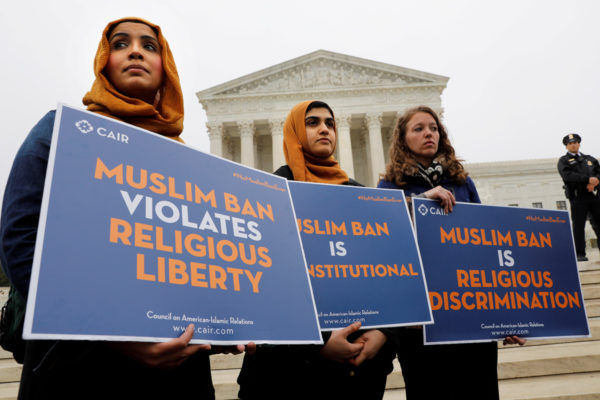 Other challengers have argued that Trump’s campaign speeches and tweets about Muslims were a clear indication that the ban was aimed at a particular religious group and not justified by security concerns. The ban sought to restrict travel from eight nations — Chad, Iran, Libya, Syria, Yemen, Somalia, Venezuela and North Korea — six of which are predominantly Muslim. Chad was recently removed from the list by the administration.

The 57 bishops told the justices in an amici curiae (friends of the court) brief that among the central tenets of the Episcopal Church is a call “to welcome and assist strangers, especially those who are poor, sick, and most in need of help, to provide a safe haven for those seeking freedom from oppression, and to uphold the dignity of every human being.

“To those ends, the Episcopal Church has long supported a robust refugee resettlement program for those fleeing their countries to escape persecution, oppression, and war,” they wrote, referring to the church’s more than 75-year-old Episcopal Migration Ministries, or EMM.

The bishops said Trump’s travel ban has “significantly undermined the efforts of religious organizations in the United States, including the Episcopal Church, to render aid to those fleeing war and oppression. For many Americans, this type of refugee-assistance work is an expression of their faith and one of the ways in which they keep their covenant with God.”

Diocese of Olympia Bishop Greg Rickel organized the amici brief effort, following his work on two similar actions when challenges to the travel ban were being heard at the federal court of appeals level. Rickel invited the church’s bishops to sign on to the brief.

The bishops were not the only Episcopalians who have raised their voices in the case. Thomas H. Kean, who was the Republican governor of New Jersey from 1982 to 1990 and chairman of the 9/11 Commission, and John Danforth, an Episcopal priest who served as a Republican senator from Missouri from 1976 to 1995 and an ambassador to the United Nations, are among a group that filed their own amicus brief. Kean and Danforth signed the brief with other former Republican members of Congress or lawyers who have worked in previous Republican administrations.

Kean, Danforth and a third Republican in that group argued April 22 in the New York Times that the Constitution grants Congress the power to make immigration and foreign travel laws, and “Congress cannot give any president the power to dismantle our immigration statutes.”

As the Supreme Court was hearing oral arguments in the case April 25, the Washington Post reported that some religious freedom groups had avoided taking a stand on the constitutionality of the travel bans and “are more concerned about how the court will consider the legal issues than they are with the actual outcome.” The article notes that other groups, such as the group of Episcopal Church bishops, the U.S. Conference of Catholic Bishops, the American Jewish Committee, the Anti-Defamation League, the Muslim Justice League and the Muslim Public Affairs Council, actively oppose Trump’s executive order.

Many observers who listened to the oral arguments seemed to think that, in the words of SCOTUSblog’s Amy Howe, “a majority of the court (and perhaps even a solid one) appeared ready to rule for the government and uphold the order in response to concerns about second-guessing the president on national-security issues.”