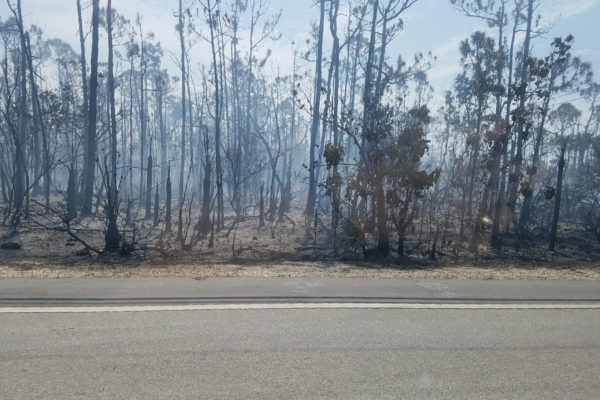 A wildfire this week burned about 100 acres, mostly forestland, on Big Pine Key, Florida, about a mile from St. Francis in the Keys Episcopal Church. Photo: Chris Todd

[Episcopal News Service] Residents of a Florida island community still recovering from last year’s Hurricane Irma were rattled this week when a wildfire broke out a short distance from the Episcopal church on the island.

The fire has burned about 100 acres on Big Pine Key, about a half-hour drive east of Key West. No injuries or fatalities have been reported in the blaze, which has mostly spared residential neighborhoods since it started early April 22. Authorities told the Miami Herald that the fire appeared to be mostly under control by midday April 25.

The fire zone was about a mile southeast of St. Francis in the Keys Episcopal Church – not dangerously close, but “enough that we were concerned, because we just got through the hurricane,” the Rev. Chris Todd, priest-in-charge, told Episcopal News Service.

Todd also leads a nearby Evangelical Lutheran Church in America congregation, Lord of the Seas Lutheran Church, which is hosting a group of crisis counselors on May 1 to meet with residents who want to discuss the recent disasters. Life on Big Pine Key has yet to fully return to normal, and tensions returned with the recent fire, Todd said.

“First by water and wind, now by fire. It’s like the elements are taking up arms against us,” he said.

Hurricane Irma caused widespread destruction when it swept across the Florida Keys in September. The hurricane’s 12 inches of rain and 130-mph winds hit the middle and lower Keys hard, damaging more than 10,000 homes. And while Cudjoe Key is where the storm made landfall, the impact on Big Pine Key was severe. 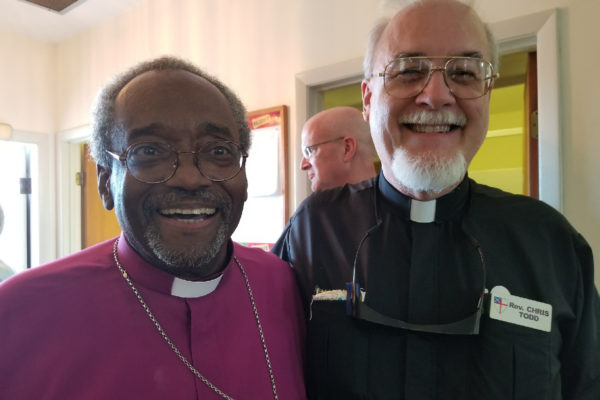 Presiding Bishop Michael Curry, left, poses for a photo with the Rev. Chris Todd during a January visit to St. Francis in the Keys Episcopal Church. Photo provided by Chris Todd

Presiding Bishop Michael Curry visited the Keys in January to offer his support on behalf of the Episcopal Church. St. Francis in the Keys was one of the churches Curry visited.

Todd said the island’s Roman Catholic church likely will have to be rebuilt, while the United Methodist church was hit by severe flooding. Todd’s two churches fared better, but Irma damaged the roof of St. Francis in the Keys. Its tile floor will need to be replaced because of flooding. For the first two and a half months, the congregation worshiped with the Lutherans at Lord of the Seas, which is built on stilts and sustained only damage to its gutters. 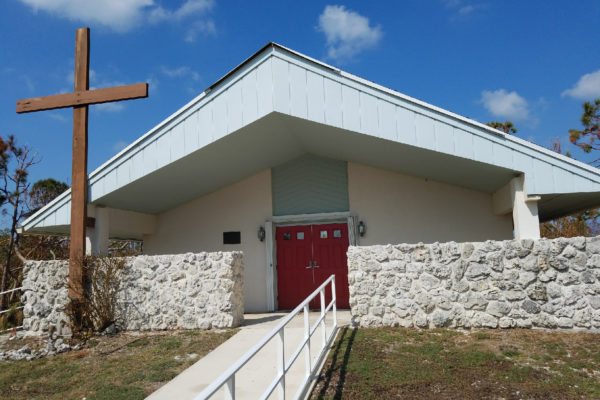 Irma damaged the roof of St. Francis in the Keys Episcopal Church and flooding will require floor tiles to be replaced. Photo: Chris Todd

Todd and his wife fled the island before Irma hit, staying with family in northwestern Alabama. When they returned to their home, they found a hole in the roof and the space under the house flooded, which knocked out their air conditioning and other utilities. A tarp still is being used to patch the roof, but the rest of the damage has been repaired.

Others on the island weren’t so lucky.

As for the fire, it mainly has affected forested areas of the island, Todd said, but it’s still “kind of scary, because down every dirt road somebody lives.”

The Florida Forest Service said on the first day of the fire that two homes had been destroyed. Authorities have not ordered evacuations, though there were reports of some displaced residents.

Power was cut to the island when the fire first ignited, but it has since been restored. The cause of the fire isn’t yet known. Authorities don’t think it was started by lightning or other natural causes, according to the Miami Herald.

The emergency response involves 46 firefighters and several bulldozers and fire trucks, as well as helicopters dropping water from above. 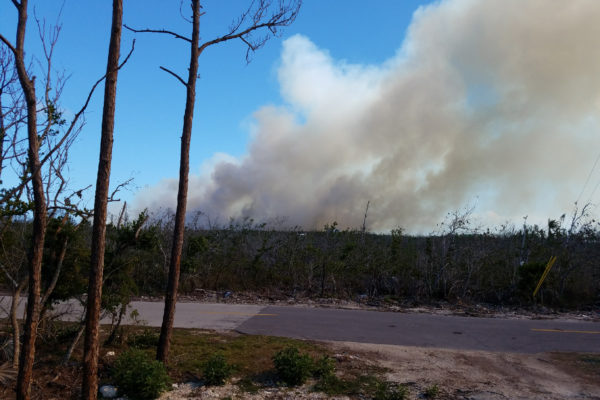 From the Rev. Chris Todd’s porch on April 22 smoke could be seen rising over the tree line where a wildfire had ignited earlier in the day. Photo: Chris Todd

The fire prompted Bishop Peter Eaton to send a message April 24 to the Diocese of Southeast Florida asking Episcopalians to pray for the community of Big Pine Key. “The fire is widespread and a real threat,” Eaton said. “It is also a further drain on an already challenged community that still has so much to do to recover from Hurricane Irma.”

Todd said he and his wife have watched the helicopters fly over their home as smoke rose on the horizon over the trees. He and others on the island are hopeful that the worst of the threat is behind them.

“The response has been amazing,” he said, “very fast.”